On Wednesday, Kaliji gave two programs. The first was at JSS College of Arts, Commerce and Science in Nanjanagud (about a half hour from Mysore). 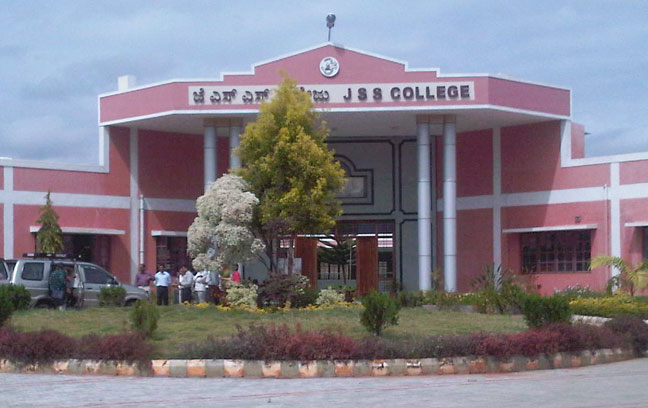 This institution is one of 366 JSS Educational institutions begun in 1968 by the 23rd guru in this lineage, His Holiness Sri Sri Shivarathri Rajendra Mahaswamiji. 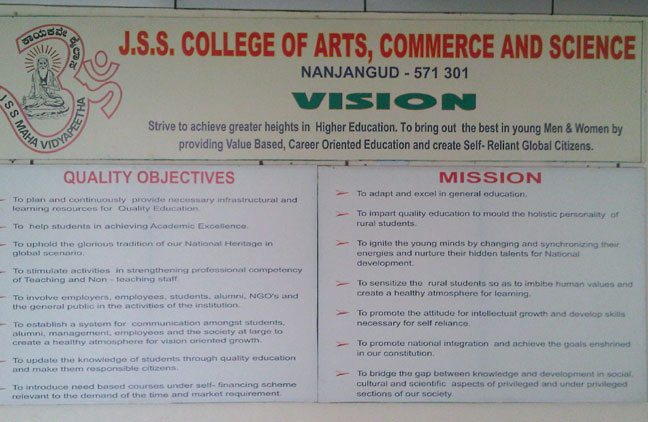 After arrival, Kaliji’s hosts gave a tour of the large, modern facility with a plethora of science, computer and language labs, libraries and classrooms, bringing higher education to an area that is considered backward. 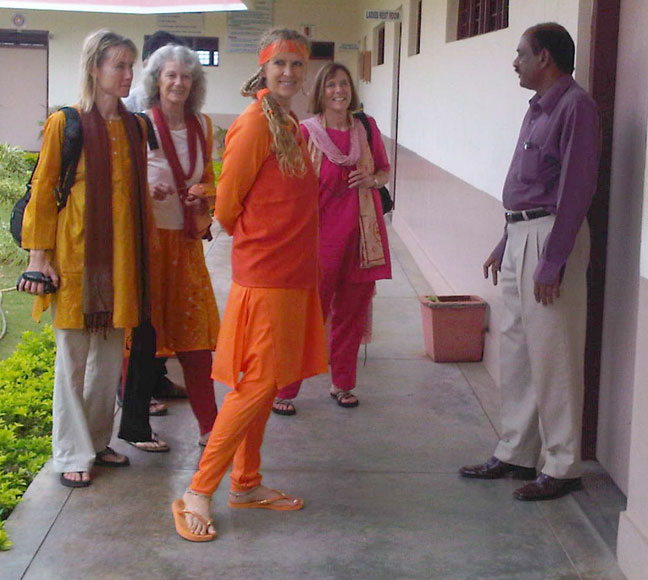 Assisting on this yatra have been Katya, Eva-Maria, and Nandi. Here, they are entering the principal’s office. 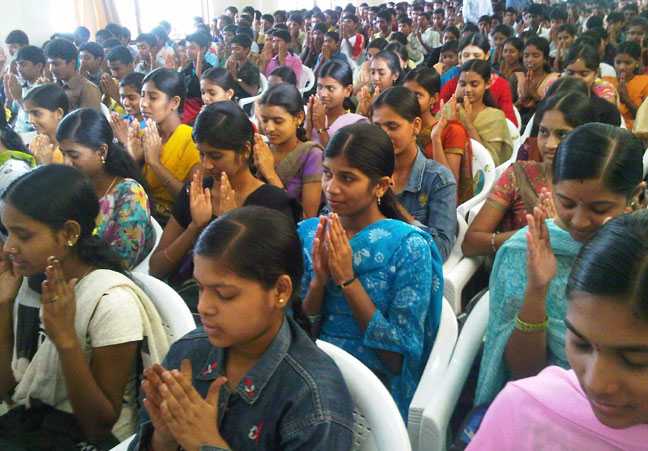 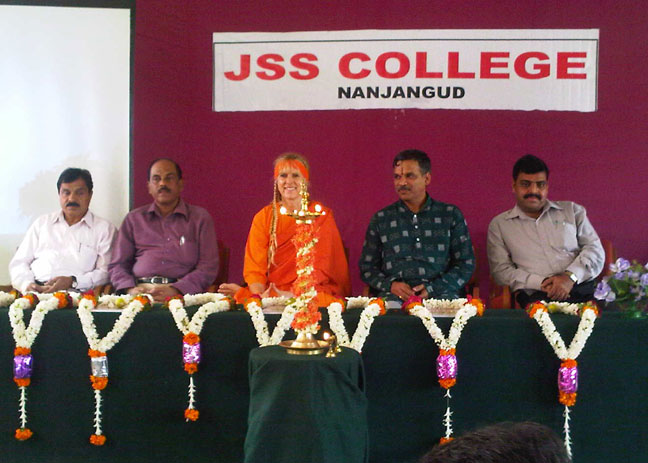 The program began with the chanting of a Sanskrit prayer followed by honoring guests with a beautiful garland and prasad, first to Swamini Kaliji. 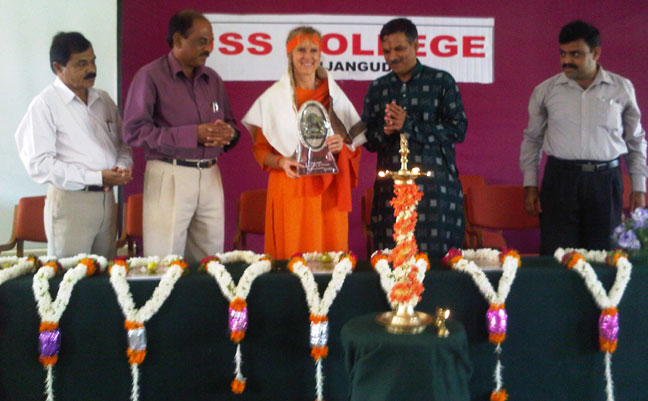 This was followed by the traditional lighting of the lamp, begun by Kaliji. She was then further introduced and ceremoniously honored with a shawl and gifts. 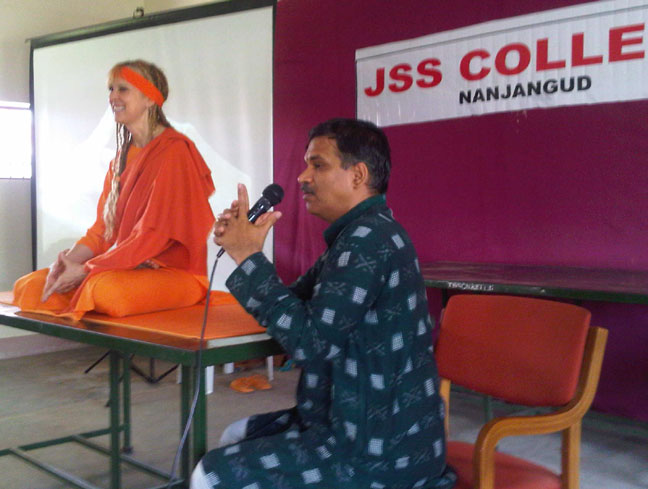 Then Kaliji’s talk began with her comments on the college and honoring of India’s heritage of yoga, Sanskrit and the Vedas that is so deeply a part of each individual.

She asked: What makes a good or smart student? Qualities such as concentration and memory power, as well as increased prana that will expand consciousness, can be developed through a yoga practice, improving the qualities that make a good student.

Kaliji spoke of the pancha pranas in relation to posture-asana in the classroom, and elements and chakras. With more space within a posture, this opens udana prana of 5th chakra for better mental clarity. Then the focus on the breath in the classroom, as well as concentration-mudra of hands, eyes and mind. These are simple effective yogic techniques toward becoming a better student. 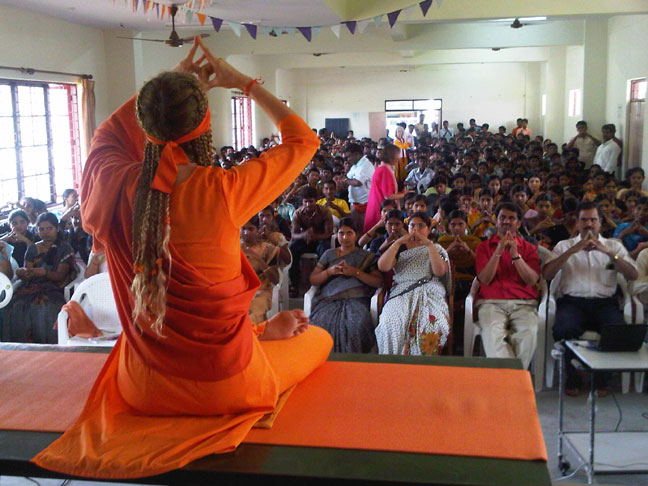 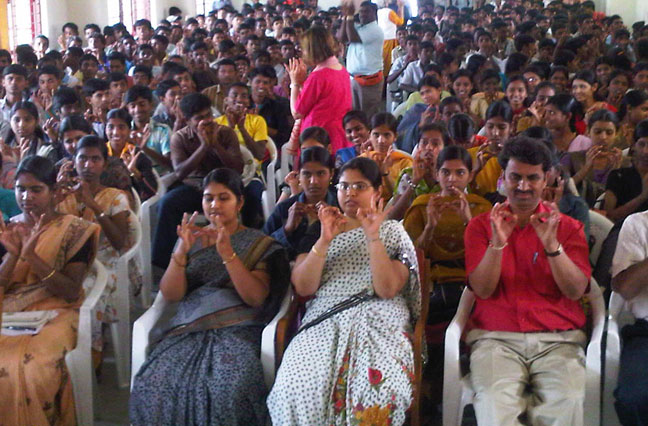 This followed with a focus on mudra. 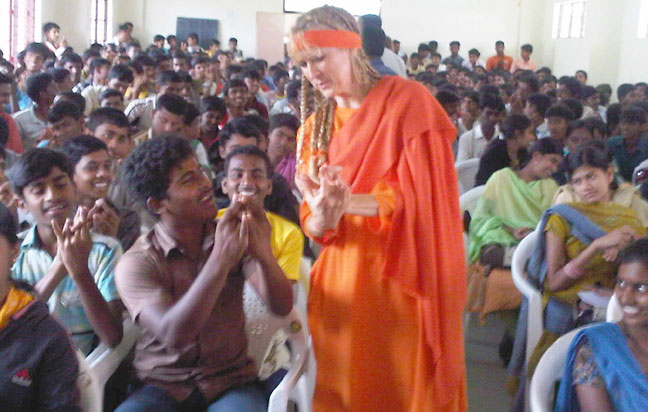 The students learned some mudras and were very excited to learn Devi mudra. The slide presentation of 108 Devi mudras was shown as the students intently observed. Kaliji explained how they came from Kriyavati siddhi. 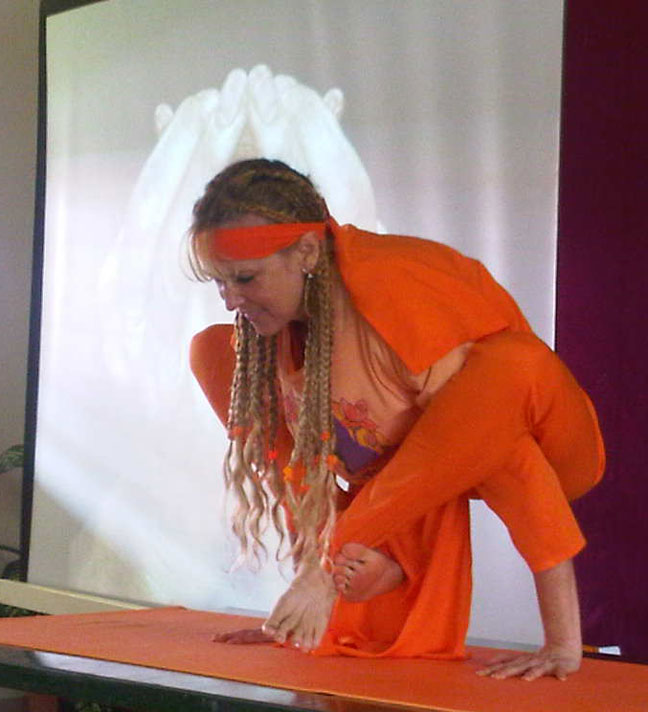 The TriYoga program concluded with Devi Dance, accompanied by Sanskrit prayers chanted by Dr Pai and the audience.

Although the demonstration was performed on a smaller harder-type table/platform, it looked like Kaliji had all the space in the world as she did a beautiful flow of TriYoga Prasara. The audience was completely mesmerized and repeatedly responded with applause.

Kaliji concluded, “Take with you a relaxed body, a rhythmic breath and a focused mind and you will always have yoga with you.” 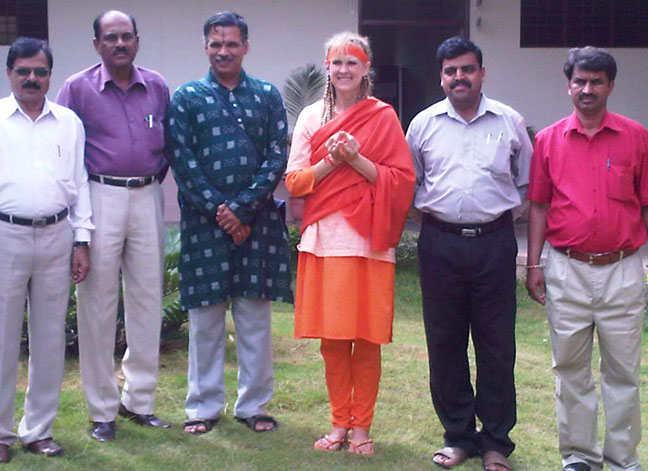 Kaliji and Dr. Pai with the principal of the college and his colleagues

Kaliji, always gracious, always perfectly present, always in the flow, brought jnana and joy to a very happy audience of hundreds of students, staff and college administrators at JSS College of Arts, Commerce and Science. 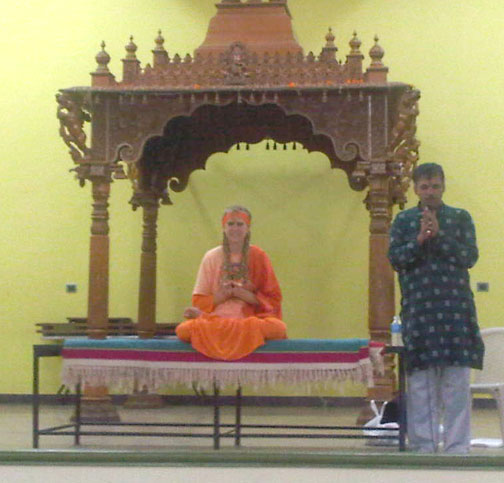 The second program on Wednesday was at Maharshi Public School in Mysore. This school is known as an Indianized school, (pure Indian culturally). The school is open to everyone, regardless of background. The educators here teach how to live life ecstatically. The education includes Sanskrit, meditation, pranayama, how to cleanse the body and how to be always happy, as well as other subjects.

One fact of interest about the students is that in one year they have recited 10 billion rounds of the mantra OM Namah Shivaya.

At the opening reception, Kaliji and her team each received a fresh coconut, first drinking the coconut milk and then eating the coconut.. 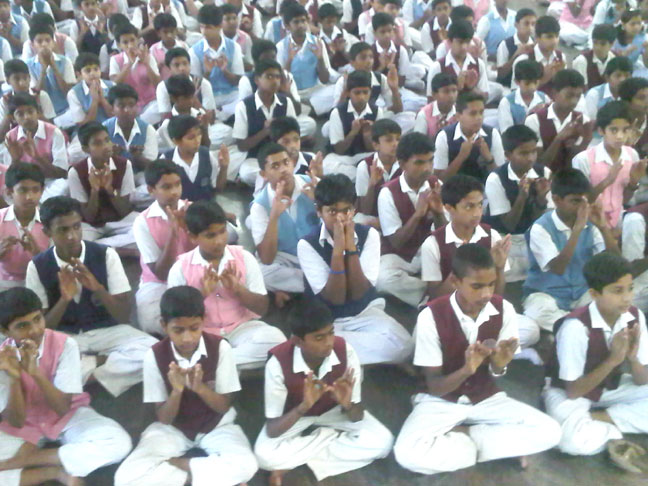 The program began with Sanskrit chants led by Dr Pai, and recited loudly by the over 100 completely focused young students. (At programs everywhere the attendees sit cross legged directly on the floor.) Dr Pai, using an interactive teaching style, reviewed the 8 limbs of Ashtanga yoga and the meaning of kriyavati siddhi. As he does at every program, he playfully led the students in energy and concentration games. 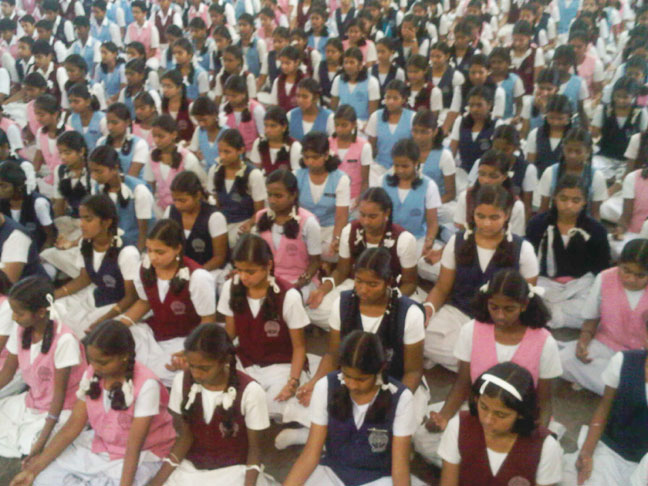 At this point new students entered the auditorium and the audience swelled to over 600.
Dr Pai led the group in Sanskrit chants, in which the students loudly participated.

Kaliji spoke about the seated posture and the smooth rhythmic breath. When she demonstrated her long exhalation, the students responded with excited applause. She then demonstrated Leg Stretch. At the depth of her stretch, the audience again loudly applauded. Kaliji had the students hold their hands in tight fists and explained how the leg muscles can hold that kind of tension. She recommended that they do Leg Stretch every day for 5 minutes per leg to release this type of tension and improve their health.

Kaliji said that we need to take care of this body and to start now. Eat a pure vegetarian diet. This is ahimsa for you, ahimsa for the animals and ahimsa for ecology, the environment. Do pranayama. This will result in a longer, healthier life and greater memory power. 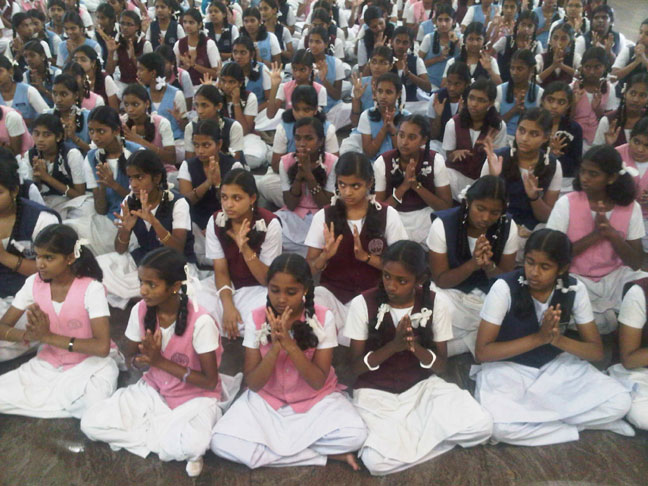 Then mudras, including Devi mudra, were taught. 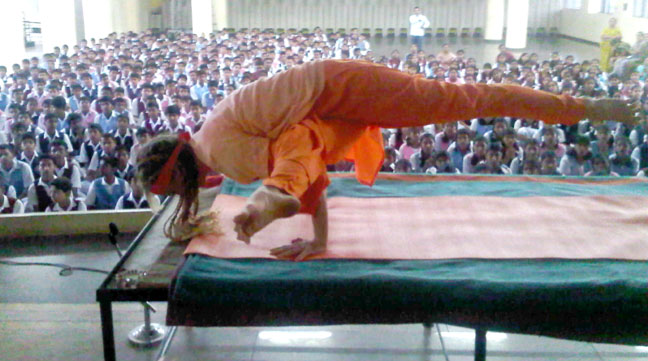 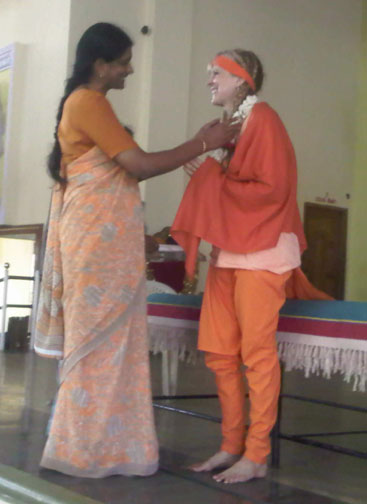 Kaliji is thanked with a beautiful garland at the end of the program. 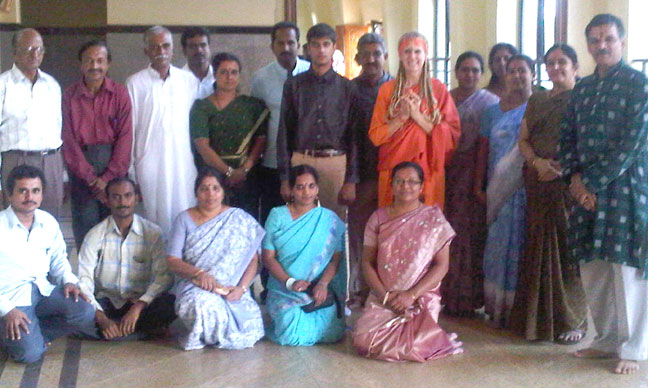 There are around 110 professors at the school. Here, Kaliji stands with some of the teachers. 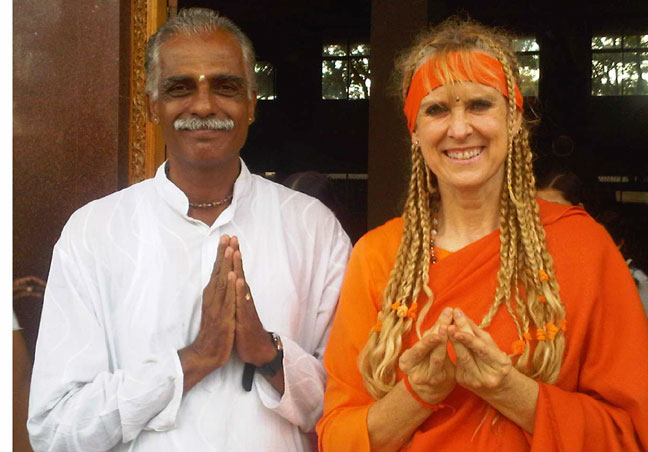 This professor teaches Yoga Awareness to the children. He says all should be happy ~ when one is happy, life is good.

Everywhere, students want to have their photos taken with Kaliji, as they ask her to return again and again. 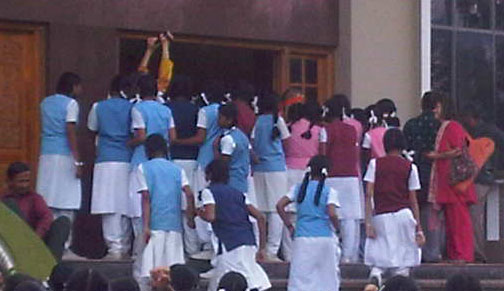 Students gather to see Kaliji off and surround her as she prepares to depart. 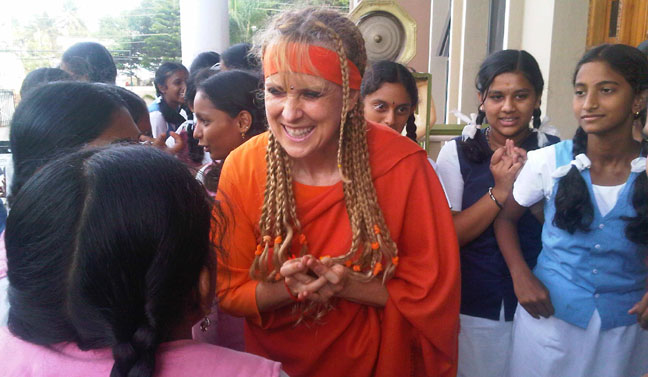 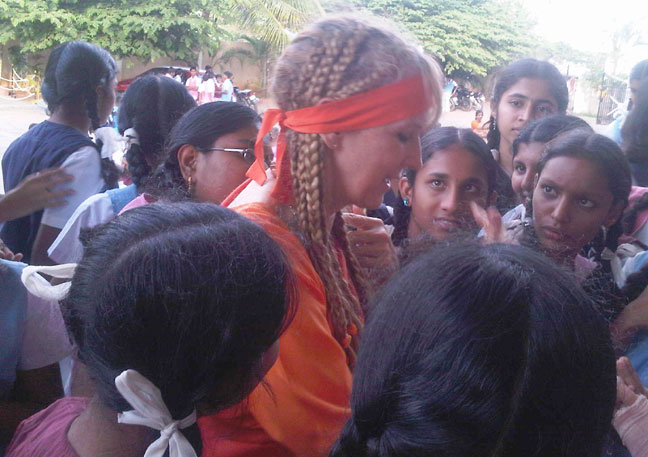 This completes the 10-day TriYoga Vidya Yatra organized by the Respected Dr. Raghavendra Pai, founder of the VedaVyasa Foundation. During these 10 days, over 10,000 homes were reached, as well as thousands more through the media coverage throughout the tour.