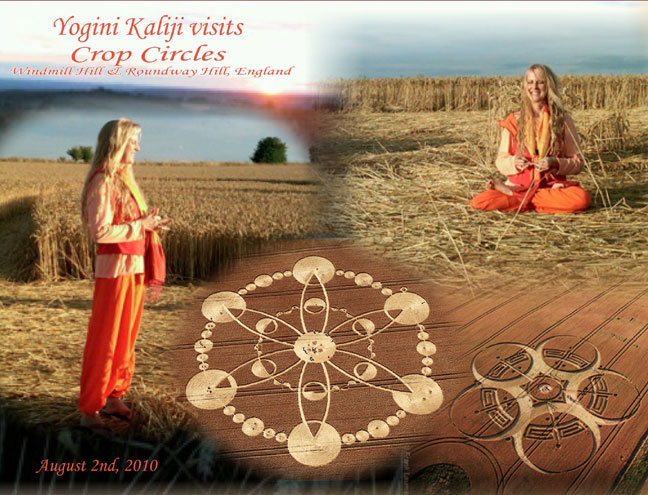 Crop circles have continually grown in frequency and complexity. They have occurred in over 22 countries, with the center of activity in Wiltshire and Hampshire, England. The season in England generally starts in May in the oilseed rape (canola) crop, continues in late May and June with the barley crop, and climaxes in the wheat crop in late July and early August. In recent years circles have appeared nearly daily at the height of the season.

The crop circle research community is dedicated and diverse. Crop circle websites are rich with information: cropcirclereporter.com, temporarytemples.co.uk, silentcircle.co.uk, and cropcircleconnector.com are great resources for learning about the crop circle phenomenon. 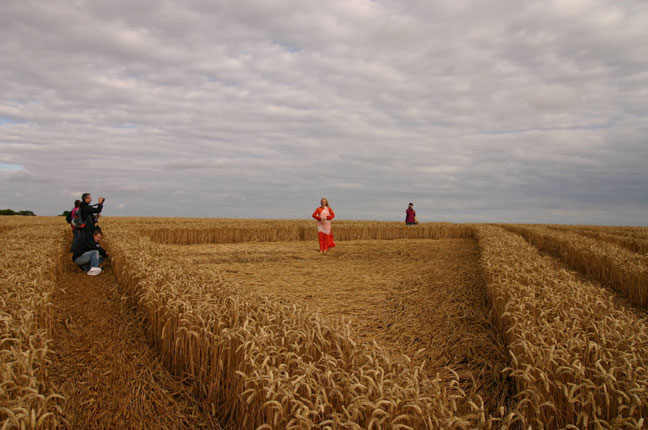 Kaliji inside a triangle in the Whitefield Hill crop formation. This formation in particular represented the energy of TriYoga, with large triangles bordering a circular center of flowing, waving lines. This was the most recently formed crop circle the group visited, and the precision, perfection, and beauty of the circle was astonishing. 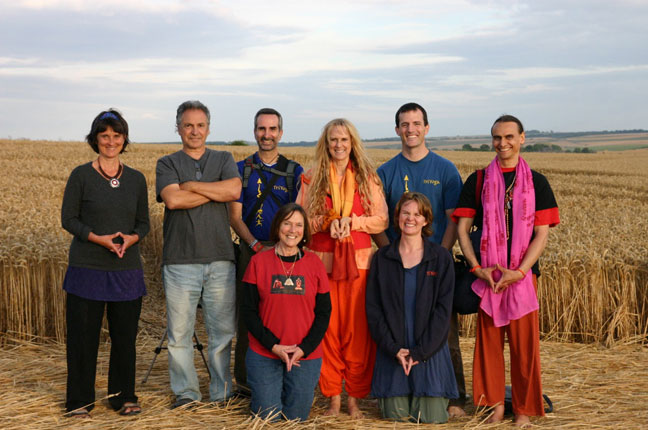 The group inside the Windmill Hill formation.

During her visits, the flow has brought Kaliji into contact with leading crop circle researchers. 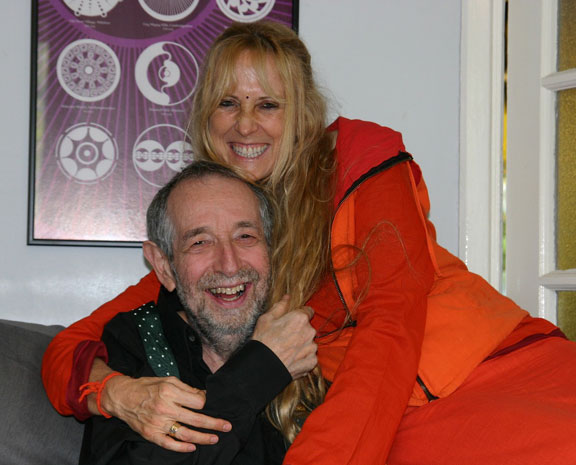 The group made a visit to the home of Michael Glickman, one of the earliest crop circle researchers. Michael’s research has focused on the geometric and numerical symbology within the formations, and his insight into crop circle quintuplets led to the discovery of new methods for squaring the circle. Michael has published a number of crop circle books, DVDs, and posters. His most recent book, Crop Circles: The Bones of God is available online. Michael continues to lead crop circle research, and attracts researches and enthusiasts from around the world.

A fascinating evening was spent in Devizes with researcher Gary King (left photo). One of the most sought-after guides during the crop circle season, Gary is also in the forefront of crop circle research, focusing on how humans can derive meaning from the symbolic nature of the crop circles. On July 7, 2007 Gary was witness to one of the most dramatic events in crop circle investigation. While leading a night watch at the famous East Field site, Gary and a group caught the formation of a crop circle on video. The event consisted of a 4 microsecond flash of light, and resulted in one of the largest crop circles ever seen. Michael Glickman and Gary King cooperate to produce the site cropcirclereporter.com. Their video blogs are a fantastic resource for those interested in crop circle research.

Kaliji with researcher Professor Jonathan de Vierville outside The Henge Shop in Avebury (center photo). Kaliji “coincidentally” encountered Professor Jonathan inside the shop on the first day of the tour, greeting him with the words “I was hoping I would see you again!”. Jonathan graciously offered assistance by carefully marking the map with the locations of all current crop circles, and giving Kaliji and group up-to-date information about crop circle conditionsâ€“a perfect flow to begin the tour! With Kaliji, such “coincidences” are revealed to be regular and natural results of living in the flow.

TriYoga student James Reeves joined the group for a day of sightseeing (right photo), pictured here inside the Whitefield Hill circle. James has his own yoga studio, Bliss Divine Yoga, in Oxford. For more information, visit his website at blissdivineyoga.co.uk. 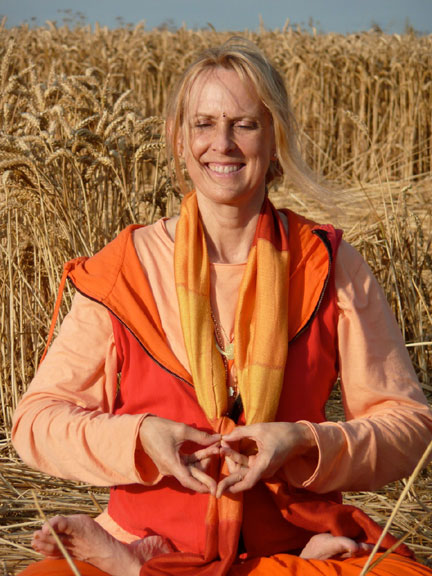 The energy of hasta mudras are mirrored in the geometric energy of the crop circles. Michael Glickman, Gary King, and Professor Jonathan were all drawn to Kaliji, recognizing the “crop circles” in her hands. 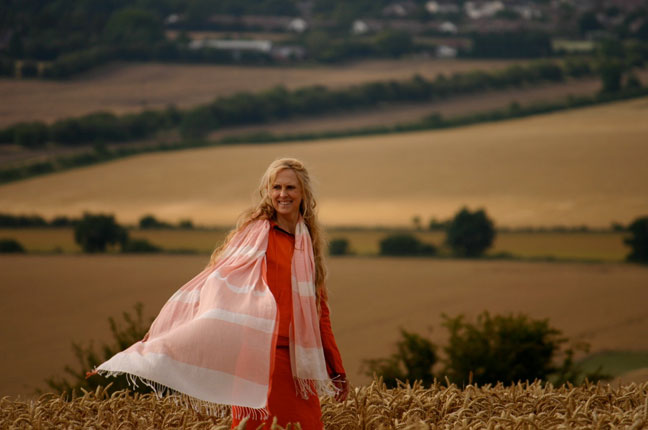 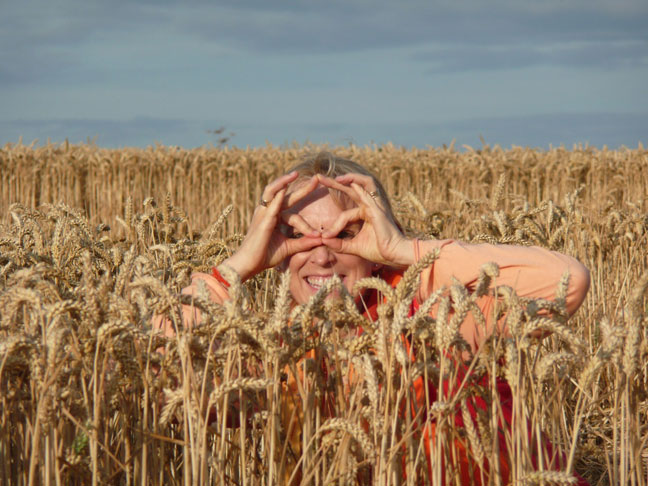 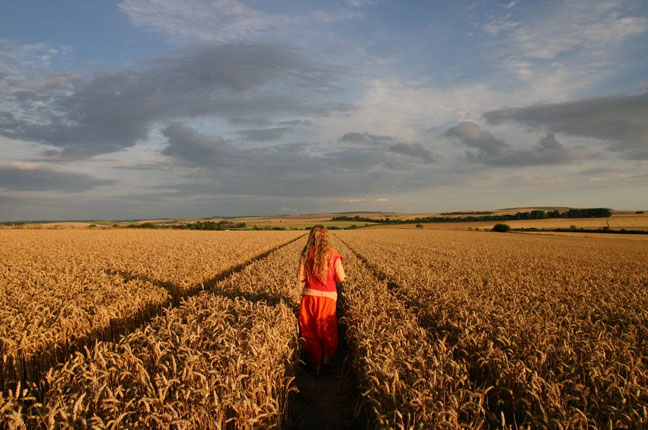 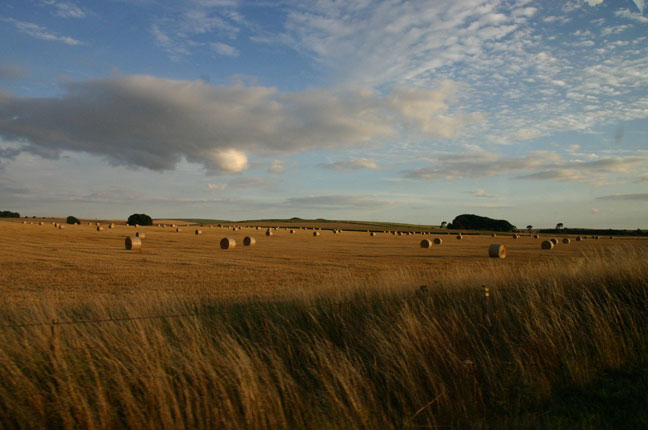 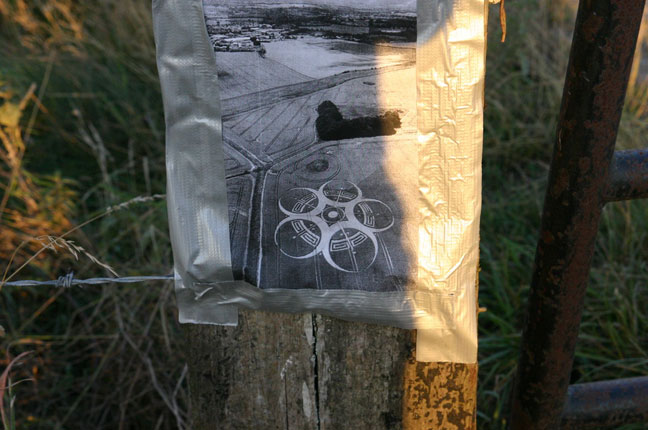 The Roundway Hill formation. Reaching this crop circle at sunset was a magical experience. The lay of the wheat inside the circe gave a palpable sense of rushing water. 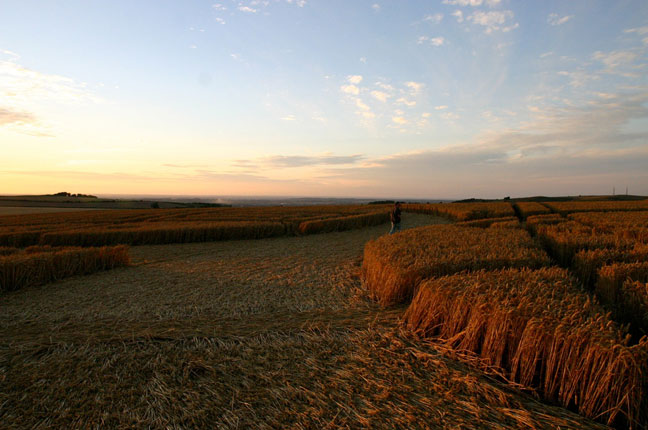 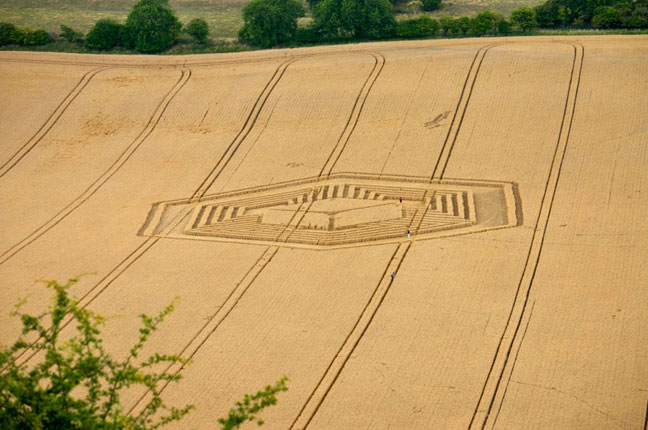 A hilltop road over the Fosbury formation allowed for a wonderful view of the entire circle and it’s wonderful three-dimensional cube. 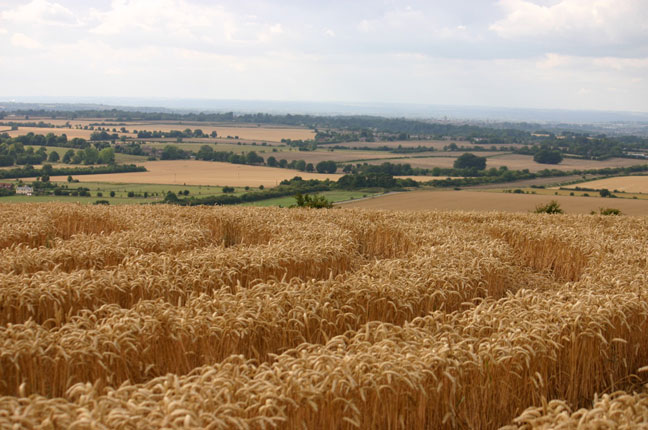 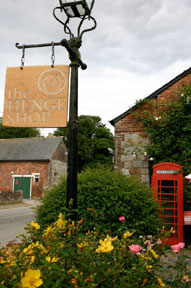 The Henge Shop in Avebury, located within the stone circle, is an information center for the crop circle community.

Inside, a large map includes locations of the season’s crop circles, along with their photographs. The Silent Circle, located this year in the village of Yatesbury, is a another center for the crop circle community. 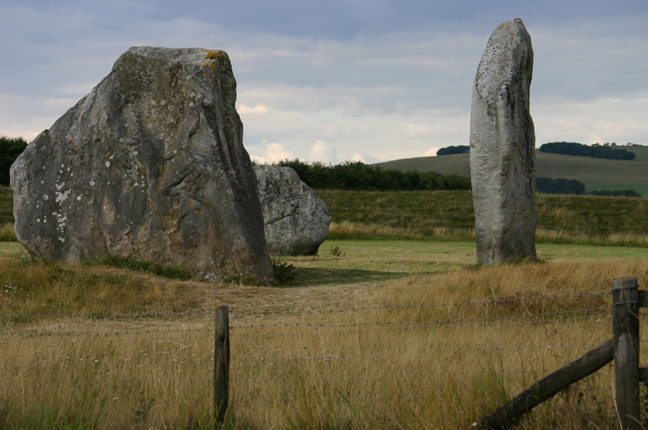 The crop circle tour also included visits to the stone circles at Avebury and Stonehenge. 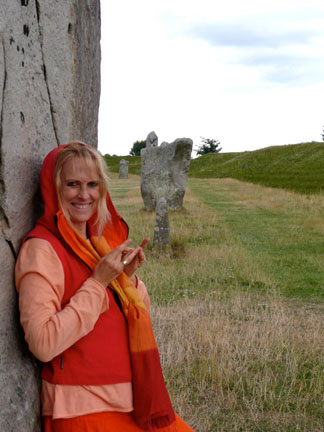 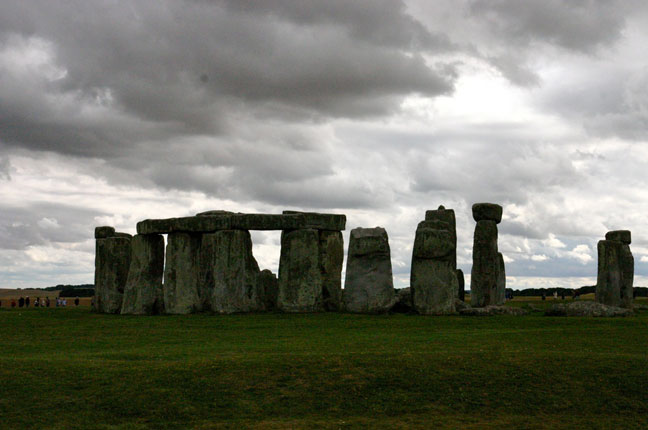 Kaliji’s trip to England would not be complete without a visit to TriYoga’s England home at ASHA center in Gloucestershire. Founded by former author, activist, and former parlimentarian Zerbanoo Gifford, the ASHA center is dedicated toward pioneering leadership and personal development projects with young people from around the world. 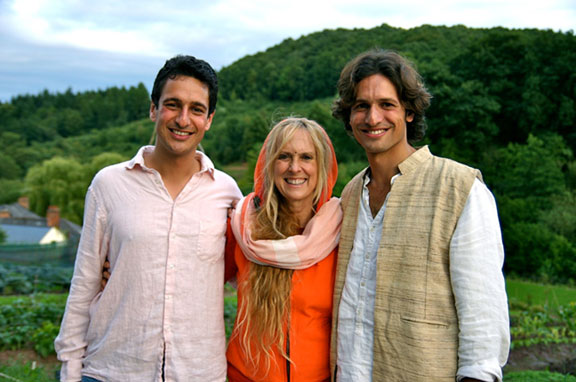 Kaliji with Mark and Alexander Gifford, both actively involved with operations at ASHA centre. 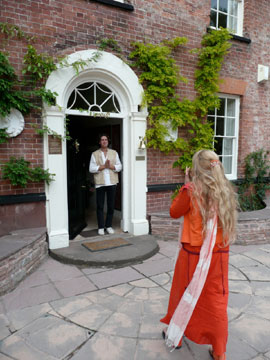 Alexander is thrilled to greet Kaliji upon her return to ASHA! 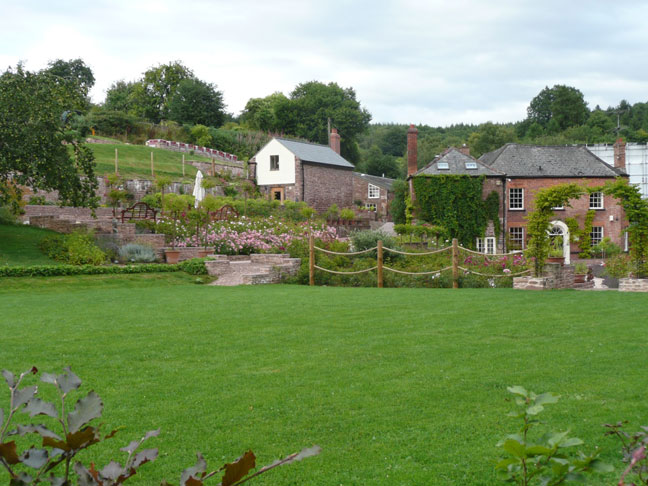 The biodynamic garden at ASHA is simply breathtaking. The group was fortunate to visit the gardens at the height of the summer season. 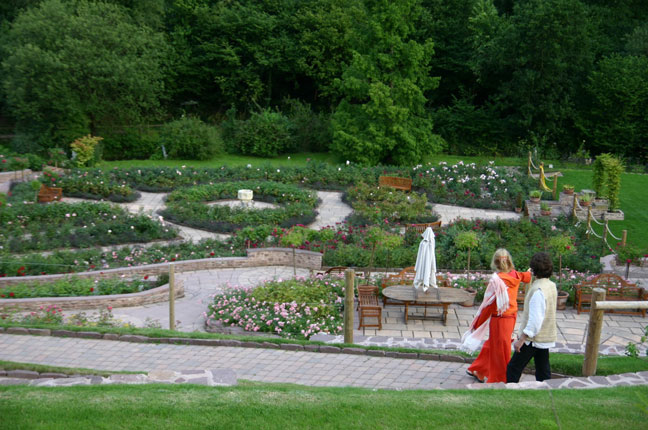 Kaliji and group enjoyed an evening in London before driving to Wiltshire. This visit was all part of another amazing flow story, as a long string of events, including an unexplained and temporary car problem, a missed turn, the decision to sightsee instead of a restaurant, and Kaliji inexplicably walking at half her usual pace, culminated in Kaliji’s “chance” meeting with an Indian woman in the Westminster Tube station as the group was leaving London. The woman immediately recognized Kaliji as a swami and sanyasi, and eagerly invited Kaliji to her home in Delhi to teach at their regular satsang. With Kaliji one learns to expect the unexpected and to recognize the magic of the flow! 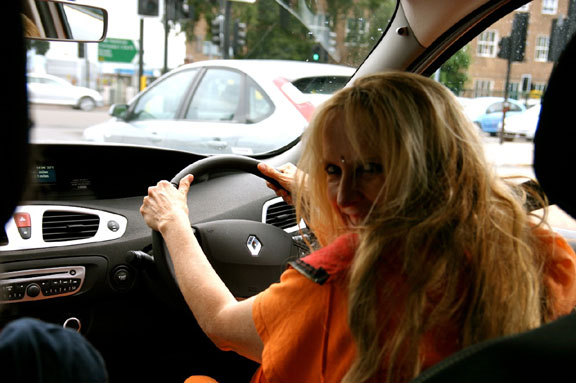 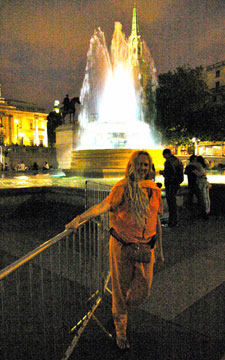 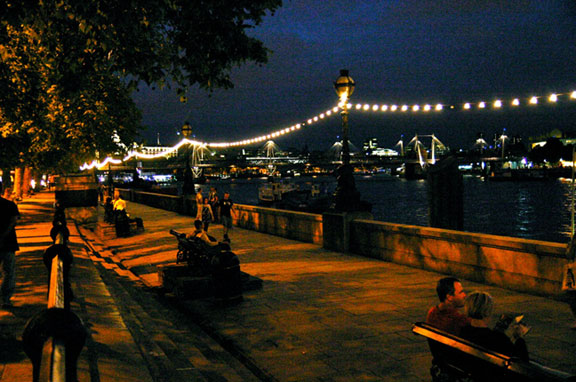