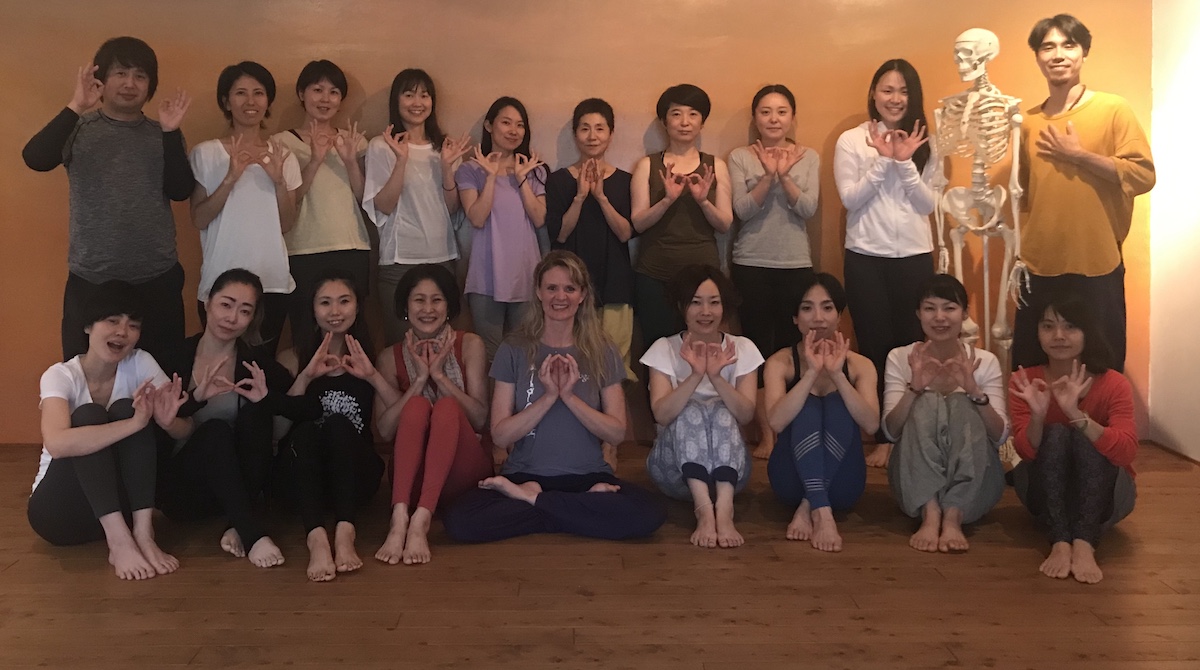 TriYoga Japan hosted a series of programs June 1–11 at Tamisa Yoga in Kyoto.

The two weekends were with the 5th Basics TT group, which has interns from all over Japan.  One of the highlights was a 5-hour Vegan course with Kelli, who join the group via Skype.  Though Japanese students are often shy and seldomly ask questions, this group was so fascinated by the topic that they asked many questions, and asked for the powerpoint handouts so they could share the information with their friends and family.  (Lakshmi also joined via Skype, showing how love comes in all forms!)

They also were encouraged to have at least one vegan meal in the days in between, and share a picture of what they ate.  All were amazed that Japanese cuisine naturally contains many vegan foods, and the adaptation was not as challenging as many had guessed it would be.  At the beginning of the program many were asking “What is vegan?” , and by the end, several had plans to change their diets.

TriYoga Japan hosted for a meal at Veg Out, a vegan cafe which is also owned by Yoko (TY teacher and owner of Tamisa).  At the dinner, many shared their “TriYoga Stories”, and intern Saki, who is trained in traditional Japanese dance, gave a short demonstration as her testimonial– that TriYoga is a dance of yoga.

And there was a vegan pot-luck on Saturday, where each student brought a dish to share.  It was a great variety of made and prepared foods, as well as many fruits, vegetables, soup and dessert.  There is a local vegan restaurant, Choice,  that makes vegan cheese and all were surprised by its delicious flavor and nice texture.

In addition to Physical Anatomy, Subtle Anatomy and Prana Vidya that were part of the Basics TYTT, Santoshi also taught a 15-hour TriYoga Prenatal course, which had students from every teacher training group, and some new to TriYoga.  One student, 7 months pregnant,  travelled from Oita in the far south of Japan to join the course and said it was very informative, relaxing, and also gave her lots of energy.

As always, teachers from previous years joined as assistants, sharing their knowledge & enthusiasm with the new interns.

All are looking forward to Yogini Kaliji’s return to Japan in the fall!