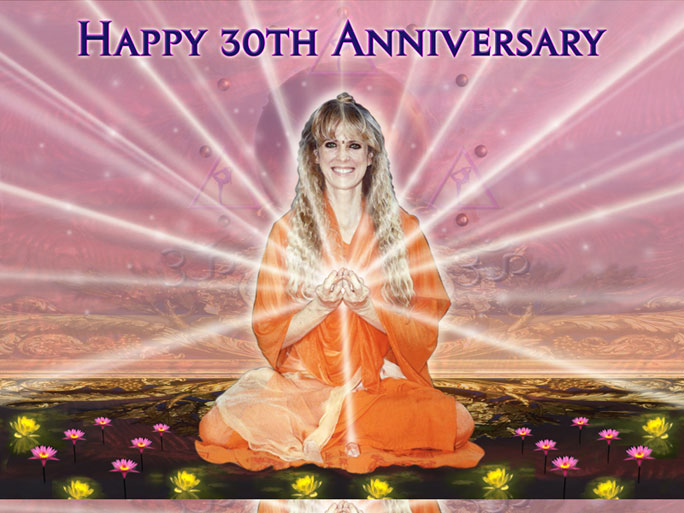 TriYoga’s 30th Celebration continued in Malibu. The timing, as it always happens in TriYoga, could not be more perfect. The first day, the 29th of January, did not only come to an auspicious number of 11, but it also happened to be the full moon. Not just any full moon, but the brightest and the biggest full moon of 2010. 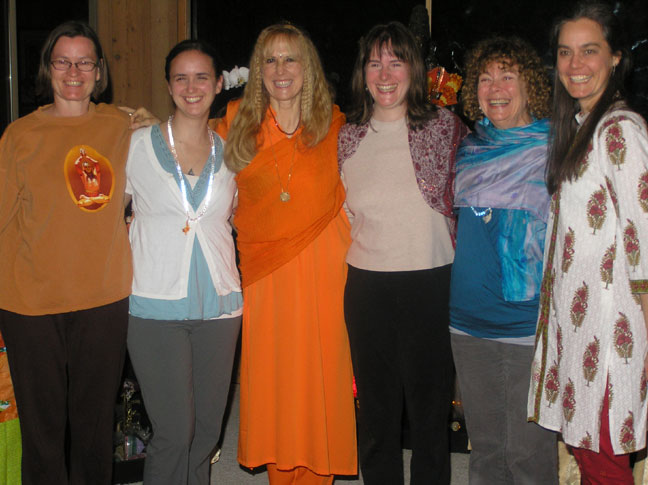 Over 60 TriYogis came to Malibu from different parts of California, around the US (AZ, FL, MA, MI, NY, PA) and Europe (Austria and Switzerland). For all of them, a Kriyavati celebration is like a family reunion. The excitement fills the room when all get to meet, greet and hug each other.

On Friday, after a morning tea party and a yummy vegan breakfast made by Kelli, all joined together for the flow session. 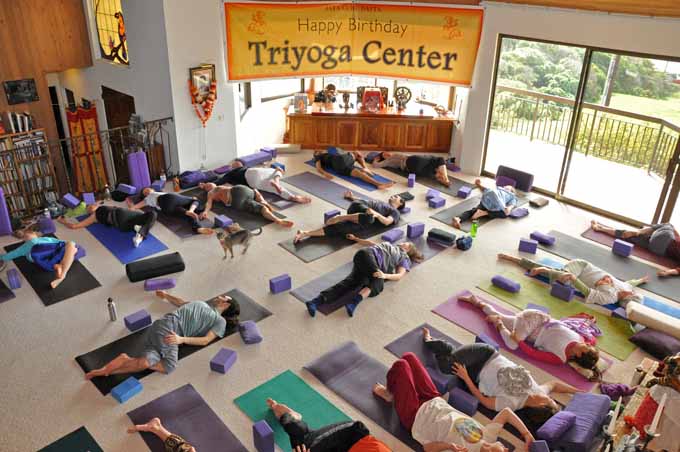 Five hours of flows with Kaliji pass by so quickly. It seemed that it had only just begun when it was already time to say the concluding Jaya Guru Devi and proceed to the other exciting parts of the celebration program. There were two sessions each day for the rest of the weekend, so that all 60 could flow. 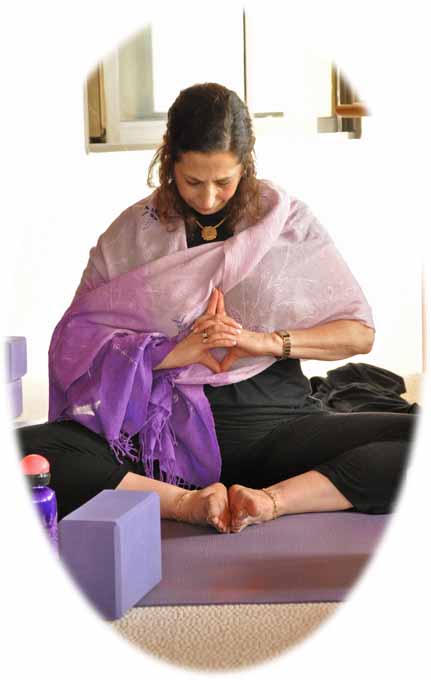 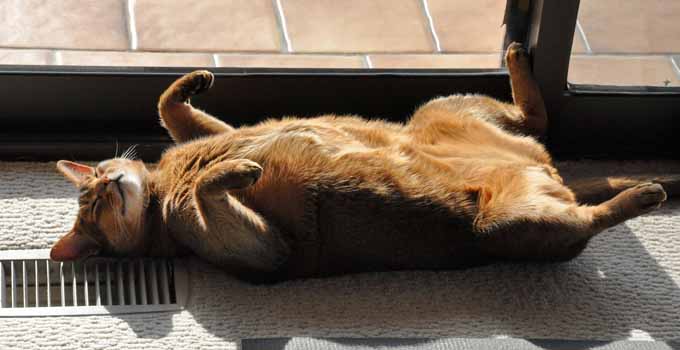 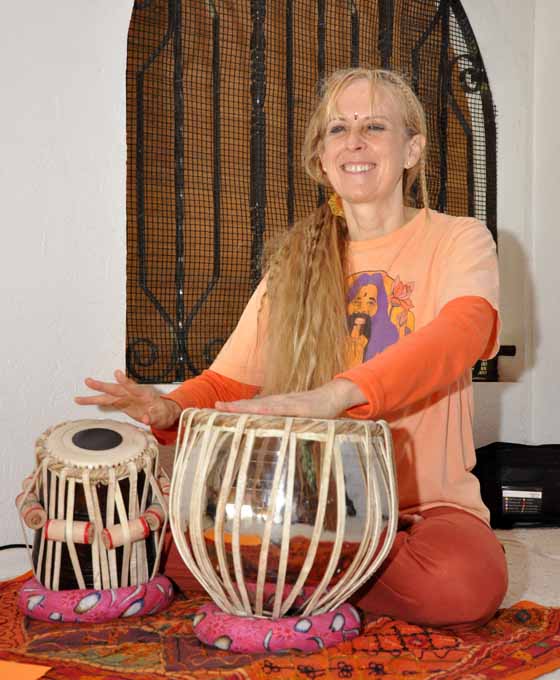 During one of the classes, Kaliji continued to guide the class… while playing tabla! Kaliji took her first class in tabla at the end of December in India. The teacher, tabla master Prasann, said that she learned within just three classes what usually takes students a year to learn. He was so impressed with her playing that he asked her to perform for his whole family, saying to them that he cannot take credit for her outstanding achievements in playing, as he always teaches the same; yet, he had never seen anyone able to remember the rhythmic patterns and play them so well in such a short period of time! Everyone in the class was quite impressed with Kaliji’s playing too and appreciated musical accompaniment. It deepened the meditative flow and the amazement at the magic of Kaliji. 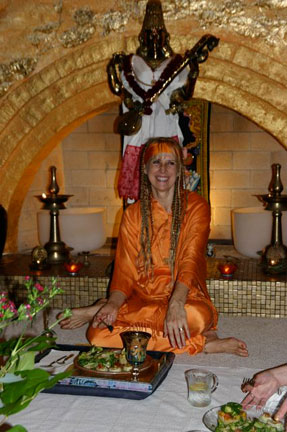 When family comes together, the kitchen is an exciting place. So was the kitchen in the Malibu ashrama, where vegan meals were prepared daily. Kelli was the chef of the meals and all the others were helping chopping, cutting, organizing and, of course, laughing. It was great fun. TriYogis like to be artists in every aspect, so the dinners were not only delicious but also looked like a piece of art on a plate. 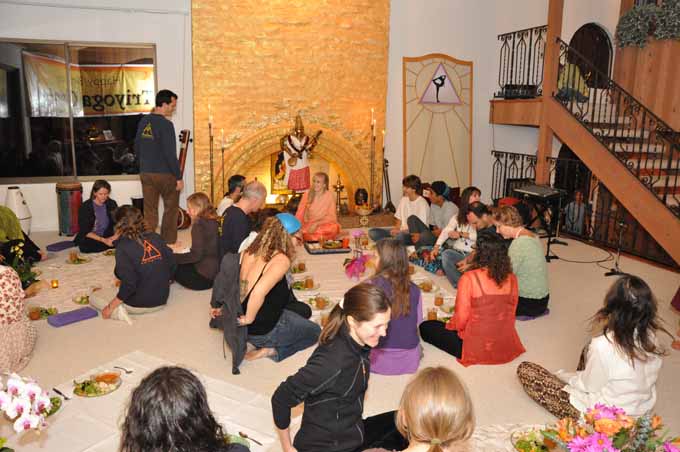 Once the bodies were nourished, all got together for evening chanting, music and more.
Each evening more TriYogis joined in… now from China and Russia, via Skype! How fortunate we are to have this technology! 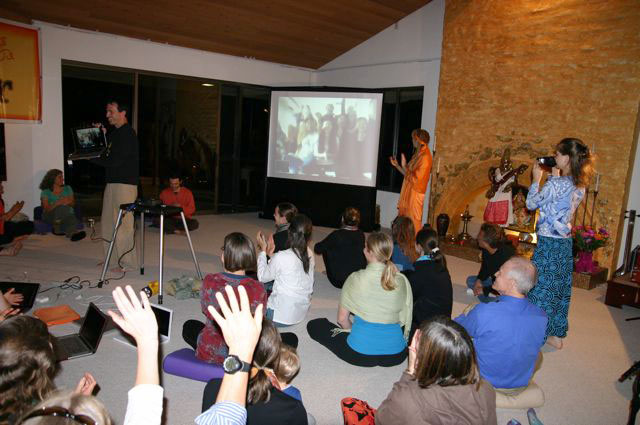 On Skype with Chinese students, shown on a large screen, while John pans the room with computer camera so they can see the group in Malibu

The Chinese students coordinated the time of their satsang to match California’s time zone. They were so happy to talk to Kaliji and say Jaya Guru Devi to everybody in the room. Kiki, Level 3 TY teacher who arranges TriYoga programs in China and who just traveled to India with Kaliji, translated for the group. 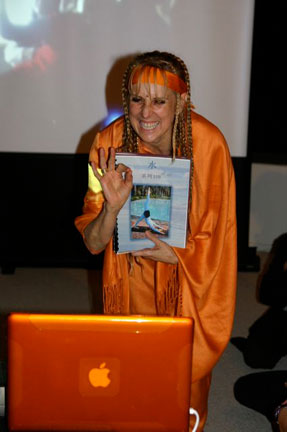 John and Stephanie, who have been teaching in China for over half a year, presented to Kaliji a surprise from their students: the 108 flow booklets translated in Chinese. The Basics manual in Chinese will be completed this year.

The Russian group got together at 7 am, flocking around the computer screen to greet Kaliji and to enjoy the Sunday chanting session.

The week-end was full of beautiful surprises. 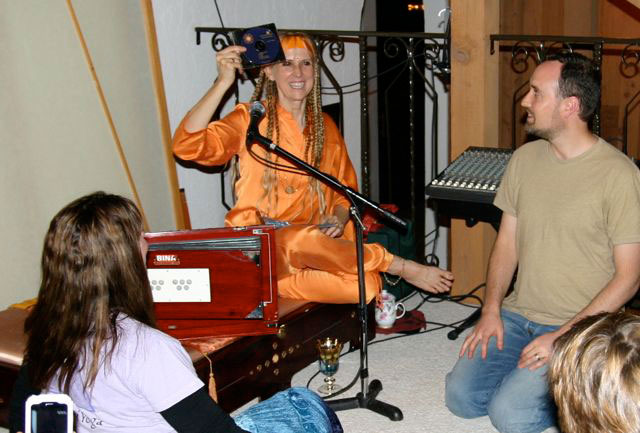 Nada and Daya released a music CD ~ “The Power Beyond the Universe”. “These are the songs that I wrote inspired by Kaliji”, said Daya, “Nada transformed them into amazing beautifully arranged pieces. And, what a honor for us, Mercury Max played the saxophone”. 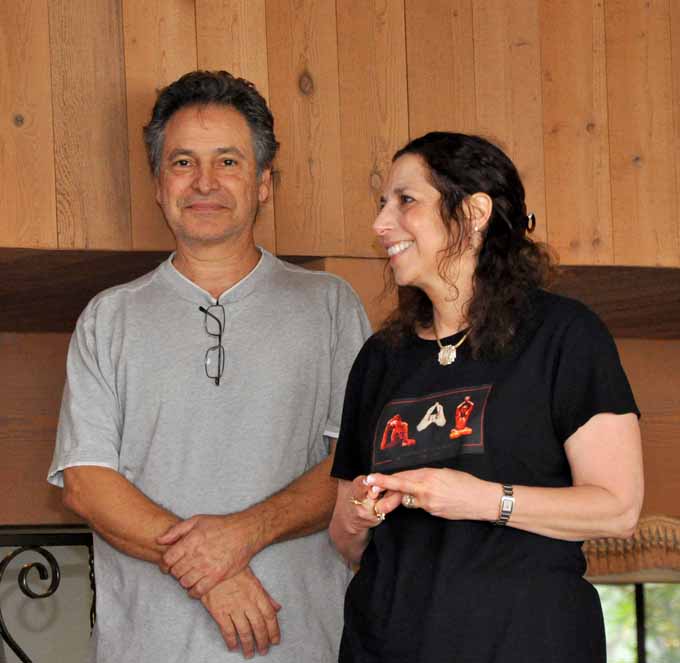 The lyrics, music and arrangements are profound, moving and full energy. All loved each of the 5 songs. While listening to them some were with the eyes closed, others danced – and all were filled with the appreciation for Kaliji and her presence… for that Power Beyond the Universe.

That feeling expanded even more when Kelli shared a powerpoint presentation that tells Kaliji’s story from January 5th, 1980 to the present. Many had happy tears in their eyes.

The evening concluded with watching movies from Kaliji’s recent trip to India, beautifully edited and set to Sri Swamiji’s music by Ganga. 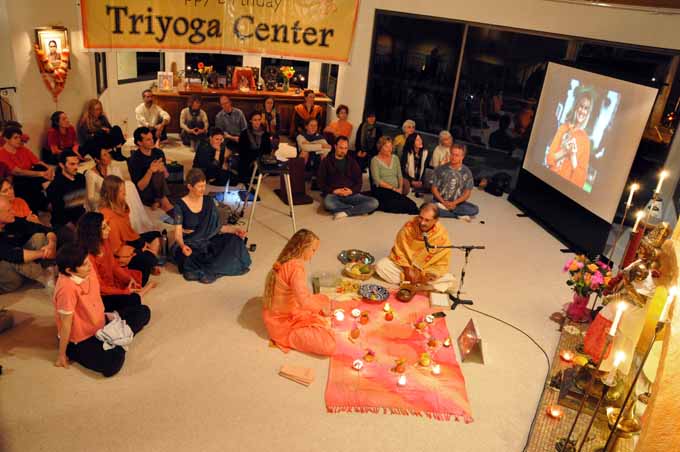 The Saturday evening satsanga began with Anagha Devi Puja. Ravi, Sri Swamiji’s devotee from southern CA, explained the meaning of this puja and invited Kaliji to perform it. Everybody enjoyed watching the beautiful ritual that was accompanied by a fabulous slide show of great photos from Kaliji’s recent trip to India. The photo were taken by Madan, who was beyond honored to share his artistic work for Kaliji with others. 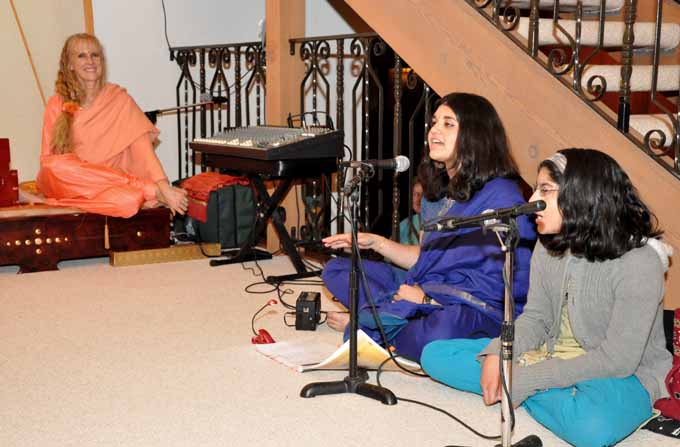 That was followed by a Carnatic vocal performance. Ravi’s daughter, Kavita, sang bhajans by Sri Swamiji. All love her voice so much and look so forward to her performance that it has already became a tradition for her to sing during Kriyavati celebrations. 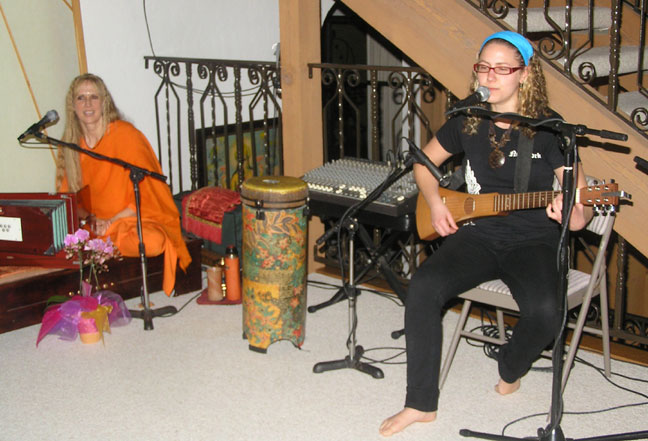 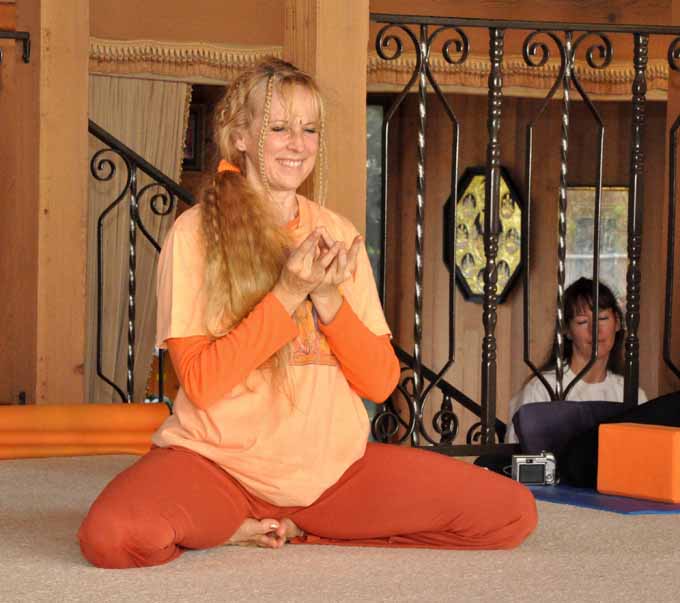 On Sunday, during a flow class, everybody witnessed Kaliji in Kriyavati. As always, it was awaited but happened unexpectedly. Someone asked Kaliji a question on the flows…. and the answer came in the from of Kriyavati. This experience leaves the room in a profound, almost resounding silence and tangible energy, with happy smiles on the faces of the flow-ers, hands in front of the heart, filled with gratitude and joy to be part of this magic.

“People think of the Upanishads as something very ancient, but TriYoga is living Upanishads and it will be considered as so later on, as thousands of years pass by”, said Don from Michigan.

Kamala from California, smiling broadly said “Kaliji always speaks about doing pranayama as going to the cosmic gas station. To me, coming here for the celebration and to be present for Kaliji’s Kriyavati, which we witnessed today, is like getting a very good fuel refill”.

Beth from PA, who had come to the Malibu ashrama for the first time, said that she had heard about the Kriyavati celebrations for a few years, and it was even better than she could have ever imagined.

Later, more thanks were sent to Kaliji:

Thank you for these 3+ magic days, full of love, energy, fun, beauty, knowledge, music and surprises; thank you for the expanding the FLOW. And I have never experienced before such a fantastic Devi Dance.

It was so blissful to be in Malibu with you this weekend – great yoga, fabulous weather, wonderful hikes and family time, good satsanga with the community, nutritious, delicious food – just wonderful on so many levels!

Thank you for everything this weekend. It was fabulous and rejuvenating!

What an incredible weekend!!! It is always like this… the most amazing, profound and life changing experiences You grace us with. I am so grateful. Every single moment with You is so special ~ experiences that transform. I feel sooo blessed…

It is always exactly what I need to move forward. You see so much in me. You inspire me so much.THANK YOU!!! THANK YOU SOOOOO MUCH…

There were also several new items released during the weekend ~ new TriYoga 30th Anniversary t-shirts, books inspired by Kaliji, CDs of jnana talks, and more. These items will will be available for purchase in the triyoga.com Online Store. 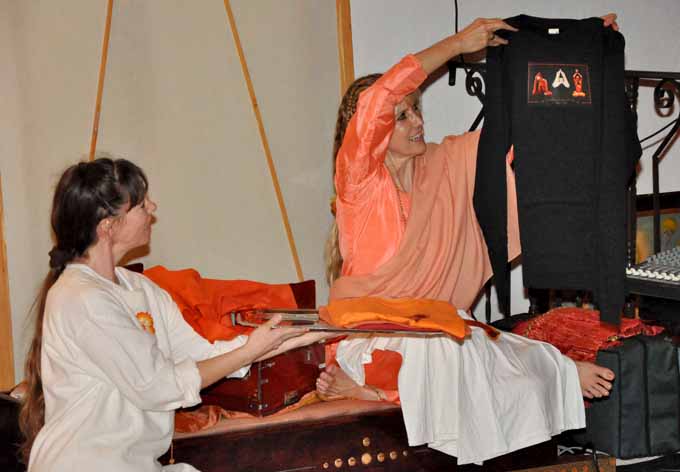 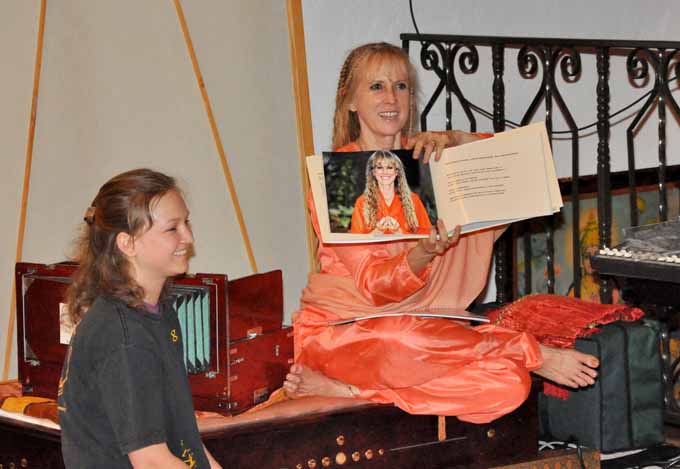 Book of Kaliji’s quotes, presented alongside beautiful photos of Kaliji 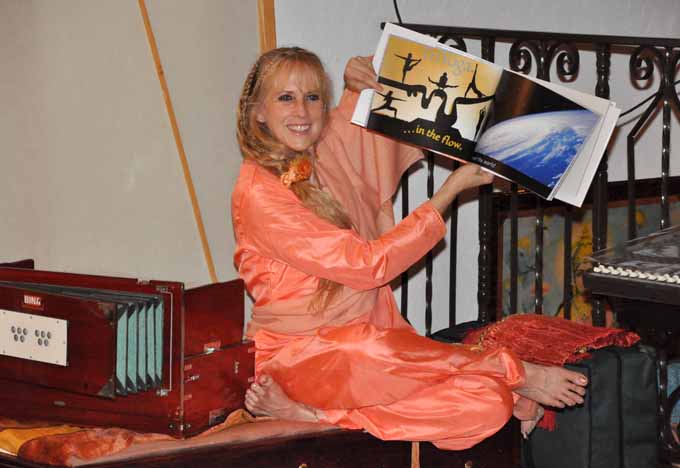 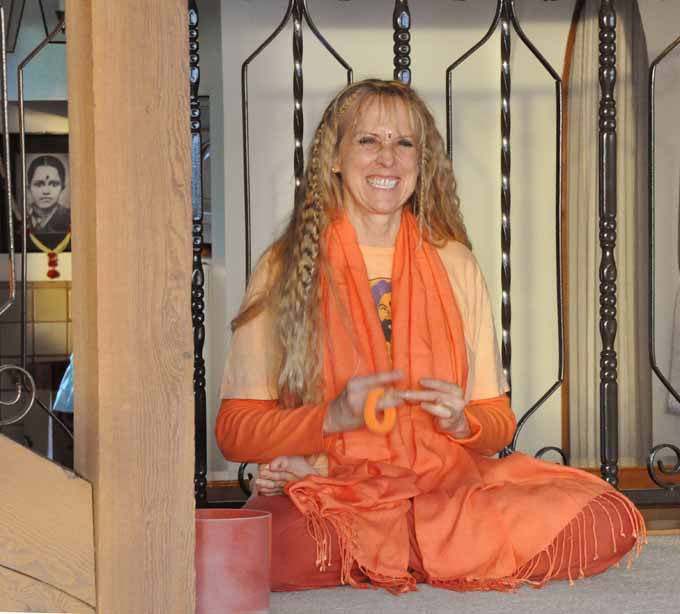