Neil Bernstein
Name
Neil Bernstein
TriYoga Certification
Basics–Level 1
Certification Date
February 28, 2016
Country
USA
State/Region
USA ~ Iowa
City
Cedar Rapids
Map
About
I don’t think a life’s path is often linear, and that conviction could not be more apparent than my path to TriYoga. While I have been active in the outdoors most of my life, I never was particularly athletically gifted, and, as one of my TriYoga friends put it, “Neil treats life as a full-contact sport.” As such, I accumulated a myriad of injuries that exacerbated bad skeletal genetics. So, the concept of yoga was far from my mind when I walked in the door of TriYoga of Cedar Rapids.
I developed an interest in Eastern philosophy in high school, and I continued that in college while pursuing various degrees in ecology and animal behavior. At the advice of one of my professors, I began studying martial arts. After many starts and stops as I moved to earn new academic degrees, I became interested in Chinese Wu Shu, especially Tai chi. One of my friends suggested that I try studying Tai chi under Sterling (Satyam) Hart, and that is why I came to TriYoga of Cedar Rapids. Quickly, I began to let go of what I knew to embrace the new, but my youthful, inflexible, and uncoordinated body had several decades of abuse on it by that time.
I was aware that the main thrust of the studio was yoga, but I was certain that I could never participate. Never-the-less, I brought my daughter to partner stretch workshops, and she had a lot of fun pulling and pushing on me. We began practicing some of the postures each morning before I would drop her off to elementary school.
At one point, Nancy (Narayani) Paris suggested that I come to a workshop offered by a visiting instructor. My mat was set up directly by the guest, and I remember the shock on her face when I did not know Cat posture or any other poses. However, I felt a great relaxation and expansiveness after the workshop, so I began attending Basics classes.
After a few years, I was helping new students set up for class on a morning where Basics and Level 2 classes were offered simultaneously. Fate works in strange ways, and new student after new student walked through the door. I have not seen it happen again since. The result was that I gave up my space in Basics and walked over to the Level 2 class. I saw the same shocked face again, this time from Satyam, but he encouraged me to stay in Level 2.
For the first few months, Level 2 was very hard, and I kept muscling my way through Kriyas and wondering when the Asanas would end. However, I also started attending workshops for the interns working on Level 1 and Level 2 certifications, and I began to learn more about moving with my breath and relaxation. Tai chi came to yoga!
Now I could understand more about Basics. Without going into details, Narayani suggested that I enter the internship for a Basics instructor, and after many months of contemplation, I started. Although I had taught college for over 25 years at the time, this was frustrating. However, Narayani and Satyam did not give up on me, even when I was ready to give up on myself. I began “student teaching” with Narayani, and after each class I got feedback.
I still have a lot to learn. Some poses are still very challenging, but I can relax into Kriyas and Asanas that I once thought were out of reach. Each day, I find new energy paths, and I love it when I finish a class and the students tell me that they feel relaxed.
My college students often ask what my goals are and how I got to my present. I don’t have a good answer for either because both are based on so many contingencies. At the moment, I am working on slowing down my Kriyas and becoming more aware of energy flow. That sounds good for the time being. 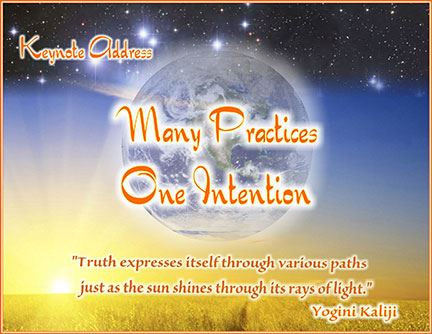