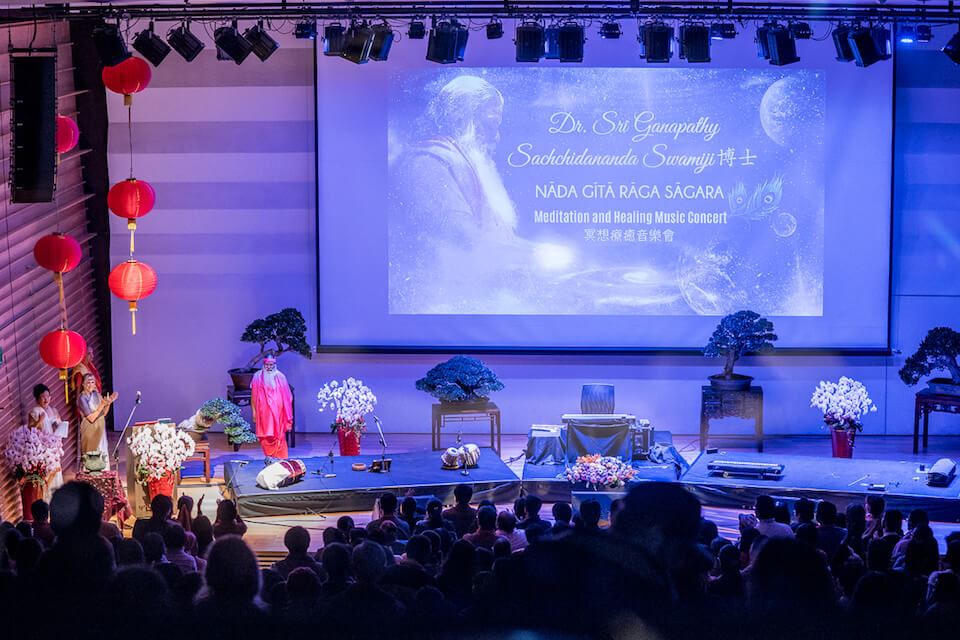 Sri Swamiji and the Celestial Message Troupe traveled to Taipei, Taiwan from December 28–January 4 for the first Music for Meditation and Healing Concert in Taiwan, held on New Year’s Eve at the Eslite Performance Hall. This year marks the 30th anniversary of Sri Swamiji performing Meditation and Healing Concerts. The concert and sightseeing program for Sri Swamiji and attendees were organized by Yogini Kaliji and the TriYoga Team.

Kaliji and the TY team from USA arrived in Taipei a few days prior to Sri Swamiji, and were greeted by a large and enthusiastic group of Taiwan TriYoga teachers, students and family members. 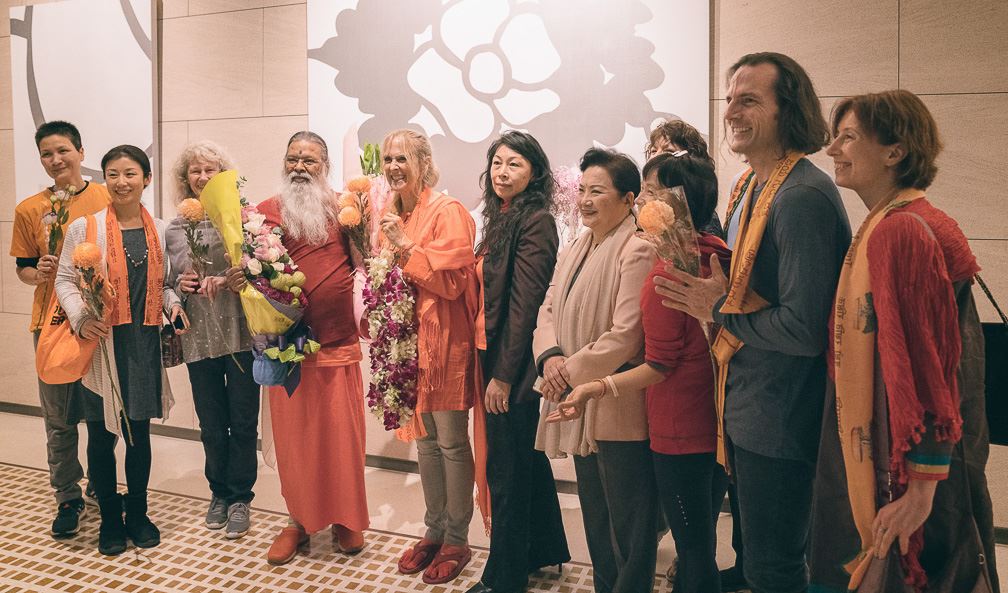 Sri Swamiji was greeted by Kaliji upon arrival at the Taoyuan Airport VIP Terminal, and by a welcoming party at the Eslite Hotel.

On New Year’s Eve, Sri Swamiji performed the Music for Meditation and Healing Concert “Nada Gita Raga Sagara” to a sold-out audience with Kaliji as emcee. The concert was streamed live worldwide. The stage design featured rare bonsai, amazing orchids and antiques arranged by Mr. Tsai, past president of the Bonsai Association of Taipei, and Ms. Lin, president of the Taipei Antiques Association. They were assisted greatly by Bonsai Master Chen from Wang Jing Yi Yuan Bonsai Garden.

The New Year’s Eve fireworks display at the Taipei 101 building is a world-famous tourist attraction. The view of the fireworks from the Eslite Hotel was fantastic.

Sri Swamiji visited the TriYoga Family Day program, delivering a talk and generously having pictures taken with the happy attendees.

Kaliji taught two programs during TY Family Day—the room was filled with TriYoga flow-ers who were eager for the opportunity to flow with Kaliji.

At 6am on New Year’s Day, the TY Family Day group gathered outside for a three-hour Sun Salutation. Eva-Maria joined and led the class. 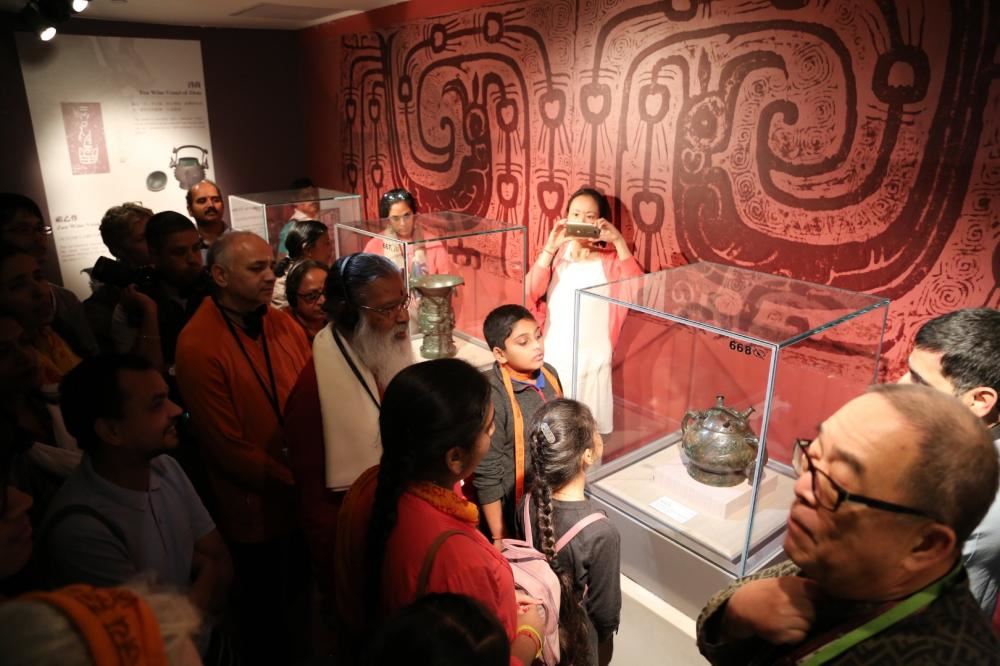 Sri Swamiji and attendees enjoyed daily sightseeing. On December 30, Sri Swamiji visited the National Palace Museum in Taipei, which houses the world’s largest collection of Chinese art and spans China’s nearly 5,000-year history. Most of the museum’s over 600,000 art objects were part of the Chinese imperial collection, which began over 1,000 years ago in the early Song dynasty.

Yangmingshan National Park, just north of Taipei, was a special highlight on January 2. It is famous for its natural beauty and volcanic activity. Sri Swamiji also enjoyed a secluded and serene mountain waterfall.

Sri Swamiji visited Bai Win Antiques in Taipei. While driving from Yangmingshan National Park back to Taipei, Sri Swamiji suddenly asked the driver to stop at this shop. The shop owner was very taken with Sri Swamiji and expressed that she was a devotee of Ganesha! She gave Sri Swamiji a gift from her own altar: a crystal with an image of Ganesha. The owner also cares for 30 dogs in need of rehabilitation, and invited Sri Swamiji to perform a concert at a major animal welfare conference she was organizing in Taipei.

Sri Swamiji and Kaliji were both interviewed by the Taiwan publication “Amazing Magazine”. This monthly magazine has been in publication for over 10 years, and “focuses on the balance between body, mind, and soul”. It is owned by a famous singer in Taiwan, Pei-Hsia Lai.

Kaliji with musicians from the Celestial Message Troupe. 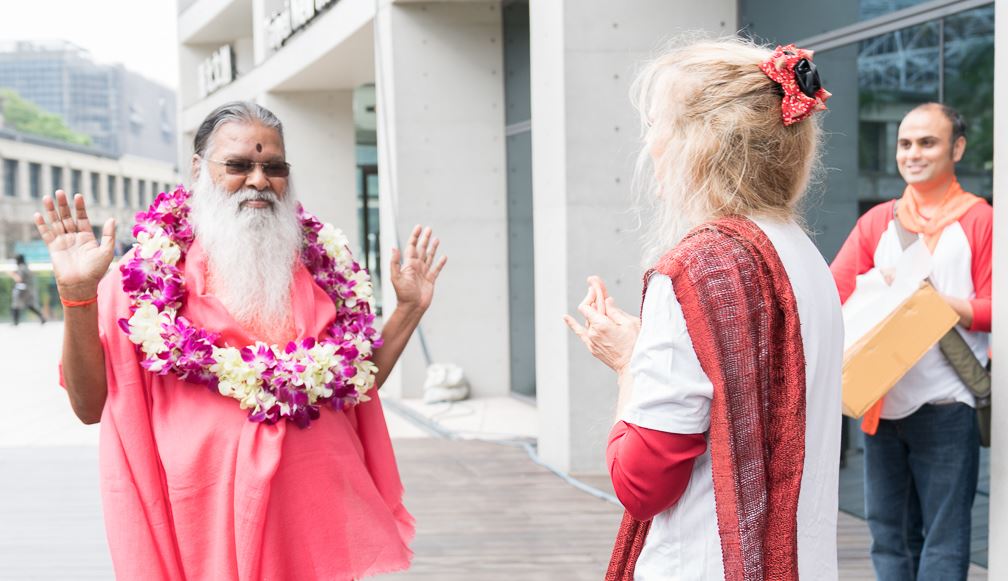 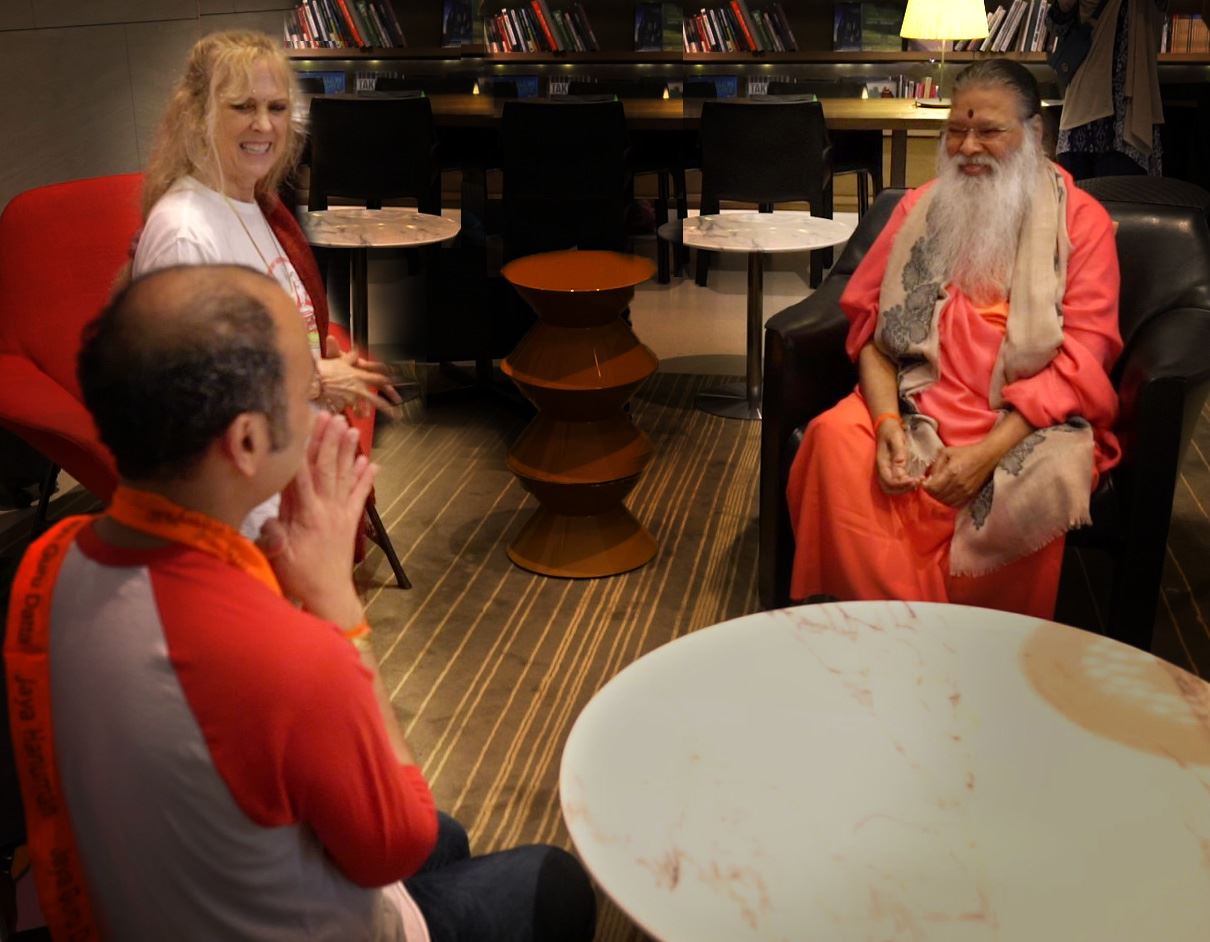 Sri Swamiji departed Taiwan on January 4, and was given a send-off by Kaliji, the TY team and a group of Taiwan teachers.

January 4 was TriYoga’s 38th Vedic (moon) anniversary. Kaliji celebrated at TYC Taoyuan with a talk, a meal and many photos!

Julia is director of TYC Taoyuan and a member of the teacher training staff. She was an instrumental team member during the seven day event. 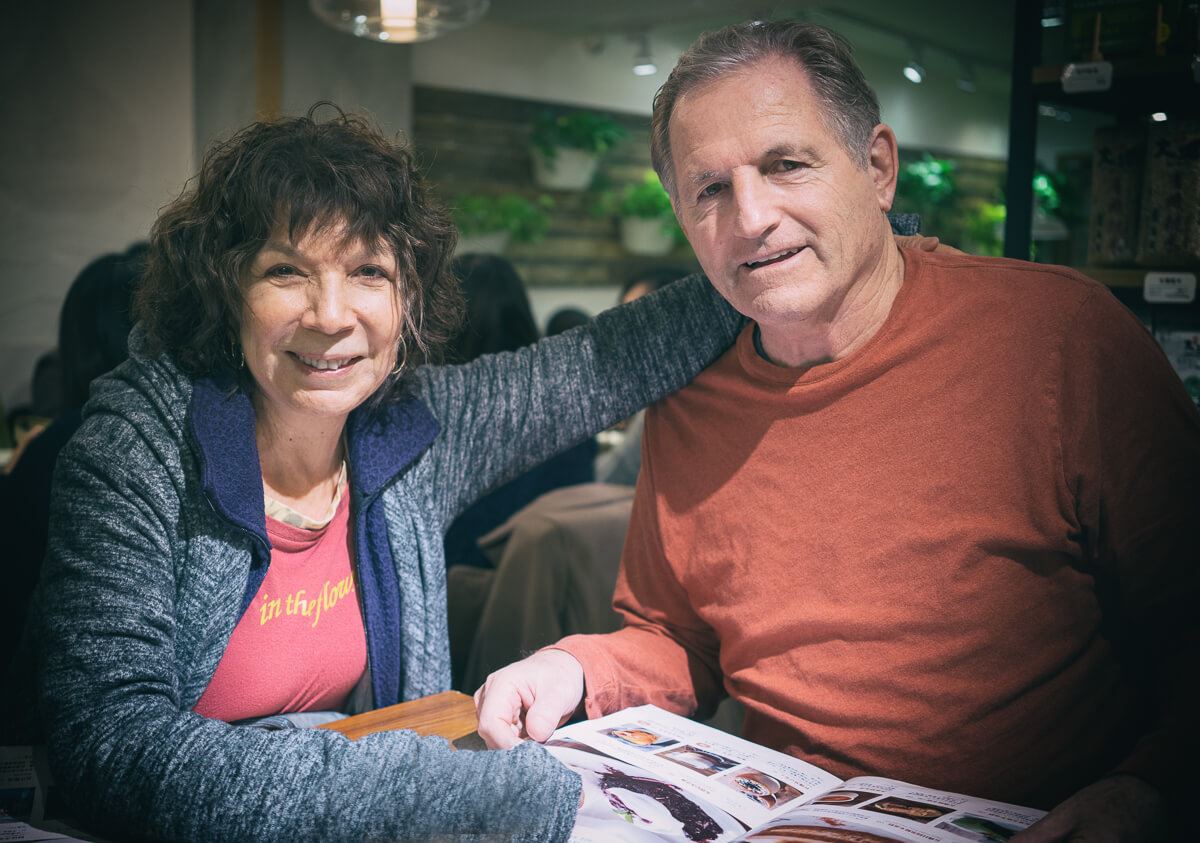 Kaliji and the TY team departed Taiwan on January 5, TriYoga’s 38th (sun) anniversary, to travel to Shenzhen, China for a weekend of celebration programs.