The special day of Sankranthi was followed by another auspicious day – the solar eclipse on January 15th. According to vedic astrology, a solar eclipse has a powerful influence on the mind. It can work in both negative and positive ways. It is said that if one does sadhana (spiritual practice) and austerities on this day, it ensures multiplied benefits on the spiritual journey. 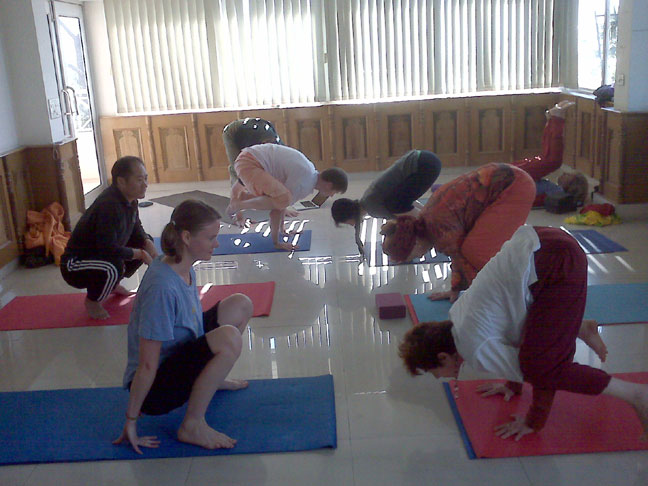 The TriYogis began this day with a long flow practice. A sunlit room with a view over the Himalayas and the Ganga was the perfect place for the practice. 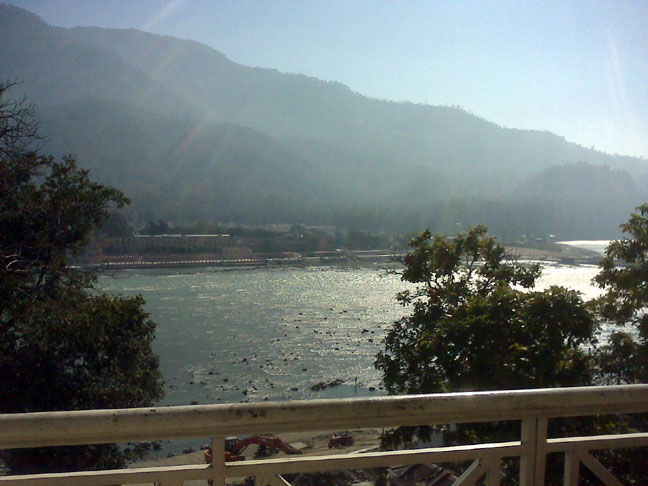 View from the yoga room

It is considered very special to bathe in the Ganga waters on the Solar Eclipse.
There were thousands, if not millions, of people willing to “wash away their sins” in the city of Haridwar. January 15th was the first day of the Kumbha Mela. It is the largest spiritual gathering in the world, taking place once in 12 years in one of a few cities, including Haridwar. 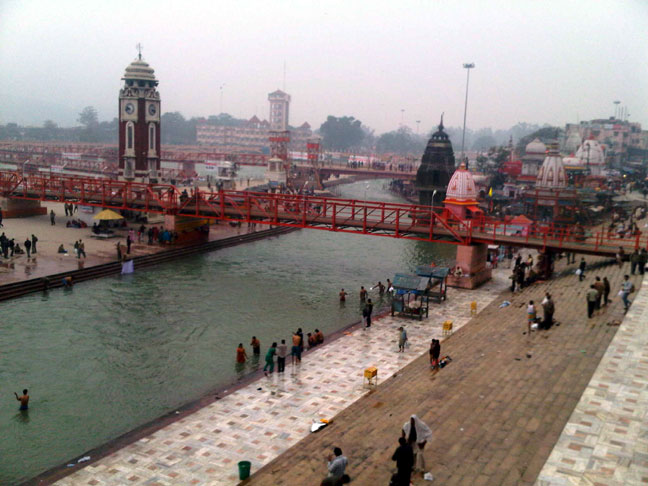 Haridwar, where the Kumbha Mela is taking place

Driving through the main part of the city was like watching a movie, a great show. All were very happy to witness it. None of those with Kaliji had ever seen anything like that before. The moving crowd looked like one continuously flowing river that was getting larger and larger and “flooded” the whole city. 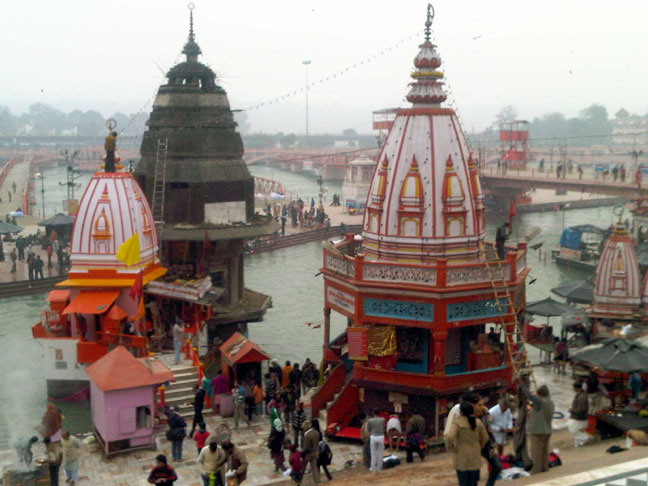 The TriYogis had very much fun and none had a desire to find themselves in the middle of a million people. The car window was the perfect observation point. Yet, all were eager to take another auspicious bath in the river Ganga. Kaliji took the group to Sri Swamiji’s ashrama in Haridwar, called Bhadra Kaali Peetham. Every other year, this ashrama’s ghats (banks) of the Ganga offered a secluded, almost private, place for going into the water. Not this time. The ghats were full of people. As soon as the eclipse was over, all of them were in the water.
So the group was lucky to experience the great show of Kumbha Mela firsthand.

With Kaliji, there is always a magic of the flow. As soon as it was time to take the bath, the crowd literally disappeared. Once again, austerities with Kaliji were fun, yet filled with deep spiritual feeling and inner transformations. Later, Sunshine from China said that it was one of the events he would remember for the rest of his life. He feels that it was the beginning of a new life. His words expressed the feeling of many. 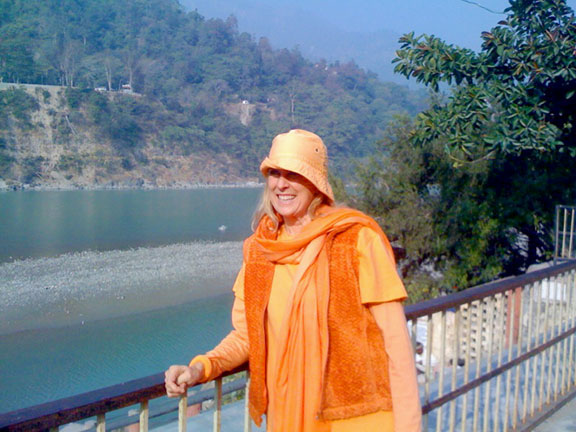 The next day, all enjoyed walking around the heart of Haridwar and its famous shopping area. To shop in India is very fun. Just to look at the stores, at all the colors, varieties of items, their shapes, at people and their ways of bring is such a joy. 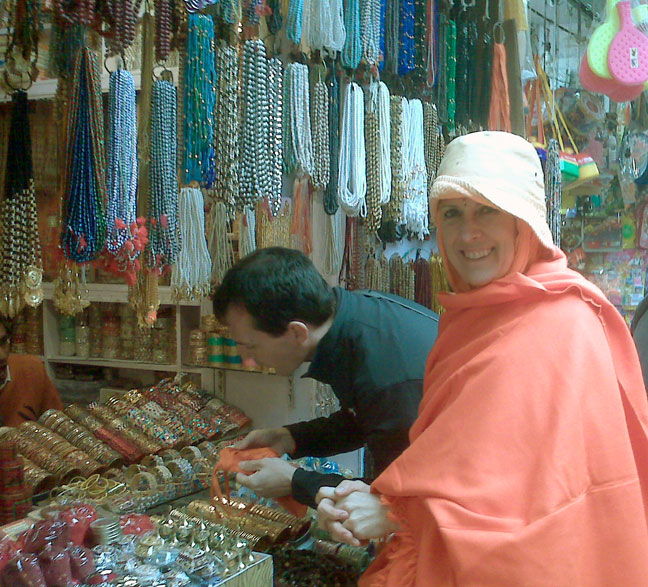 And Kaliji is great at shopping. In no time, she finds the best item for each person, whether it is a book, deity, bells, jewelry or clothes. It is amazing to partake from this shopping flow and see all happy with their purchases. 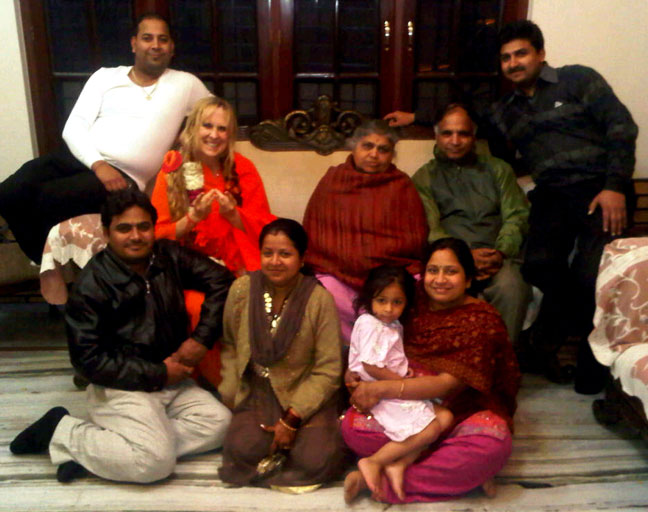 Later that evening, the group had the honor to accompany Kaliji for dinner at the house of Krishna, who owns jewelry stores in the area. He and his family met Kaliji a few years ago and immediately felt her energy. During dinner, which was the most delicious Indian food, he said that Kaliji is all about making others happy, she always comes from the heart and he can feel it. His father, with a big smile on his face, joined this heartfelt conversation: “She is Ganga. For us, Indian people, Ganga is the most purifying, so is Kaliji, and she is also the purest. Besides, she is like a mother who constantly attends to the needs of her numerous children all over the planet.”

And speaking of the Kumbha Mela, Krishna and his brothers took two baths on that day, one at 4am and another at 4pm, making a total of 51 dips!

On the last day in Rishikesh, after a 2.5 hour TriYoga class, the flow continued in the streets of the city and its famous Sadhu lane, with great views over the Ganga.

When the group stopped for the final group photo, Monica (from Berlin, Germany) who had joined the TriYoga group for the first time on this tour, gave a thankful speech to Kaliji and all in the group. 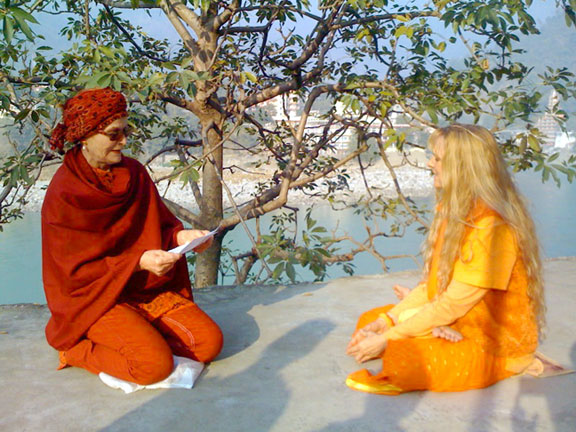 Among other things she said “Kaliji is a Being from Heaven. She has the divine capacity to transform, and everybody here is a bright example of this. Everybody has a life-changing experience with TriYoga! Kaliji is like the sun, that keeps everybody happy, patient and makes the group like a family. I have never met such a friendly, united group. Even though I am new here, I never felt like an outsider. I felt embraced with love by everybody from the very first moment. Thank you all. Thank you, my dear Kaliji.”
All were deeply touched and grateful to Monica for sharing her feelings in such beautiful words. 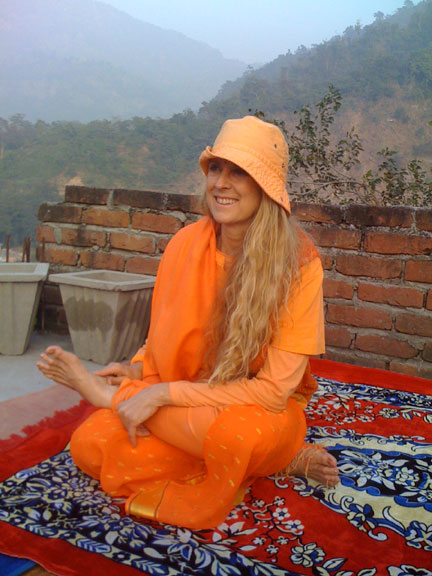 For the last sunset in the Himalayas, Kaliji and TriYogis met on the roof of BC’s house, enjoying an extraordinary view over the Ganga and having a a variety of delicious vegan desserts. 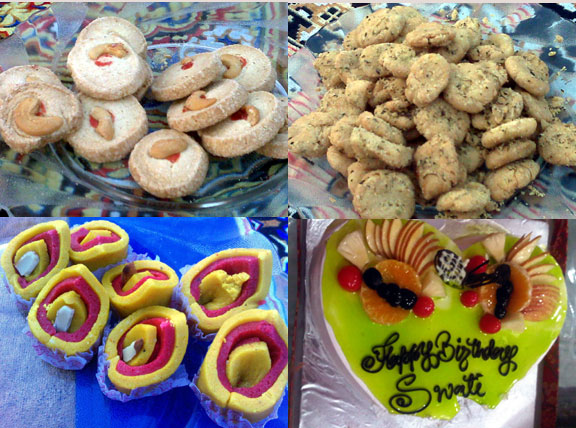 Vegan desserts prepared for Kaliji and TriYogis. At bottom right is a birthday cake from one of the dinners they attended. 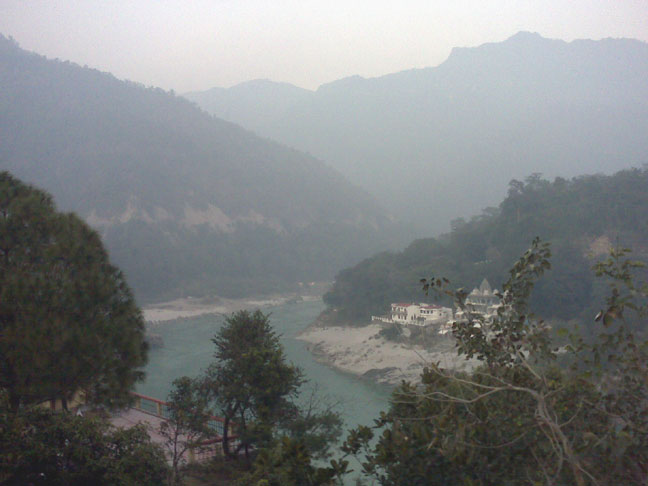 View from the roof

It was a treat to meet BC’s family, his wife Meenakshi and 6 children. 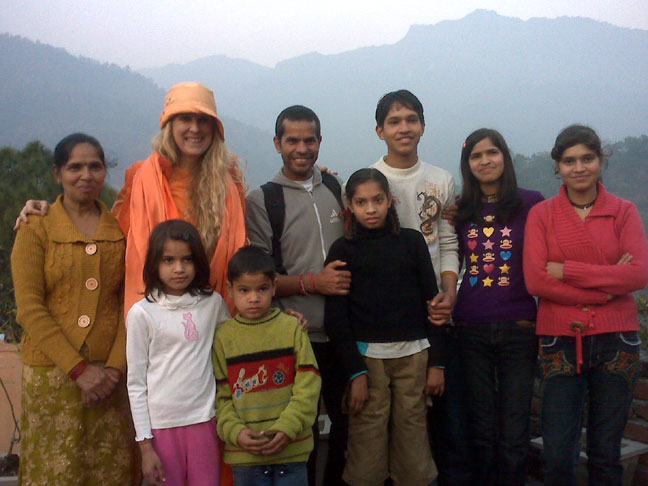 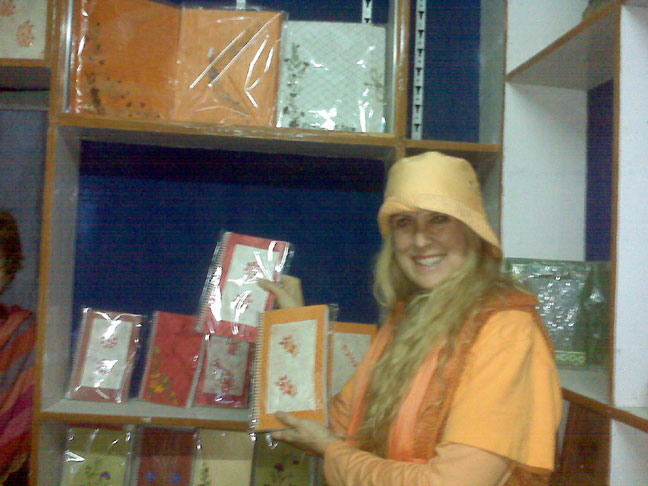 Beautiful recycled-paper journals made by Meenakshi

When packing for an early morning departure, everyone in the group could not believe that the tour was over. For all, it was an extraordinary journey, both internally and externally. Each felt like a completely new person. Sudevi from Santa Cruz said “I never thought that I could be that joyful, peaceful and happy, all at the same time. I never thought that my heart can be that open like here, in India with Kaliji!” 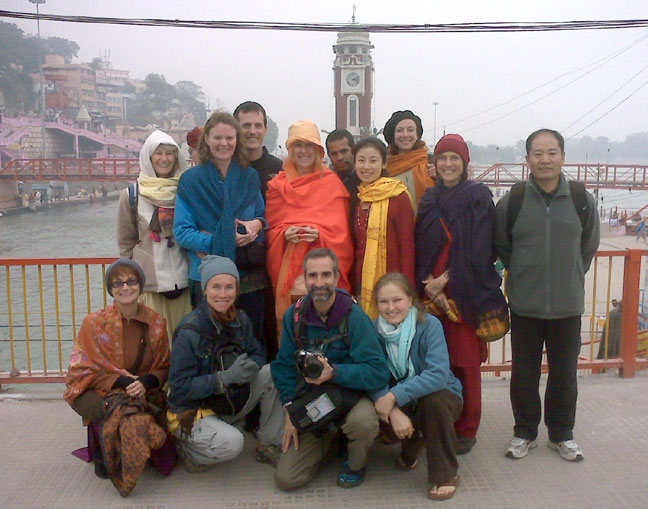 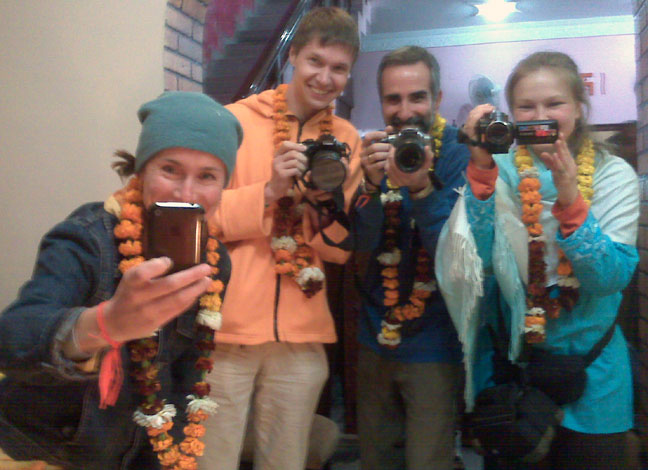 Throughout the tour, photos and videos were taken by Katya, Maxim, Madan and Ganga. 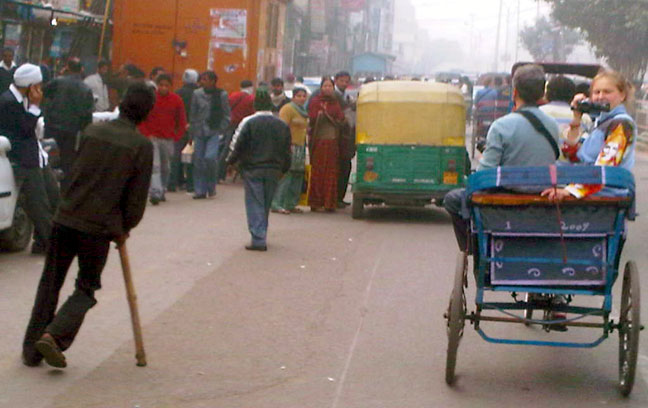 Ganga, always with camera in hand to tape for the KRIYA site, and Madan facing forward with camera, waiting for next life scene to capture.