On January 11th, the TriYoga Yatra continued in North India, in the sacred cities located at the foot of the Himalayas and along the banks of the river Ganga. 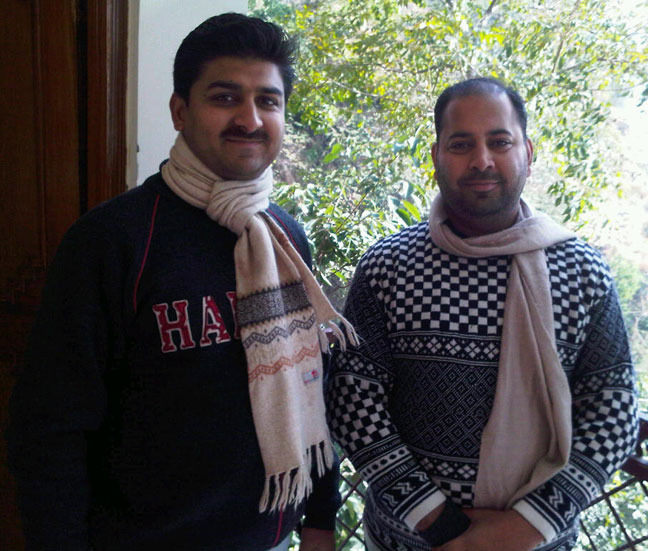 Brothers Deepak and Krishna went to greet Kaliji near the Ganga. They sell fine jewelery and handicrafts in Rishikesh ~ see their website. 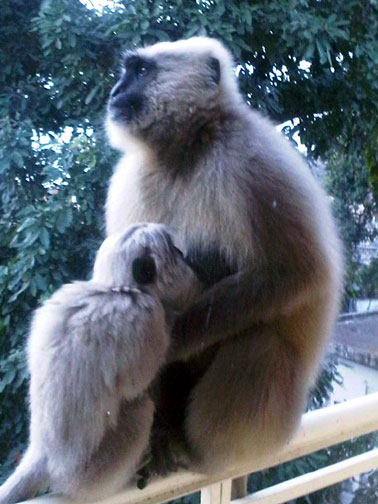 In the morning, outside Kaliji’s window in Rishikesh, came monkeys ~ they visited, groomed each other, and viewed the Ganges.

After one night in Rishikesh, Kaliji and the group went for a 2-day trip higher up in the mountains. The first destination was Rudraprayag, at an altitude of 600 meters. A 5-hour drive is nothing but pure joy when it takes place in the Himalayas. 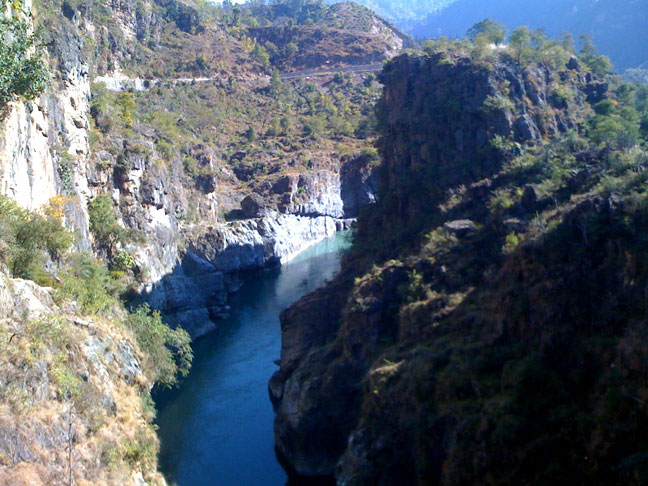 Winding roads, panoramic views of the steep mountains and the most beautiful, glacier-colored river Ganga. The views and colors continuously changed, depending on the time of the day and altitude. All were breathtaking and permeated with peace. Kaliji also reminded all that so many famous yogis, like Shankaracharya, were walking these very roads and doing tapas (austeries) here. Her comment contributed to the expanding feeling of reverence for this place. 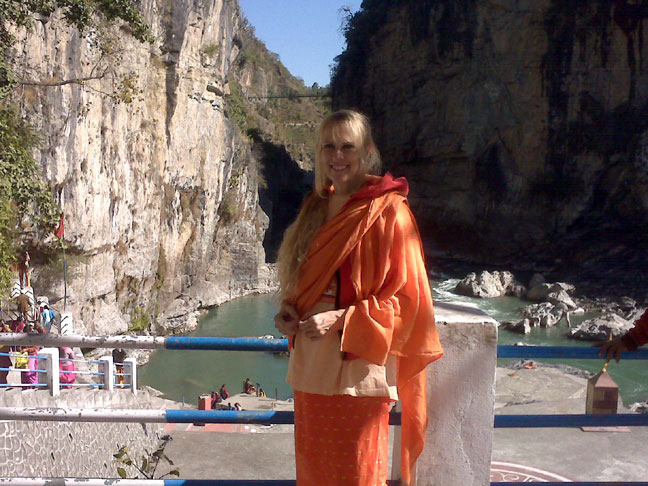 Upon arrival to Rudraprayag, all enjoyed a TriYoga class, which was a perfect conclusion for the day – to internalize the beauty witnessed during the day.

The next morning, BC, the organizer of the trip, came to the hotel very excitedly. “It is snowing in the mountains!”, he said. All smiled back, but none could really understand what he was so excited about. Besides, it was rainy, cloudy and cold outside. Kaliji always sees the best in each situation. Walking out into the rain, she smiled and to think of the rain as another form to receive Ganga’s blessings, since they were not going to take a dip in the river itself on that day.

Within a 3-hour drive of more breathtaking views, the jeeps reached an altitude of 2700 meters (over 7700 feet). “Wow! That is unbelievable. So beautiful”, one could hear these words coming out of every car. Yes, it was snowing in the mountains, in the place called Chopta, that is often referred to as Switzerland of the Himalayas. Now all understood what BC was so excited about. It felt as if the group drove into a fairy tale! The higher the jeeps went, the thicker the snowfall was, leaving the winding road and the trees white. Everything around felt so still and present. Kaliji smiled saying that now all got the blessings of Ganga in the form of snow. 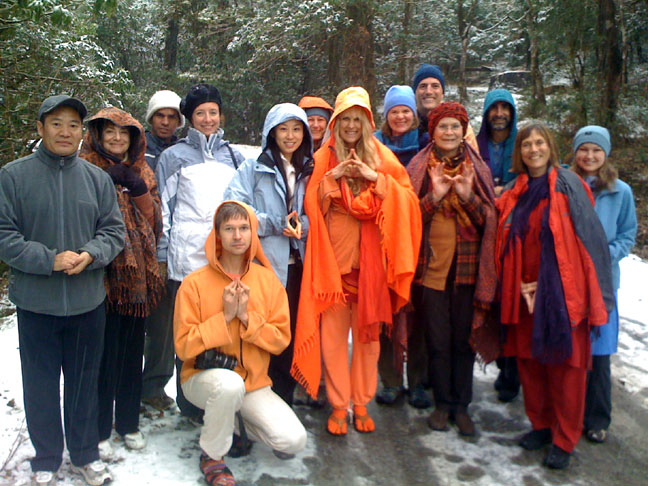 Snowcaps were hidden in the fog and clouds, which, in a way, made those spectacular views even more mysterious and magical. From time to time a snowcap would reveal itself, allowing all to catch a glimpse of its majestic beauty. “When it is clear, it looks like heaven!”, said BC. All got out of the cars to take photos. Playful Kaliji threw a couple of snowballs, which made picture time so much fun. 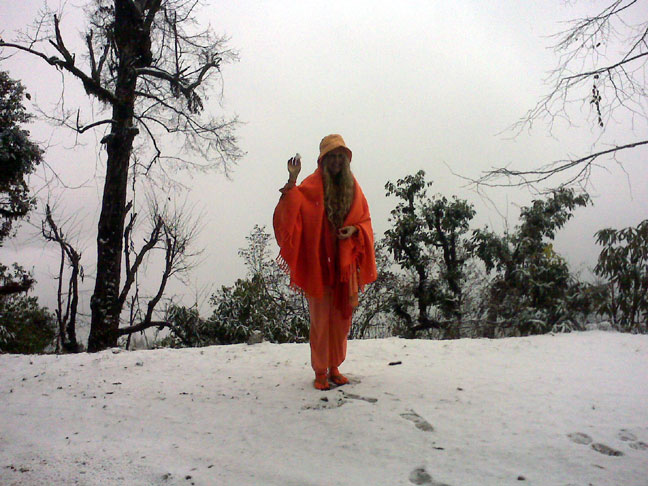 After the snow and cold, a traditional Indian lunch (vegan) of delicious aloo parathas, dal and vegetables warmed everybody up for the next adventure – a visit to an ancient temple in Ukhimath. 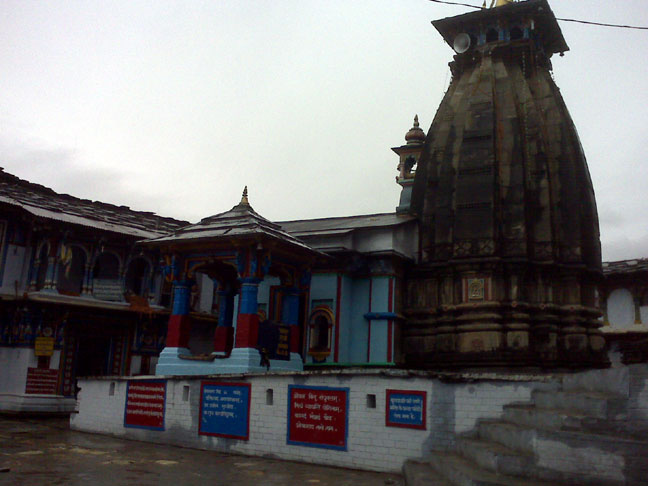 This 11th century temple serves as a winter abode for Lord Shiva. Usually, He (Lord Shiva) resides in Kedarnath. This place is so high up in the mountains, that winter snow makes it difficult for people to get there. That’s why each year a special procession is arrange to bring Shivalingam (Shiva’s symbol) to Ukhimath, so that all can still get Shiva’s blessings.

Full of excitement, covered up in shawls, hats, and gloves, the TriYogis were waiting for the priest to open the temple doors. Their excitement quickly gave into hesitation, when the priest asked them to leave their shoes in the little construction a few feet away from the temple. That meant to walk barefoot through puddles, on the coldest stone pavement and floor. While all were still deciding, radiant Kaliji was already barefoot and in the temple. Her example is always catching, all immediately regained their excitement and followed in. No need to say that the special place was worth the austerity.

More joyful austerities followed on the next day, which was the holiday of Sankranthi, the first day of spring, according to the Indian calendar. It is considered very auspicious to take a dip in the holy waters of the Ganga on this day.

From the hotel the group walked to Rudraprayag, the origin of Alaknanda, one of the 3 rivers forming the Ganga. The path stretched through steep mountains with huge, edgy rocks. 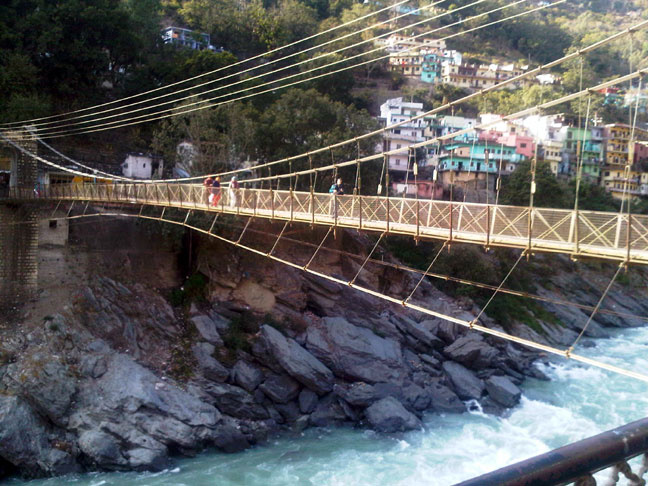 To cross the river all had to go across a long rope bridge. The height of this bridge was breathtaking. It took some courage and trust to walk it, especially after BC said “Only two people at a time can cross it”. Of course, once on this bridge, one could enjoy the stunning view over Rudraprayag.

The coldest water of Rudraprayag did not stop the TriYogis from taking the holy dip. One after another they went into the river, getting wet up to the top of the head, laughing and trembling from cold and providing great entertainment for Kaliji.

The next place for austerity was Devaprayag, the origin of the Ganga. Once again, all TriYogis went for the tapas. Fortunately, there was a little stone cave that served as a dressing room. Soon there was a line of shivering, soaking wet and utterly excited TriYogis. 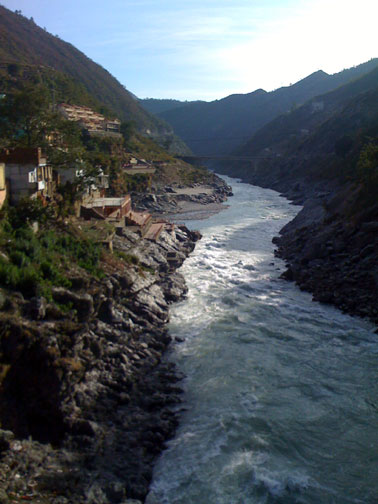 On the way back to Rishikesh all were sharing their feelings and thoughts. Everybody felt so fortunate to come to these places with Kaliji. None of this experience would have been the same without her guidance, explanation, lightness and…humor.