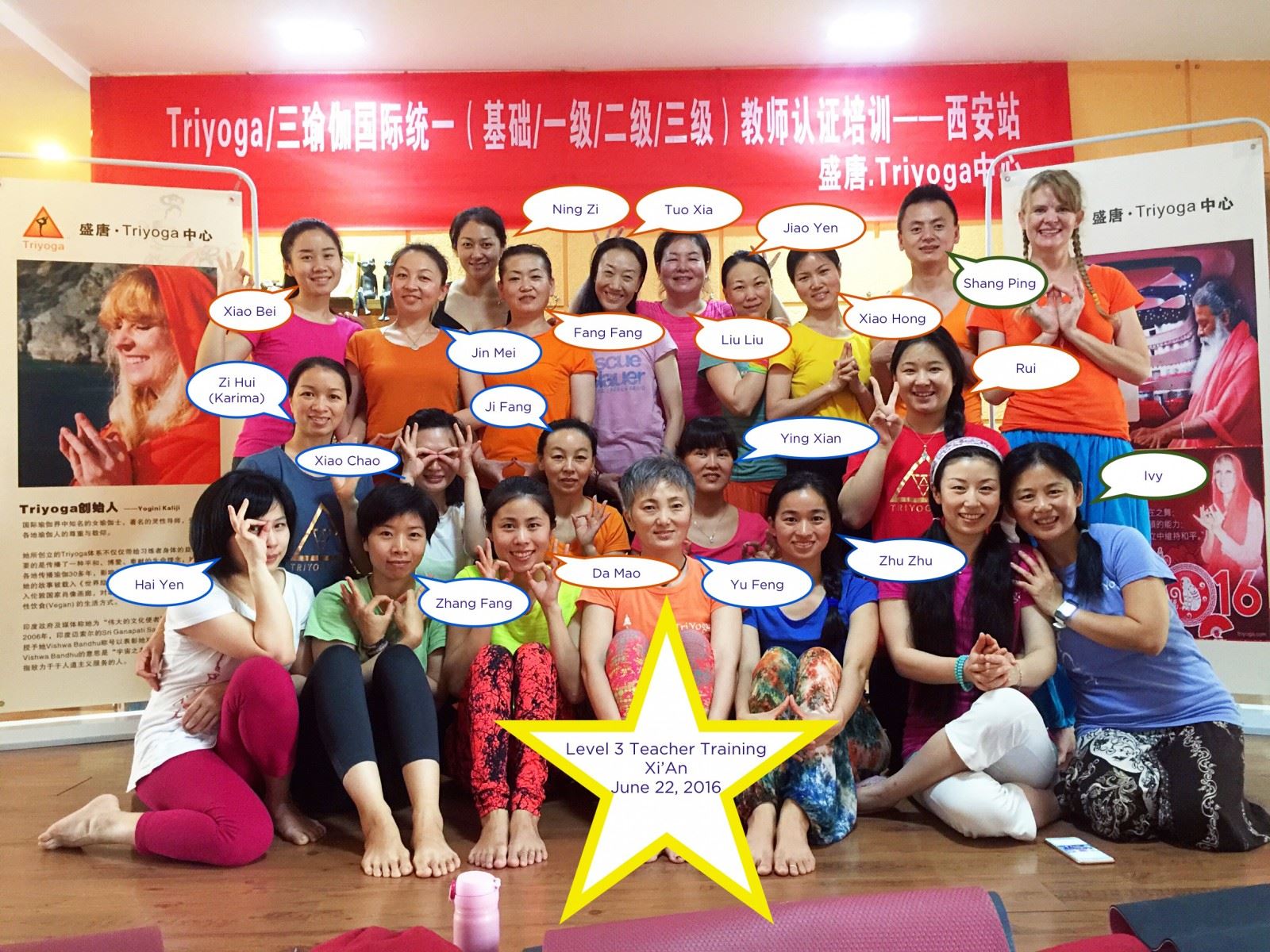 Congratulations to the new Level 3 teachers in China! The second full Level 3 Teacher Training completed June 22 in Xi’An China with Santoshi. Junior-Level teacher Kiki was translator and assistant, and Tuo Xia (from Langzhou in the far west of China) also joined as an assistant and teacher training intern. Teachers from throughout the country came together to experience the Fire flows– and to deepen their understanding and experience of the systematic approach that is unique to TriYoga. 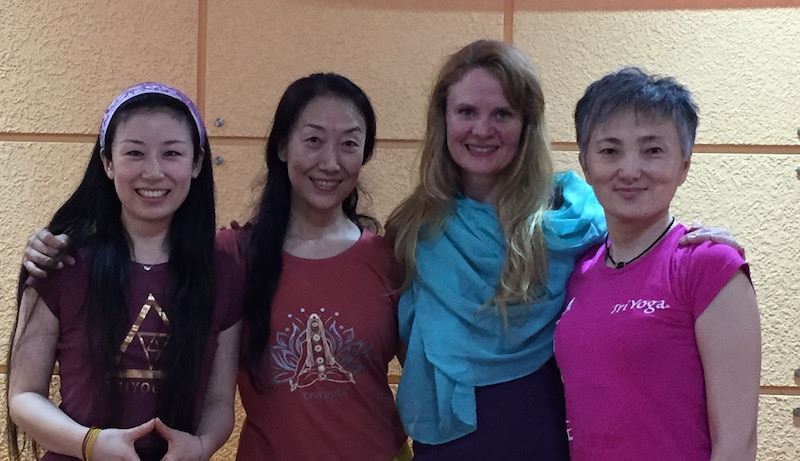 Daily the students commented on their increasing strength and flexibility, and marveled at the genius that is TriYoga Flows. The group, which included teachers who had done their Basics – L2 trainings with a wide variety of teachers–Chandra, Eva-Maria, Kiki, Ma Mei, Rishi and Santoshi–enjoyed sharing their experiences and expertise with each other. Almost daily someone in the group brought a present for everyone: ranging from yoga props to headbands to tea bottles and cell phone cases. They also shared with each other tips for promoting TriYoga in their areas (including Shenzhen, Shanghai, JiYuan, XianYiang, and JiaoZuo).

During the training, Santoshi also had the opportunity to offer an introduction to Anatomy in the Flow, which was attended by several of the Level 3 interns, as well as teachers from previous trainings and Kiki’s parents! Kiki’s mother, Wu Ai Guang, was a medical doctor specializing in obstetrics and gynecology, and said that the workshop was “clear and lively” and she said she even learned more about her own knee pain. Her father, Xue Ming Liang, was so excited by the workshop and even leapt up a few times to point to different parts of the models and diagrams– he said he had spinal surgery in his 30s but never truly understood what they had done until taking this class! Wu Ai Guang has also attended TriYoga workshops, and even went to several days of the Basics Teacher Training earlier this year and joined the WeChat (Chinese social media site) chat group for the Xi’An TriYoga teachers, so she can keep up with all the news! 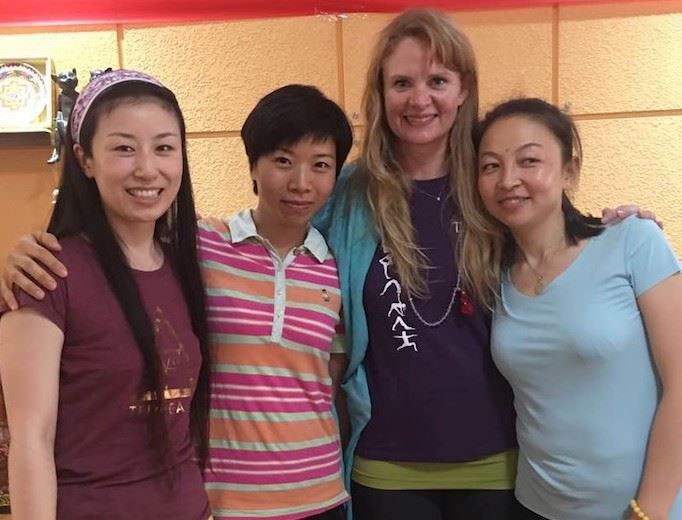 Two teachers attended the entire Basics through Level 3 teacher training in Xi’An this year.
Zhang Feng and Jin Mei began Basics on the new moon that marks the end of Chinese New Year, and completed Level 3 the day after the full moon and Summer Solstice.

The training also coincided with the Chinese Dragon Boat Festival Day, a holiday which is celebrated with a special treat, Zhong Zi, triangular sticky rice balls. TYC Director  Yu Feng arranged a program at a local vegetarian restaurant and culture center which included a recitation of a famous Chinese poem, a tea ceremony, a Kung Fu demonstration, chanting with TY Teachers Da Mao on harmonium and Xiao Chao on drum, and the chance to make Zhong Zi!

Santoshi also visited Xi’An’s second TriYoga Center, TYC “Flower Field” which was opened earlier this year by TY Teacher Er Jun. Santoshi and Kiki offered a demonstration for new students to see TriYoga Flows, and the group joined together for chanting and testimonials. One of the most touching testimonials was from Er Jun herself, whose husband had not initially been supportive of her yoga studies– but, having seen the changes in her, now not only supports it but let her transform their investment apartment into a TriYoga Center!

Some of the group also took the chance to visit the Terra Cotta Warriors that are outside of Xi’An.

In 1974 a farmer was digging a well, and found the head of one of these warriors— a brightly painted clay head. Within 30 minutes the paint had all faded off, but still he thought it was a big discovery and reported it to the government. It seems other farmers in the area knew that there was pottery buried beneath, but had never thought to report it as it seemed it was only pottery and nothing valuable. The government decided to excavate and made this very exciting discovery– More than 8000 statues of soldiers, each different and unique in height, weight, facial expression and role.  The pits were made of specially fired bricks that were anti-microbial so germs couldn’t get inside, and they are all lined up according to precise battle plans— there’s even a “command center” where there are generals and guards.
The base and legs are solid, but the bodies and heads are hollow—  so the warriors balance themselves! The TriYoga group decided this was just like the yoga asana of warrior– where the legs are strong but the body relaxes and floats above.

The last days of the training included a Skype meeting with Kaliji, who also introduced the “Princess” Sara Devi. Many of the teachers had met Kaliji, either in China (in Shenzhen or at the Dalian or Hong Kong Yoga Conferences) or in India (eight of the participants joined last years Journey to India with Yogini Kaliji), and all commented that each time they see Kaliji, in person or online, she looks younger and more beautiful. They said this was the best promotion for TriYoga, only to look at Kaliji!

The training concluded with a group meal– and instead of going to one of the nearby vegetarian restaurants, they all decided to cook together! A delicious meal of vegan dumplings, fresh vegetables, tea and fruits prepared and shared by all!