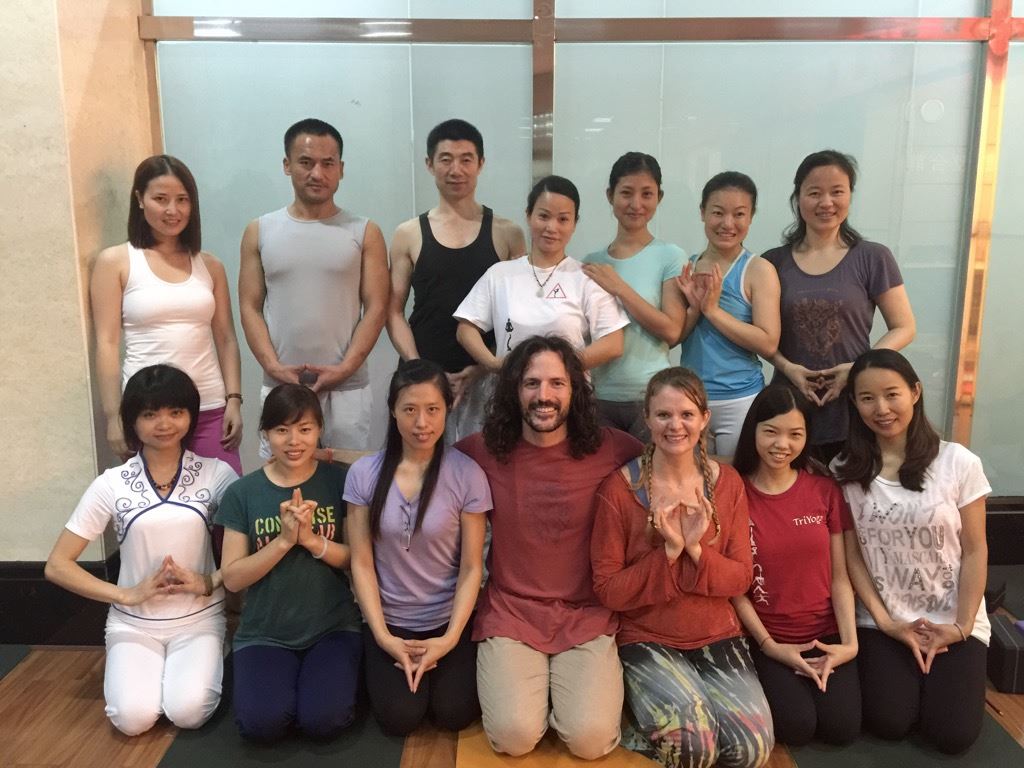 All of the training group showed great determination, dedication, and enthusiasm throughout the training. Congratulations to TriYoga’s new Level 2 teachers!

Teaching Chinese students is fun for many reasons! One is the level of flexibility demonstrated by most Chinese training groups. In an average western training, there may be one student in a group that is completely open in various hip-opening postures. In the Extended Pyramid photo above, six of the twelve students are released completely to the floor—including both men!

Students refine their teaching skills during teaching methodology and practicum.

A happy highlight of the training was Skype with Yogini Kaliji!

The TriYoga Center hosted movie night, and provided a wonderful vegan meal for all of the teacher training group and the studio members. The movie shown (with Chinese subtitles) was “Cowspiracy”, a fascinating and thought-provoking documentary about the benefits of plant-based diet (and repercussions from an animal-based diet) for human health, planet ecology, and animal welfare.

Zhang Li, a Level 2 TriYoga teacher living in Shenzhen and Ottawa, Canada, provided expert translation for the training and also helped as teaching assistant with technique, teaching methodology and practicum.

Kai Yun (left) and Ke Min (right) are examples of the determination and dedication that typify most Chinese students. The Bao’an District of Shenzhen is on the far west end of the city, while they both live far to the east of the city. On average, their commutes each day were two hours EACH WAY to and from the six-hour training. There was one day of torrential rain which caused extensive flooding in Shenzhen, and it took Kai Yun a full eight hours to return home. Nevertheless, neither Kai Yun nor Ke Min missed a day of the training or were ever late.