The 10-Day Level 1 teacher training led by Nandi and Tarini took place from March 18 through 27 at TriYoga Center Santa Cruz. Thirteen interns and teachers participated, including
four who attended the entire 10 days.

Participants were Latika from Portland, OR, Ida and Daniel from Sweden, Kari from Sebastopol, Carolyn from San Francisco (soon moving to near Phoenix), Susan, Lotus and Chris from the Santa Cruz area; Cynthia from San Francisco, Pam and Stina from Berkeley, Kamala from Davis, and Johanna from near Munich, Germany. The four who attended the entire training were Latika, Kari, Ida and Carolyn.

A knowledgeable, fun and enthusiastic group, they flowed beautifully. 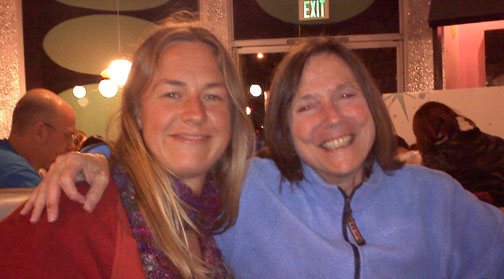 Following the training, Ida and partner Daniel returned to Sweden, concluding 3 months in the US. Ida was certified in Basics while in Santa Cruz and received Certification-in-Progress in Level 1.