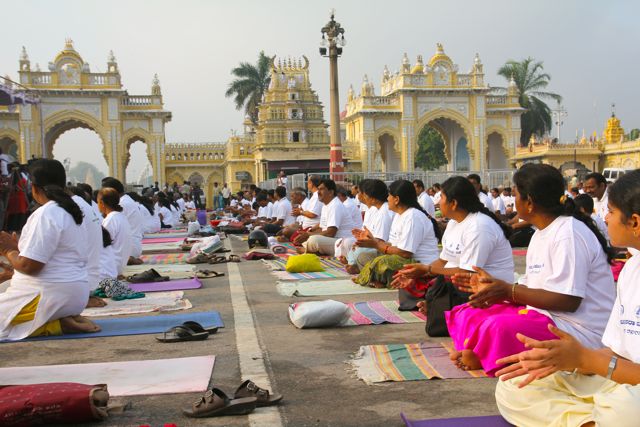 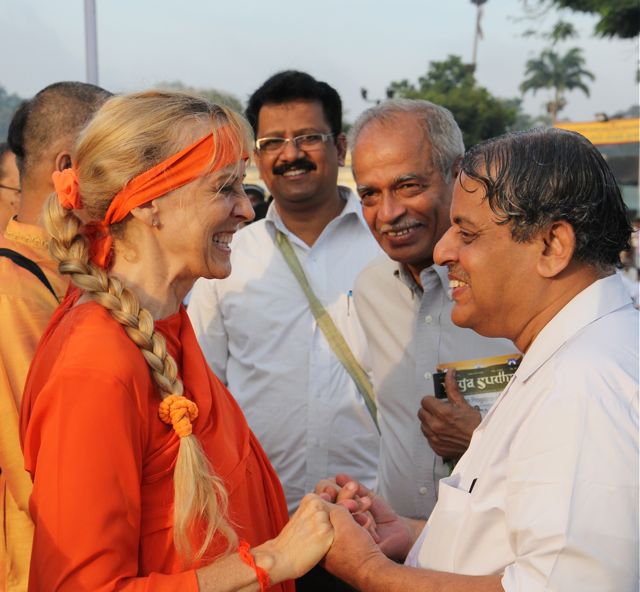 This morning’s honorary guests included Karnataka Medical and District Minister S A Ramadas, the renowned BKS Iyengar and Dr. Nagendra, a dear friend of Kaliji and a pioneer in the field of medical research on yoga. Here, Kaliji greets Dr. Nagendra upon arrival. 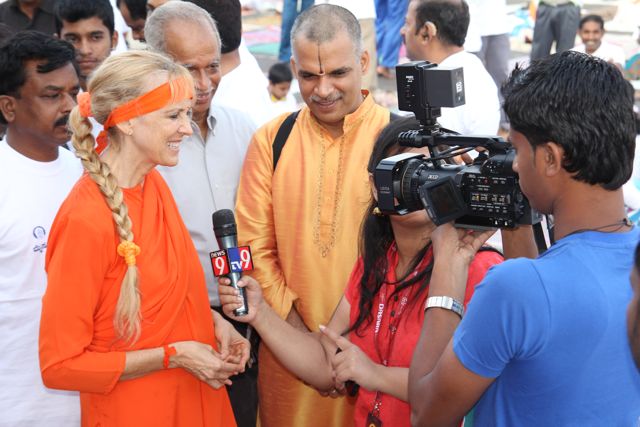 Kaliji was the only speaker from the West. It is very rare for India to invite “Westerners” to speak on yoga, especially at the nationwide, government level conferences. Yet, with Kaliji it is the opposite ~ she is not seen as a Westerner. In India, people recognize Kaliji’s presence immediately, and say that she is living proof that Yoga is Universal, that she brings them back to the true meaning of yoga, and brings forth deep respect for their culture that kept yoga knowledge alive for thousands of years. 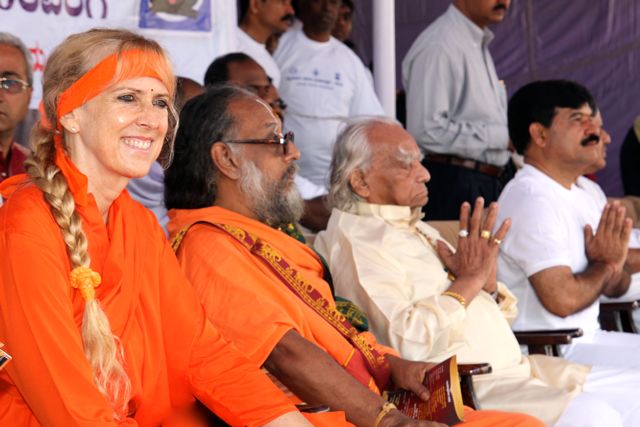 The conference was broadcast live on TV9, the Karnataka TV station, as well as shown later on other TV channels. Here, Kaliji is interviewed for TV9. Next to Kaliji is Dr. Ragavendra Pai, who was again responsible for bringing Kaliji to another conference. 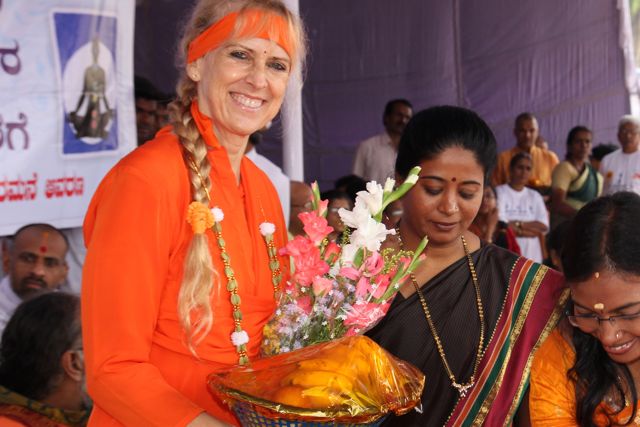 As always in India, the festivities began with the opening prayer. Here, Kaliji sits with the honorary guests. 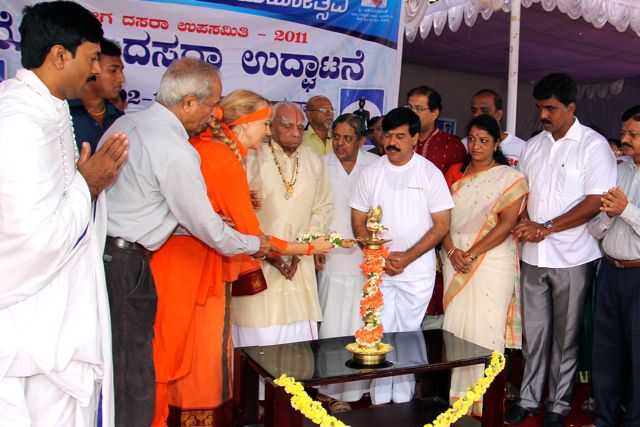 After the prayer, all the guests were honored with garlands and flowers. 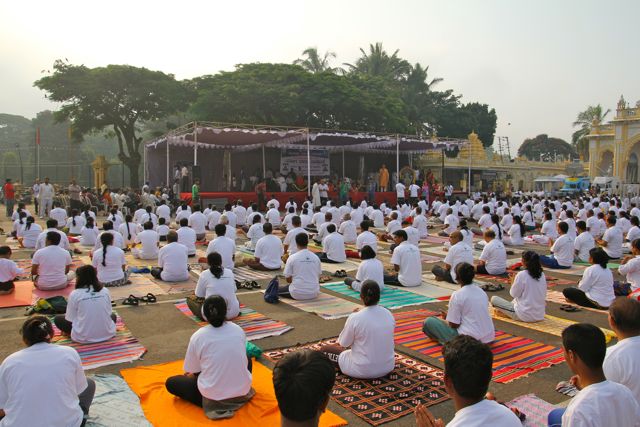 All programs in India start with the symbolic light being lit by the presenters. Kaliji lit the lamp for the conference. 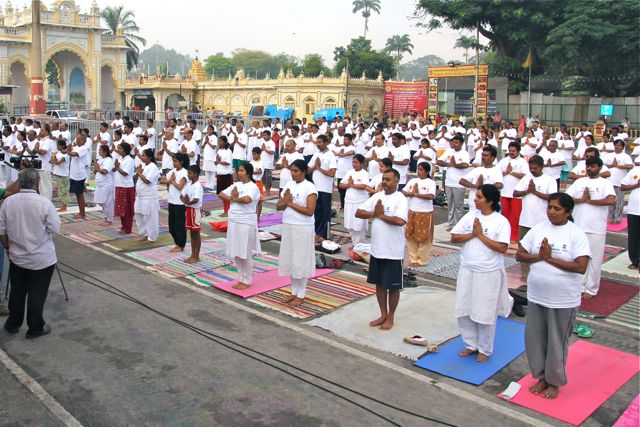 Dr Pai guided a group chanting of the mantras, which proceeded the group Surya Namaskar. 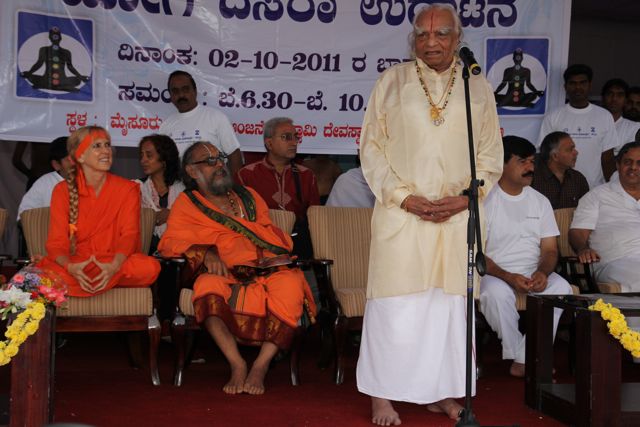 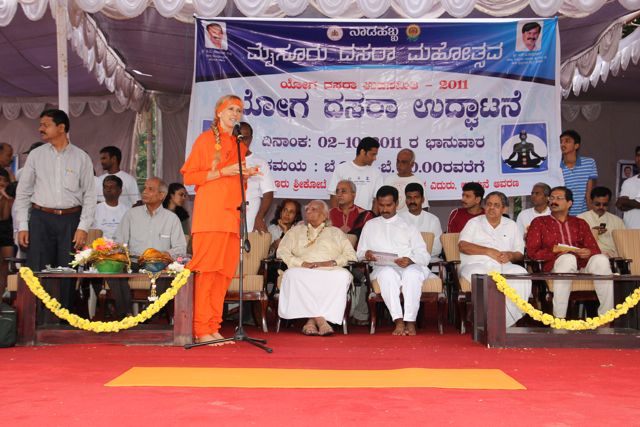 BKS Iyengar was the first to give the discourse on Yoga. 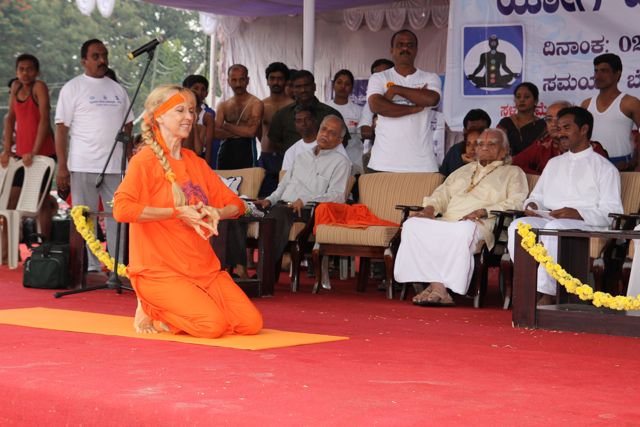 Kaliji gave both a discourse and a Devi Dance demonstration. Kaliji began her talk with words of gratitude to all the speakers for their contribution in the field of Yoga.

When speaking on Yoga, it doesn’t take a lot of time for Kaliji to inspire the audience. Within 5 minutes, she inspired everyone to begin or to continue their yoga sadhana. 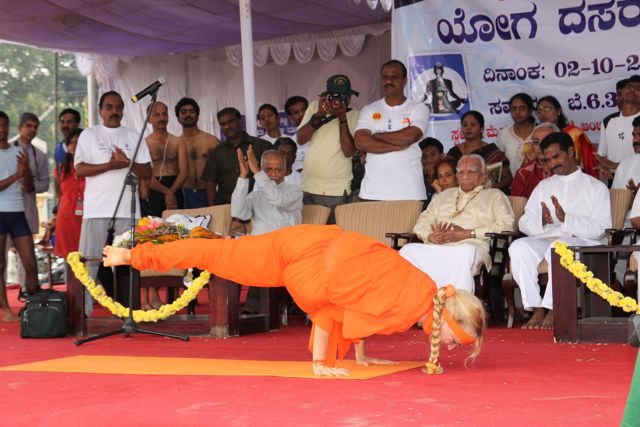 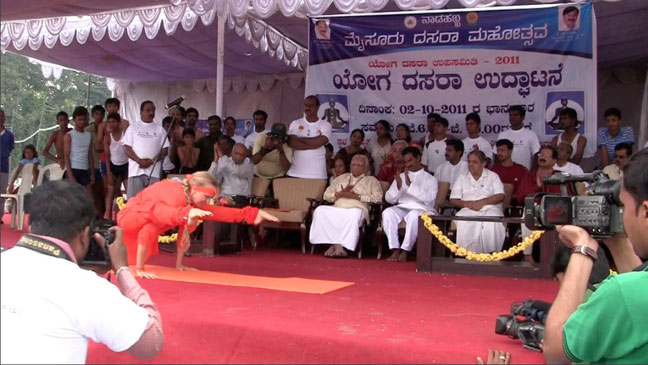 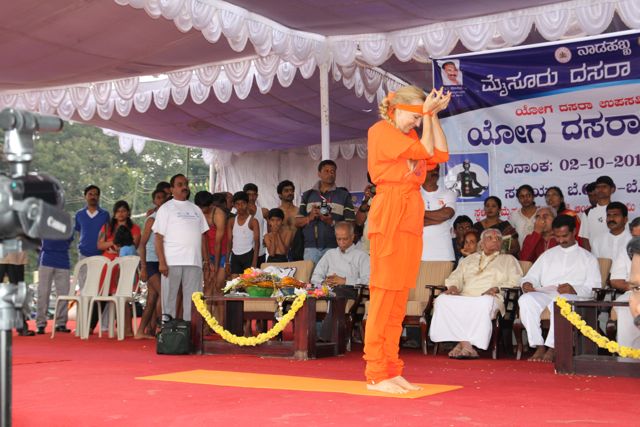 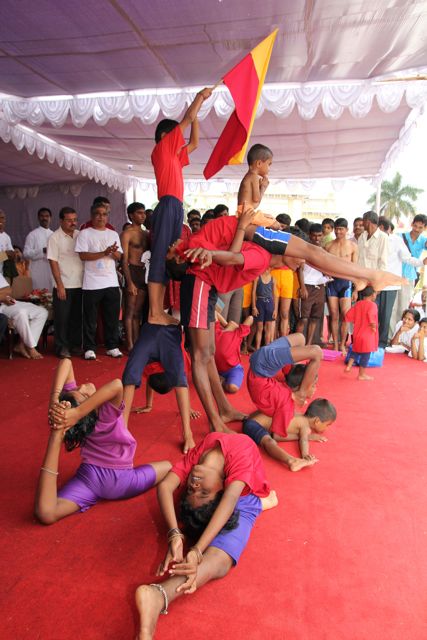 The program continued with the demonstrations by the visually impaired children. 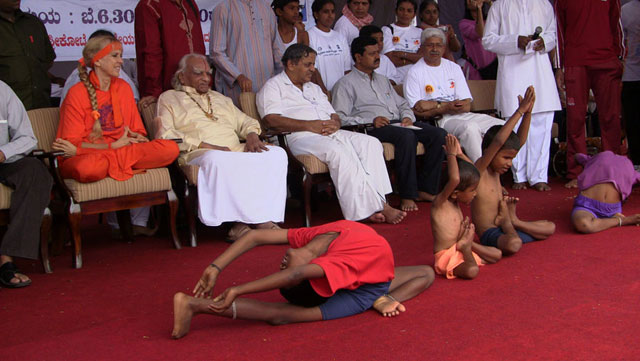 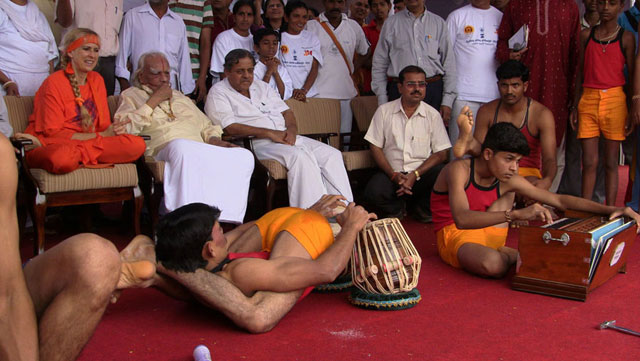 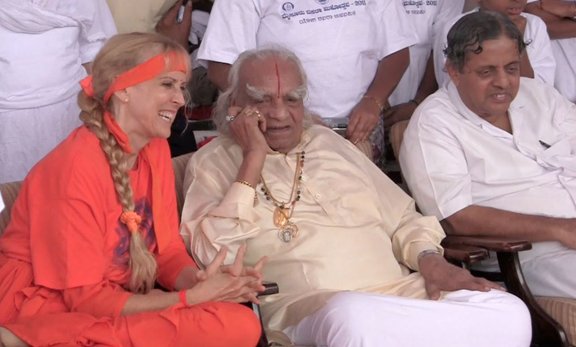 BKS Iyengar and Kaliji exchanging their impressions of the young practitioners.

A scene that can be found only in India: 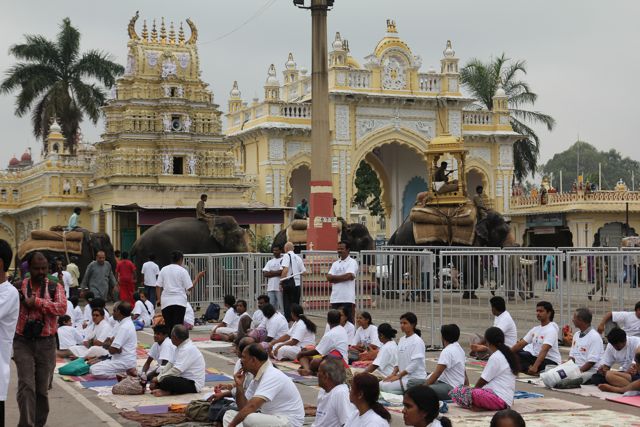 During the program, a procession of elephants left the Palace to merge with the traffic on the Mysore roads! 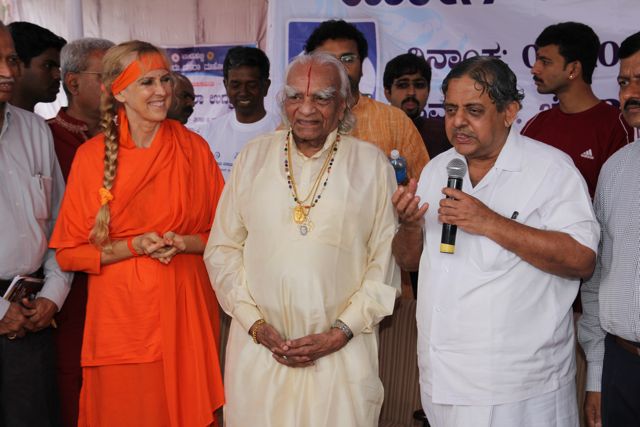 A talk by Dr Nagendra concluded the conference.

As soon as the program was over, Kaliji returned to the ashrama to zip up her suitcase and take a flight to Northern India, where another big conference was waiting for her presence. 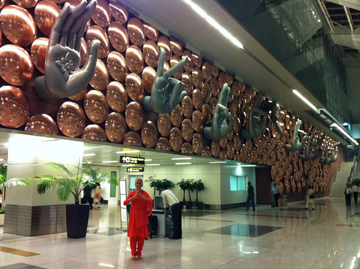 Arriving at the Delhi airport, Kaliji was pleasantly surprised to find it reconstructed. The new decor includes mudras! 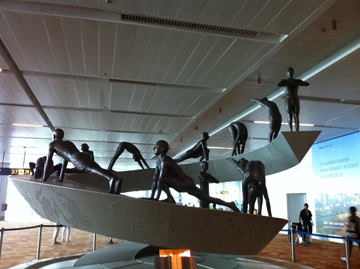 Another piece of art at Delhi airport – Surya Namaskar.