Kaliji was the keynote speaker and honorary guest at the Dasara Yoga Festival in Mysore. This annual event coincides with Navaratri (the nine night celebration of Devi), and other honorary guests included District-in-Charge Minister S.A. Ramdas and yoga teacher BKS Iyengar. The opening ceremony took place at the Rajendra Spiritual Auditorium and was attended by hundreds of yoga teachers and students, as well as many college students and members of the community. 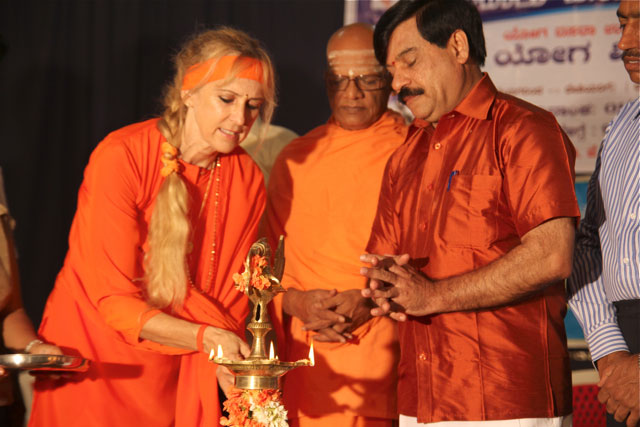 Kaliji and the other honored guests were asked to light the celebratory lamp. 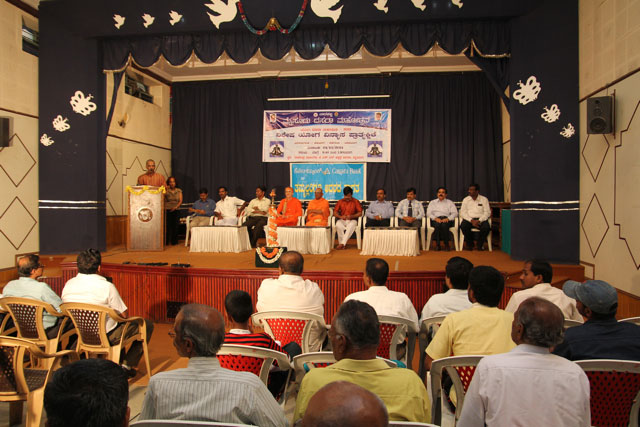 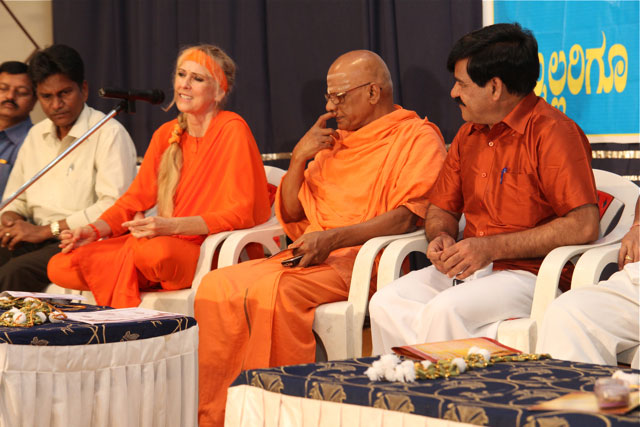 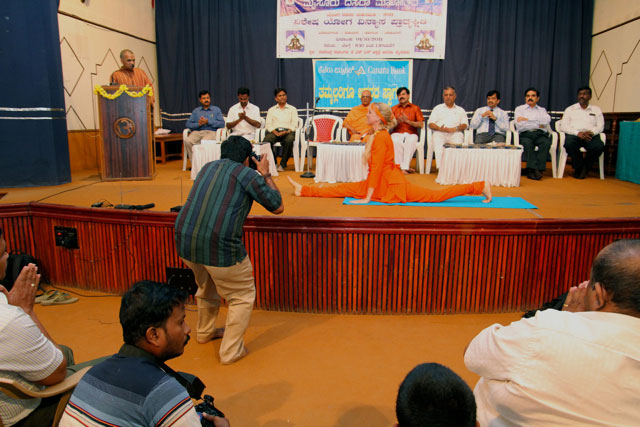 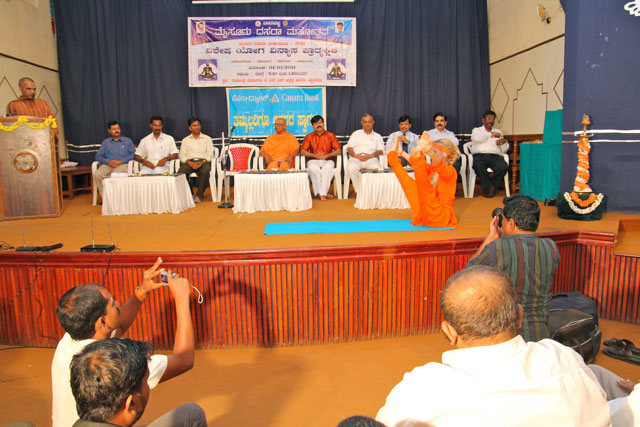 All were deeply appreciative of Kaliji’s presence, of her wisdom, light and grace. 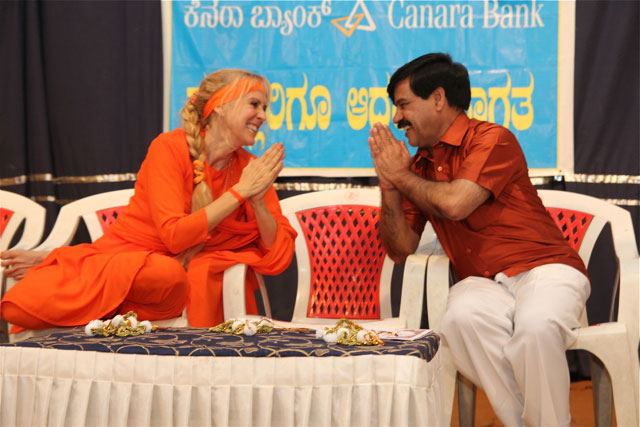 Minister Ramdas expressed his great happiness at meeting “the person who embodies yoga” and was excited to arrange more programs with Kaliji to offer TriYoga to people in his area. 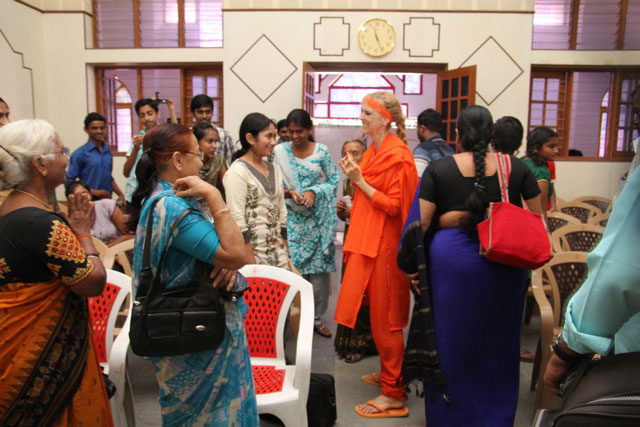 As always, many people wished to give Kaliji their thanks and appreciation in person! 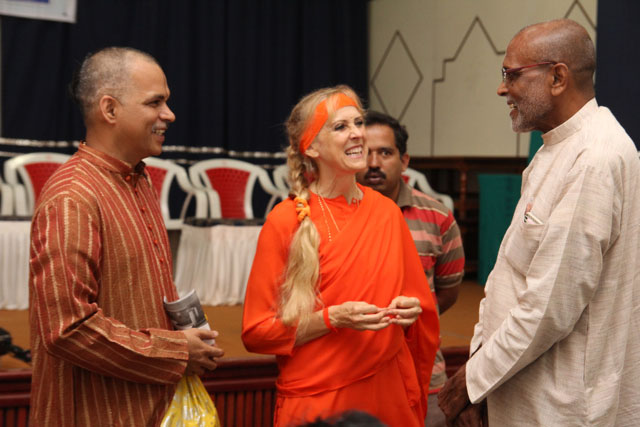 Shivkumar (far left), a local yoga teacher, met Kaliji on her last visit to India and was greatly impressed by her mudras, yogaflow, jnana (yoga knowledge) and the yoga lifestyle she personifies. 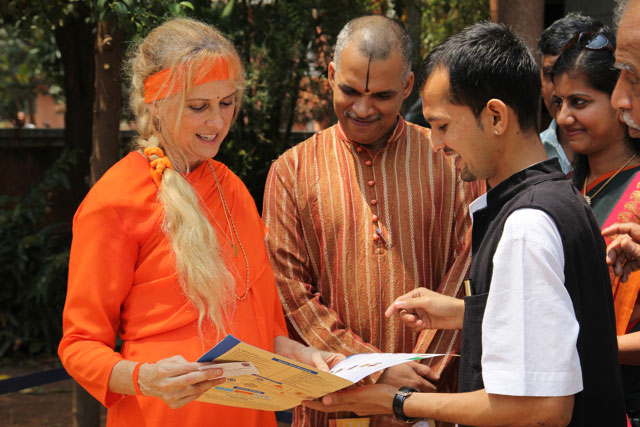 Kaliji will be the keynote speaker for the upcoming Yoga Conference (February, 2012). Here, one of Dr. Paiâ€™s students shows Kaliji the brochure announcing her attendance.

Dasara Yoga Conference was sponsored in part by Canara Bank, and one of the bank representatives, Srinivas Murthy, was so excited by Kalijiâ€™s talk that he asked her to come to the bank and give a discourse and mudra demonstration to the bank employees. Kaliji happily agreed â€“ and only a few hours later, the Canara Bank of Mysore received their honored guest. 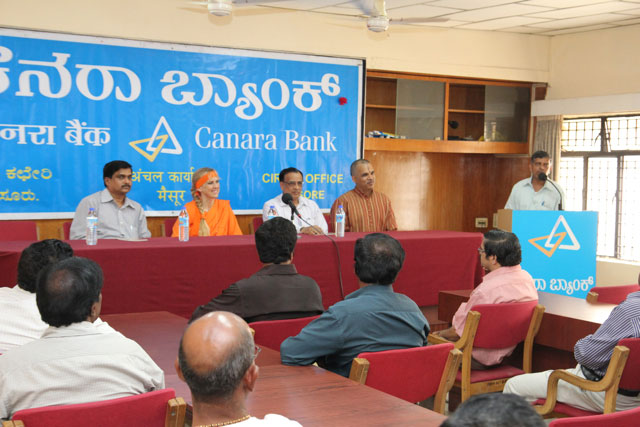 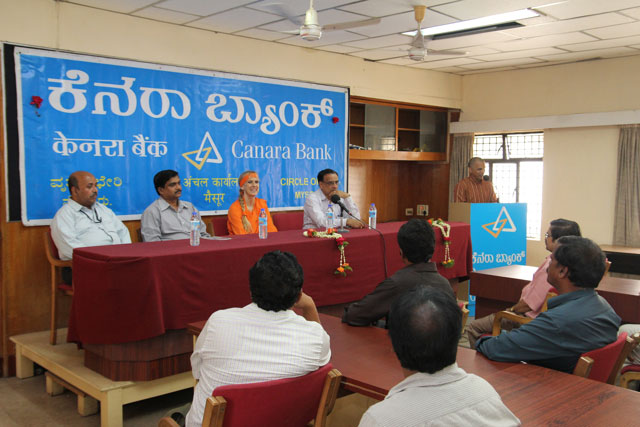 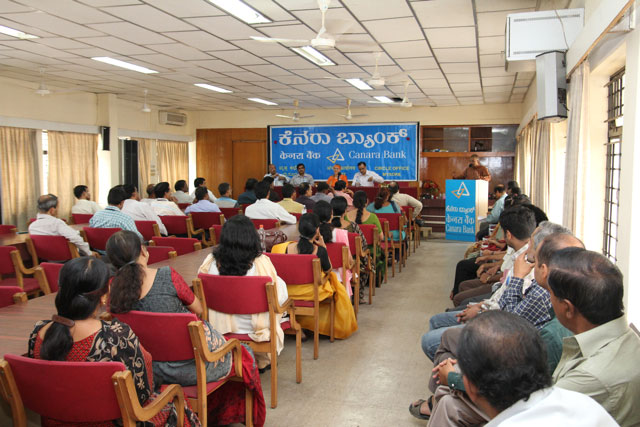 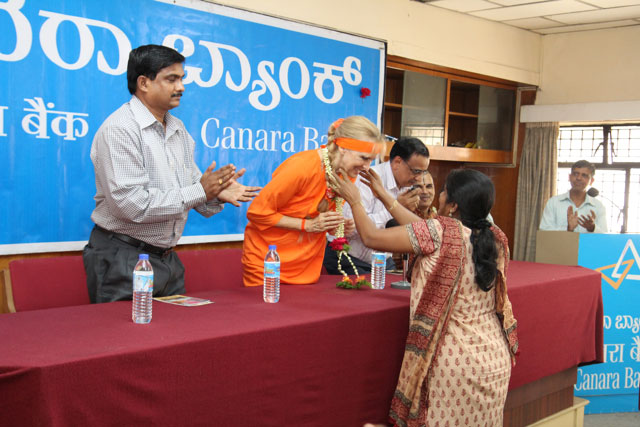 Dr. Pai gave an outstanding introduction, and the employees honored Kaliji with a garland. 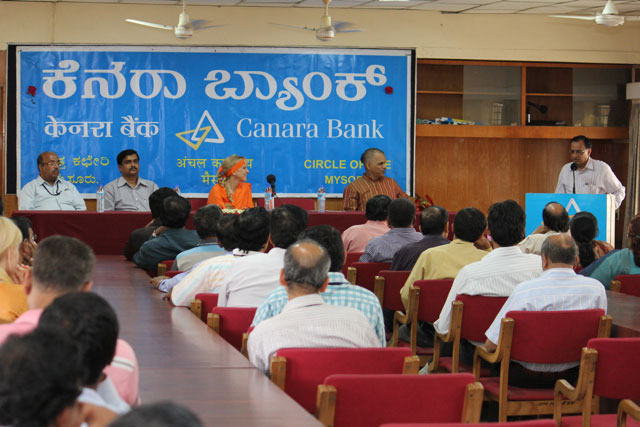 After listening to Mr Murthy, Kaliji said she was very happy to find a â€œyoga bankâ€. Canara Bank is the oldest bank in India, founded by a local philanthropist in 1906. The principle values of the bank included financial education, service, dedication, and removing hardship and suffering.

The Mysore branch displays a large poster with a quote from the founder, A. Subba Rao Pai:

“A good bank is not only the financial heart of the community, but also one with an obligation of helping in every possible manner to improve the economic conditions of the common people.” 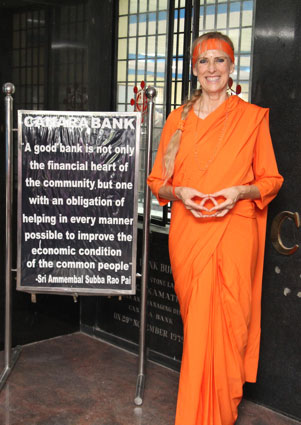 Kaliji posed for pictures at the branch entrance, and Mr. Murthy sent copies of these photographs to all 3800 branches of Canara Bank, so that all employees could have the opportunity to see her, and a video of the visit was sent to the bank executives. 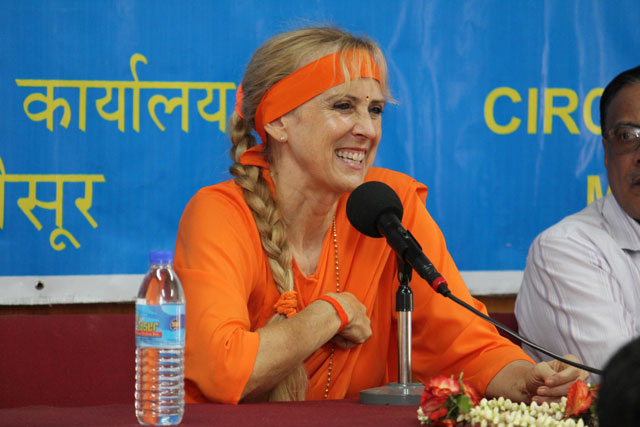 As requested, Kaliji gave a discourse on Yoga Lifestyle, full of practical knowledgeâ€¦ 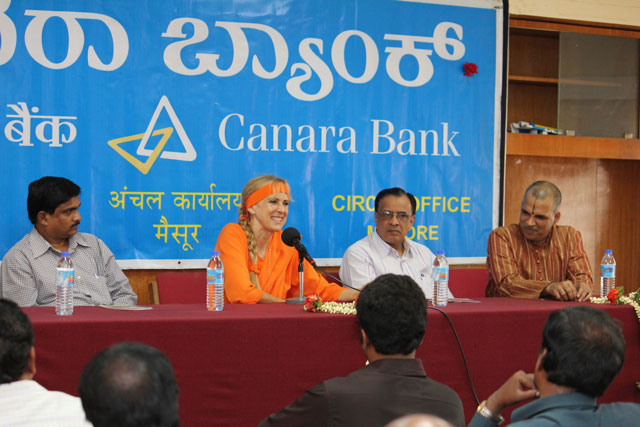 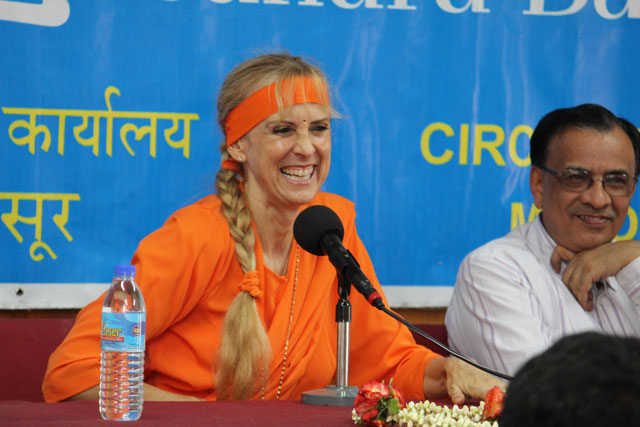 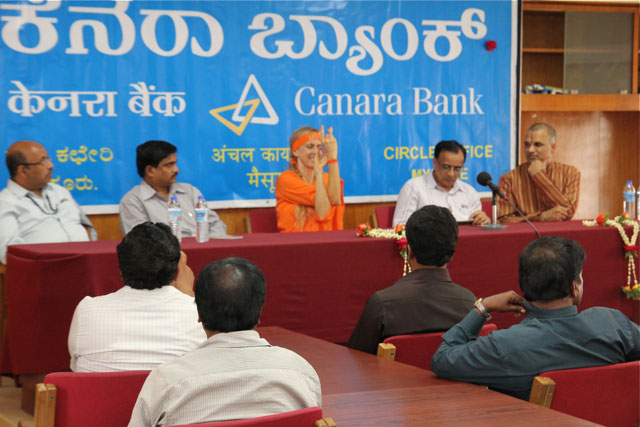 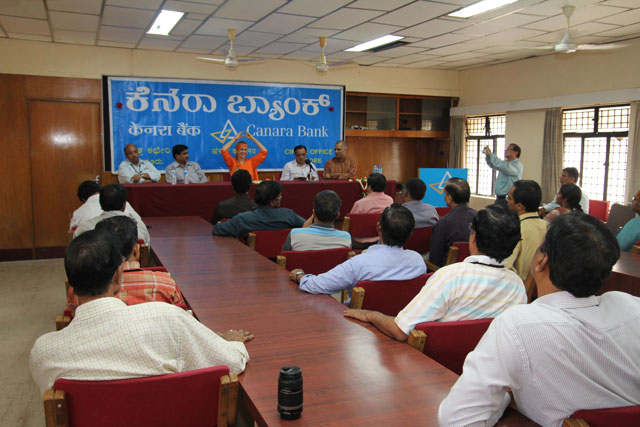 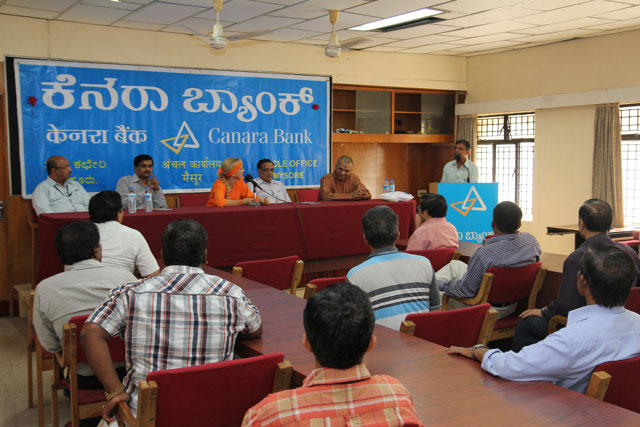 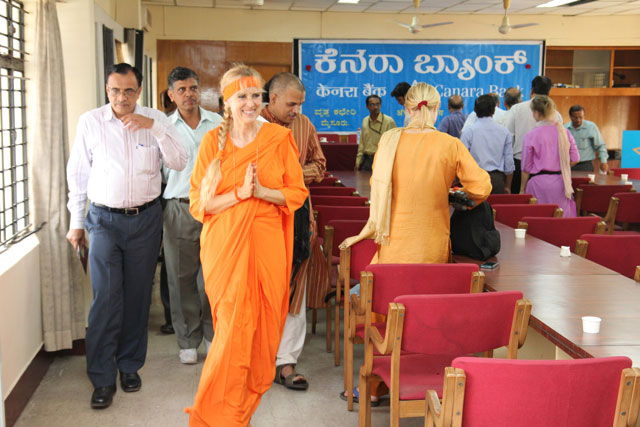 After the program Kaliji was shown the bank offices. 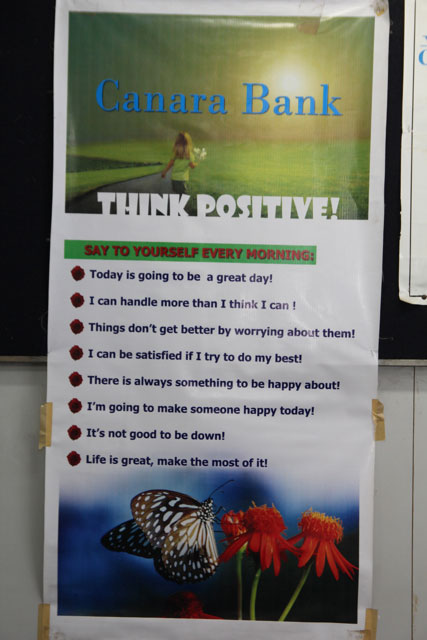 A calendar page on the wall of the main office. 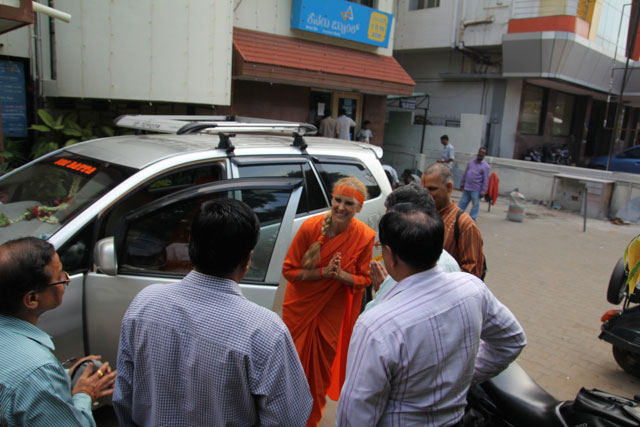 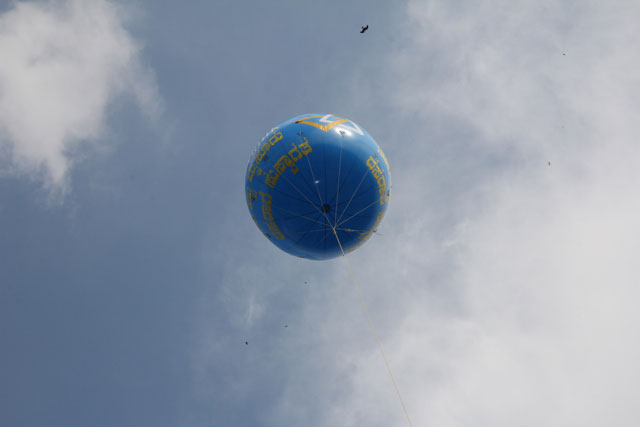