After departing China, Kaliji began a surprise Yatra (tour) to India! Although scheduled to return to the United States after her visit to Shenzhen, when departing Los Angeles Kaliji told those with her “I have a feeling I am not returning to the US before Japan”. While in China, Kaliji received invitations as a keynote speaker and honored guest at two major conferences in India: the Dasara Yoga Festival in Mysore and the Yog, Culture and Spirituality Conference in Haridwar. So, instead of returning to California, Kaliji arrived in Bangalore on September 19. 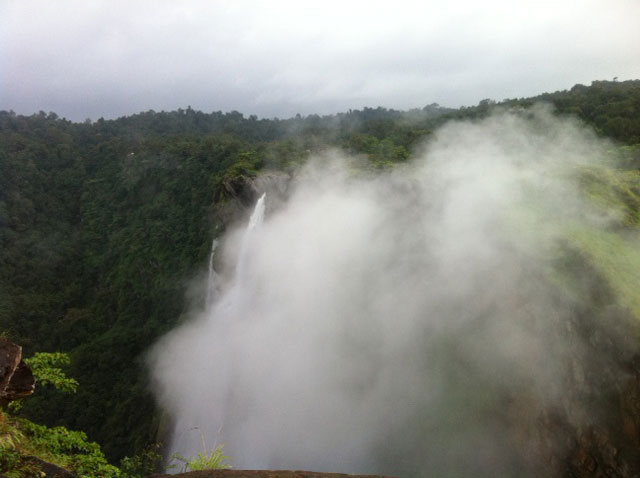 Kaliji’s journey began at the Mysore ashrama of Sri Ganapati Sachchidananda Swamiji, and then she joined Sri Swamiji at Jog Falls. Jog Falls, located in the Shimoga district of Karnataka state, are the second tallest in India (830 ft) and considered by many to be the most beautiful. They are uniquely un-tiered: the water falls directly without streaming onto rocks. Read more about Jog Waterfalls here. 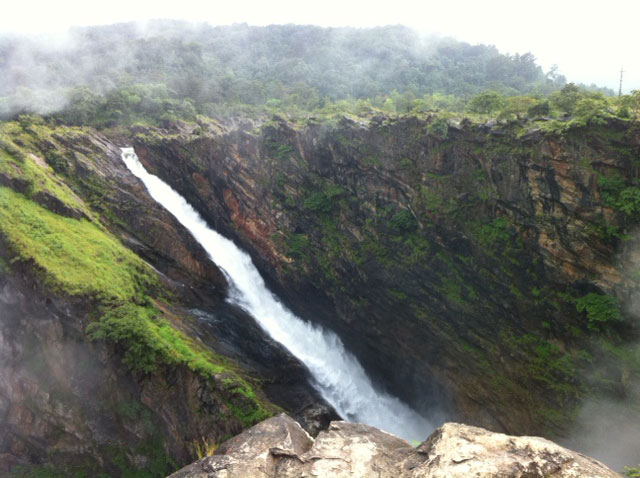 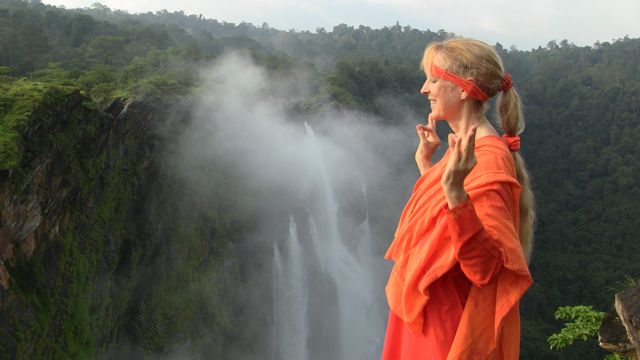 Kaliji arrived with the sunrise, and the morning light was a perfect complement to the majestic beauty of the Fallsâ€¦as well as the beauty of mudras flowing through Kaliji’s hands. 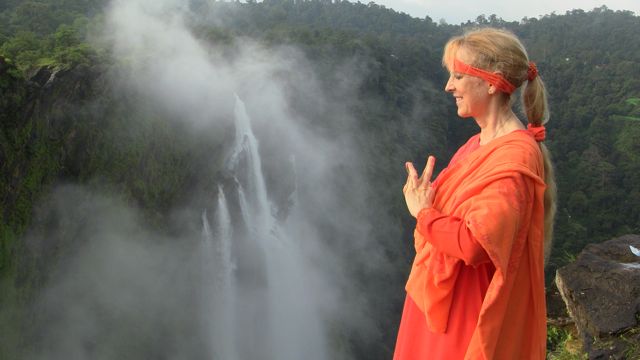 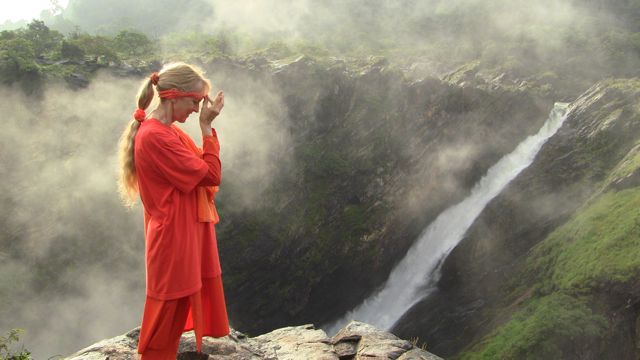 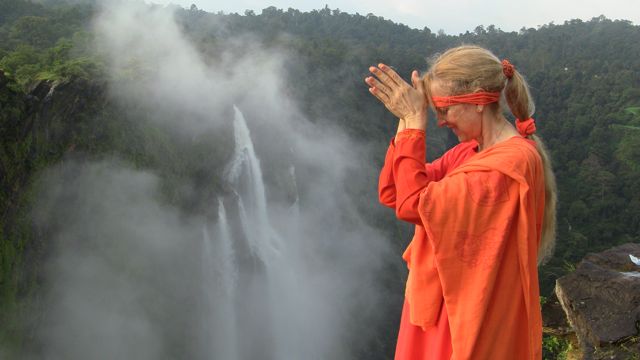 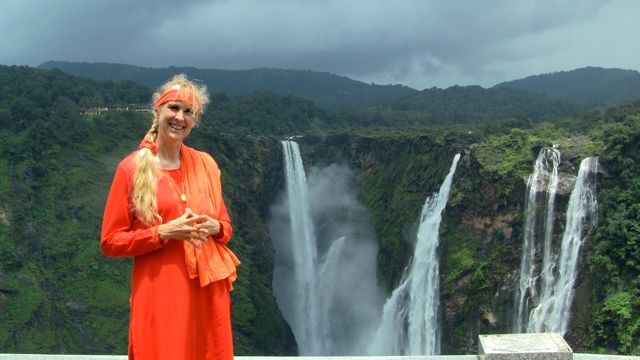 While enjoying the breathtaking, roaring waterfalls, Kaliji was surprised to learn that in only 2 months there will be nothing left but a tiny, trickling stream, if there is any water at all! It is only during and after the monsoon season (especially in September-October) that the waterfalls spring to life.

Watch a video of Kaliji at Jog Falls here. 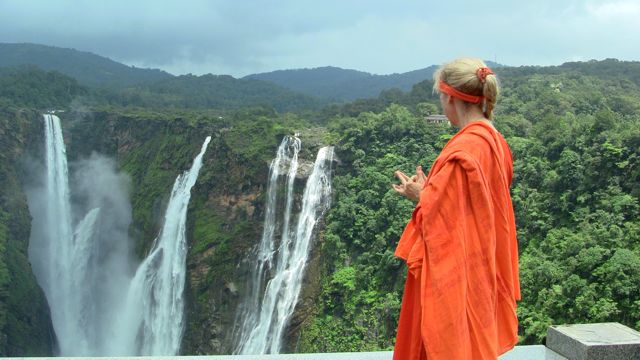 After spending a few days in Mysore at Sri Swamiji’s Datta Avadhoota Peetham ashrama, Kaliji and assistants journeyed to the pilgrimage site of Jayalakshmipuram in southern Andhra Pradesh State. It is here that Sri Swamiji spent his childhood years receiving special instruction from Matajayalakshmi, his beloved mother and Guru, and where Matajayalakshmi consciously took her last breath. 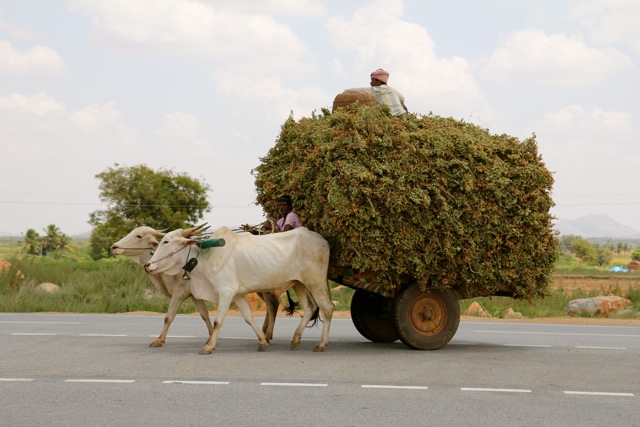 A common road scene in India 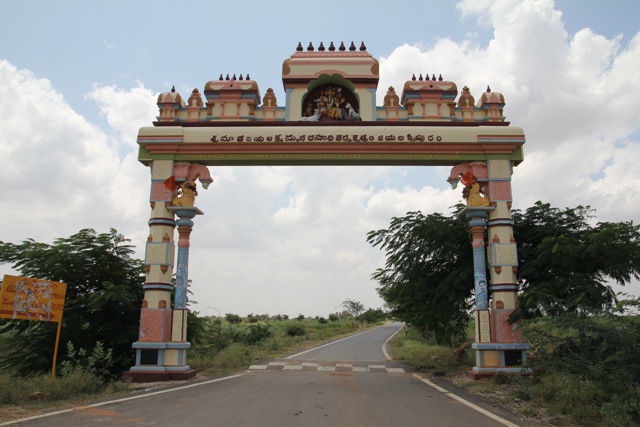 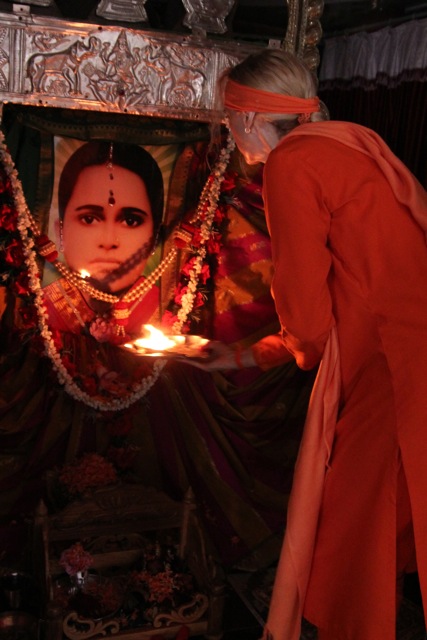 Always in the Flow, Kaliji arrived at the time for evening prayers and arati (offering of the lights).

Jayalakshmi Puram (also known as Bommeparti) is a very rural village where electricy and running water are still luxuries in most homes. Even where available, service is sporadic and often unreliable. With Kaliji, even these “inconveniences” occur in the Flow. As soon as she suggested that all quietly sit at the site of Matajayalakshmi’s samadhi, the lights went off…leaving all present to immerse themselves into this peaceful experience. All were greatly moved and the conversation focussed on the blissful presence that everyone felt. Even the manager greeted the group with a relaxed smile and said “We do not want to ever leave this place…all you need is just 10 minutes to sit in front of Mataji and you cannot help but to feel so blissful.”

He then invited Kaliji outside so he could speak more about the ashrama, and again the lights went off. Everyone immediately exclaimed about the beauty of the night sky: with the lights off the sky was filled with countless brilliant stars. Starlight created the perfect ambience for the magical stories shared by the manager.

The next morning, Kaliji attended the morning puja, took a walk around the grounds of the ashrama, visited the house where Sri Swamiji was raised and visited the tiny Hanuman temple next door. When Sri Swamiji was 12, his mother brought him to this temple in the middle of the night for a special initiation. 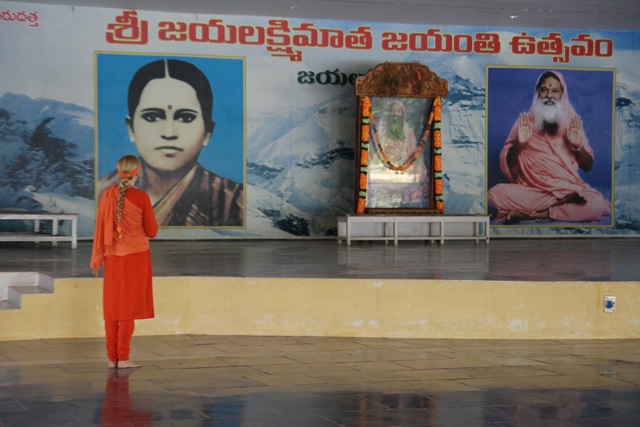 Kaliji inside the ashrama auditorium 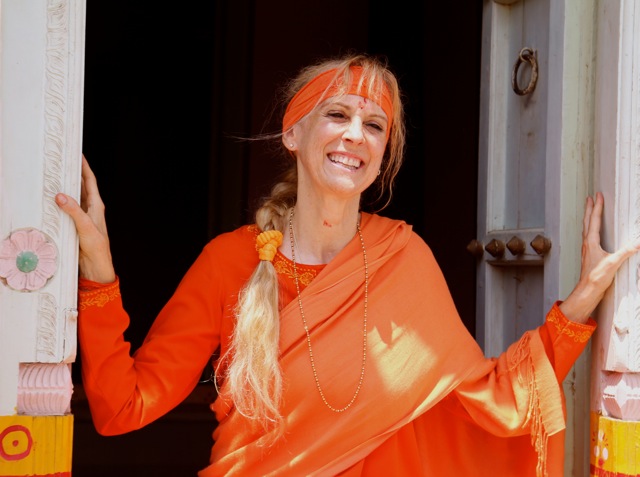 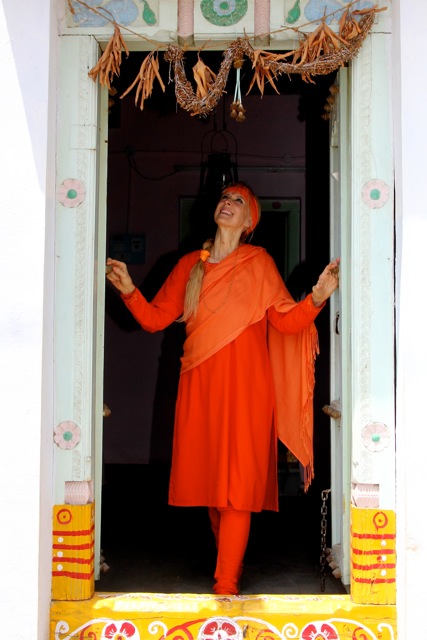 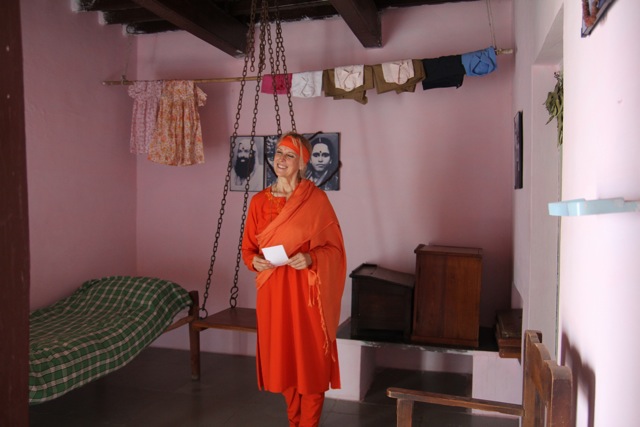 Kaliji in the largest room of the house. 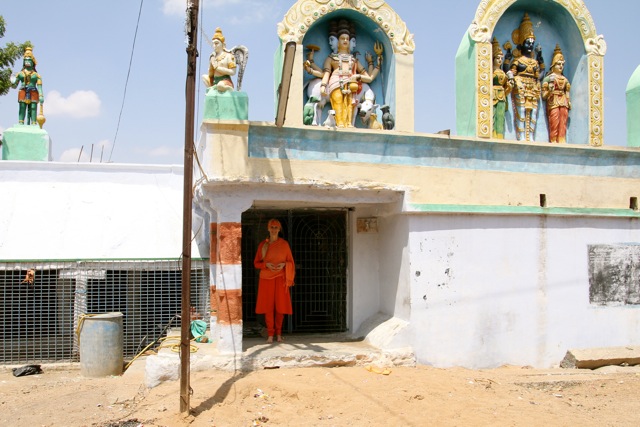 Next door is a tiny Hanuman Temple. When Sri Swamiji was 12, his mother took him there in the middle of the night for a special initiation. Here, Kaliji stands at the entrance of the temple. 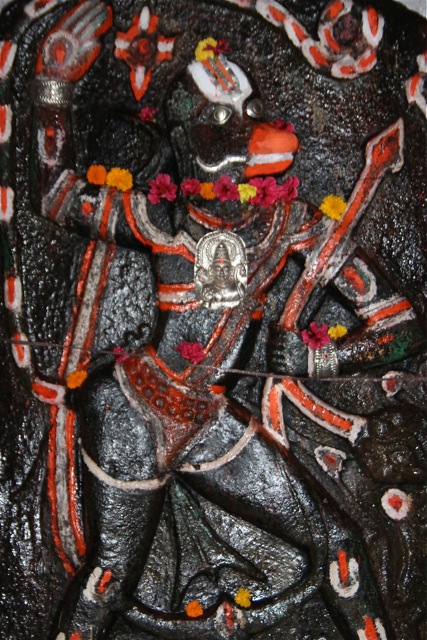 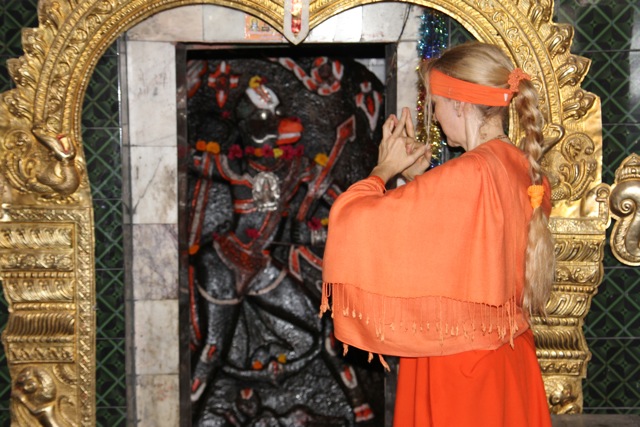 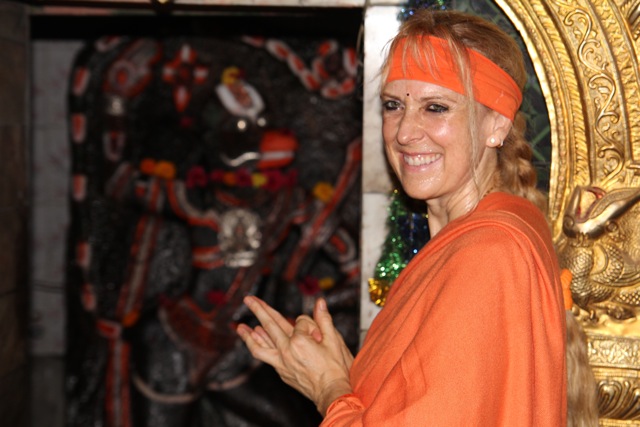 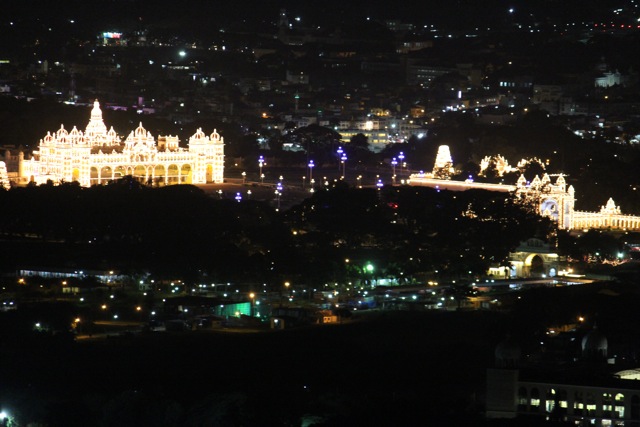 Kaliji returned to Mysore Ashrama on the first night of Navaratri (9 nights celebrating Mother Goddess). Navaratri is the brightest holiday in Mysore, and the whole town is filled with lights: streets, crossroads, hills, temples and civil buildings . The centerpiece is Mysore Palace, lit with thousands and thousands of lights.

Mysore Palace, seen from the top of Chamundi Hill. 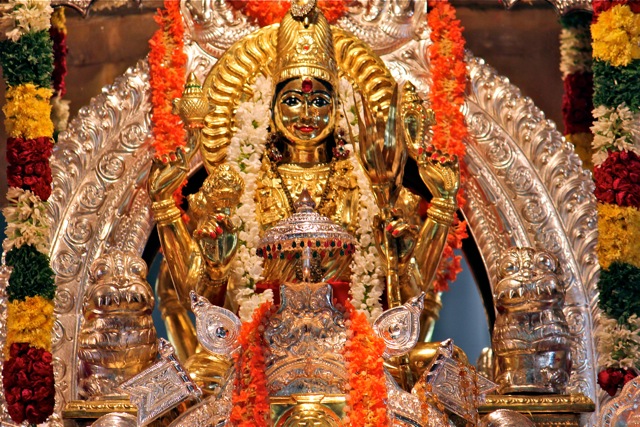 Elaborate Navaratri Pujas are performed each day of the festival day by Sri Swamiji, and are accompanied by live music performances. Renowned musicians consider it an honor to play Sri Swamiji’s compositions in his ashrama. 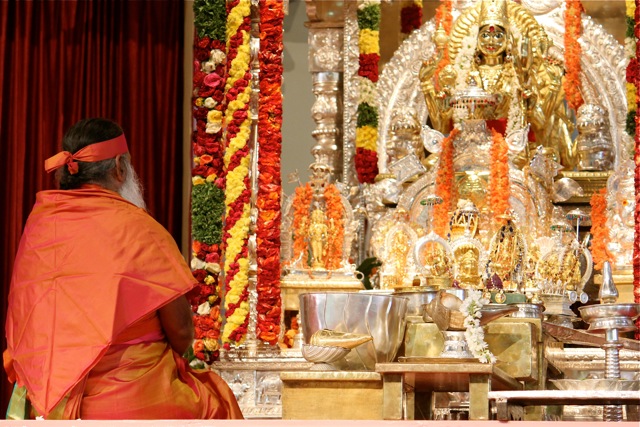 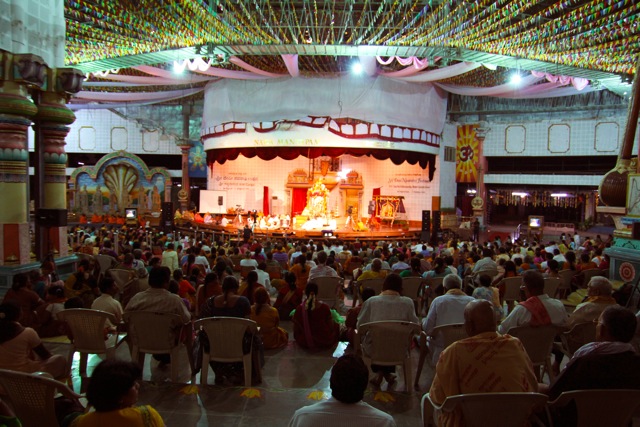 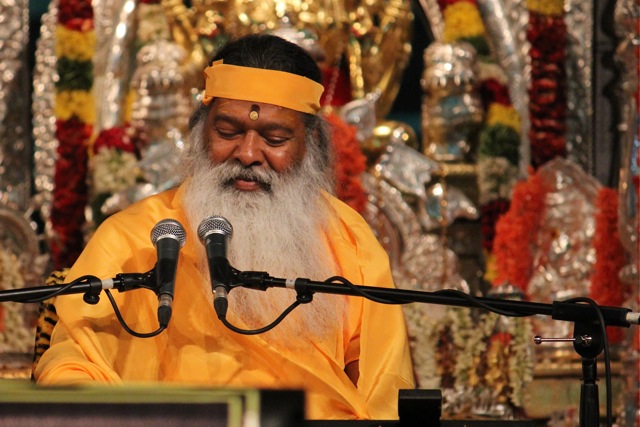 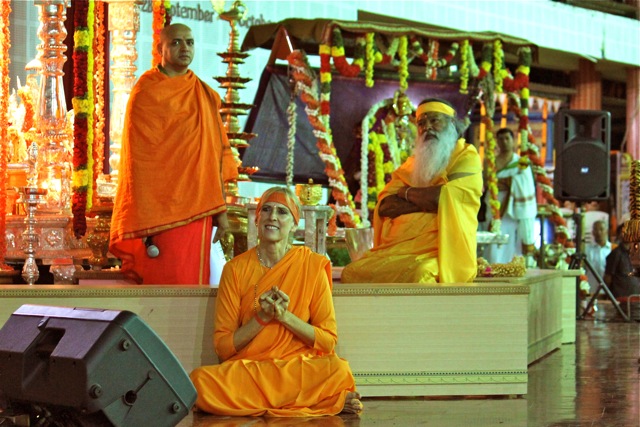 Kaliji and Swamiji on stage, watching the trailer for the new movie of Sri Swamiji’s visits to waterfalls around the world.