Journey to India began with a visit to Mysore from December 23-28, featuring Kaliji’s 5th India TriYoga Yatra and amazing programs at the Datta Peetham Ashrama of Sri Ganapati Sachchidananda Swamiji.

Kaliji’s yatras are organized by the highly respected yoga teacher, Dr. Raghavendra Pai and the SKRS Pai Memorial Sri Vedavyasa Yoga Foundation. During the yatras Kaliji presents a variety of programs in the local community, including public demonstrations and talks, media and public relations events and meetings with local dignitaries. Kaliji has become very well known in the city of Mysore and Karnataka State through local and national press coverage and increasingly high-profile yatra programs. Video from all 5 yatras can be seen here. 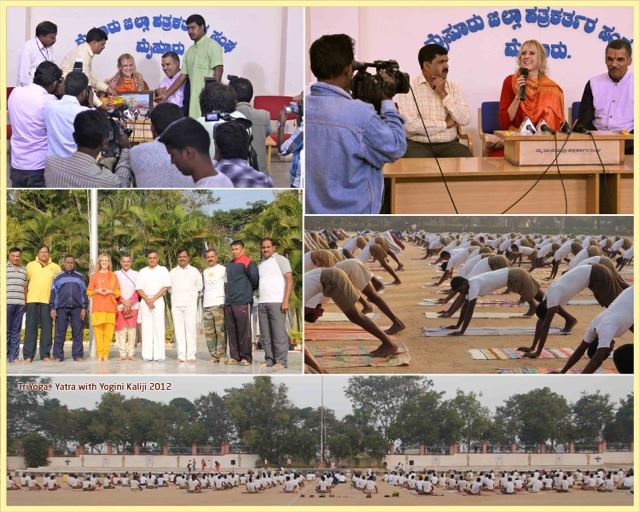 To begin the yatra, Kaliji was “Guest of the Month” at the District Press Club in Mysore. 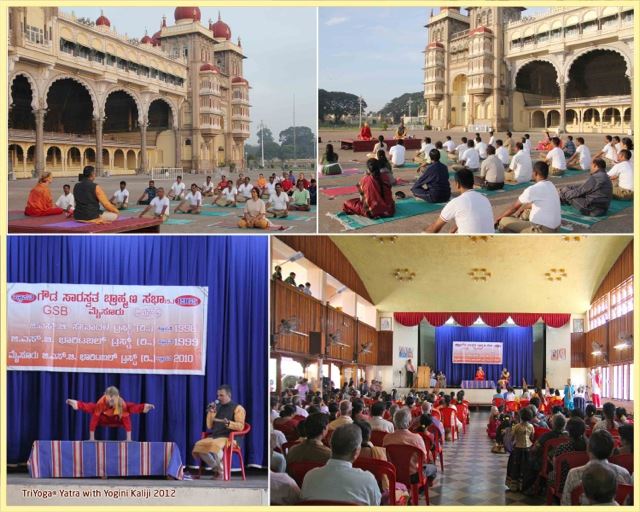 Another yatra event was held at Gouda Saraswatha Brahmana Samaj, with over 500 in attendance. 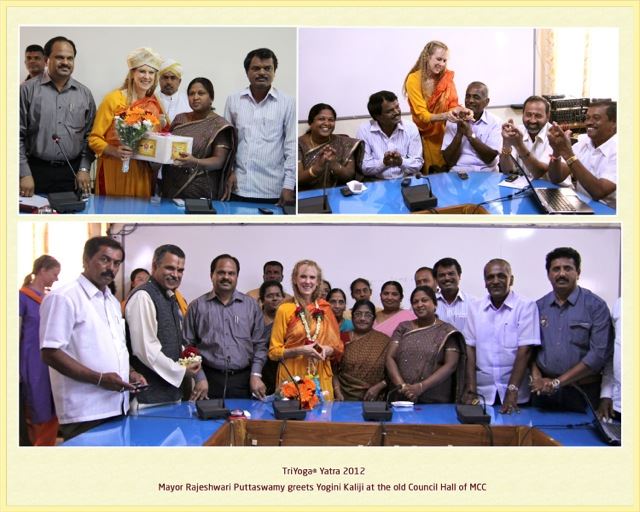 Kaliji was titled Guest of Honor by Mysore Mayor Rajeshi Puttaswamy during a visit to Mysore City Hall. Kaliji gave a talk and a mudra demonstration for the Mayor and City Hall Officers and staff. 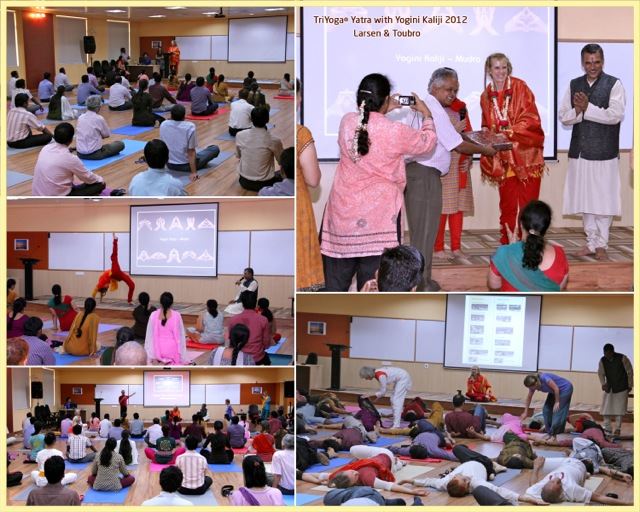 The yatra concluded with a class and demonstration at the Mysore office of Larsen & Toubro Engineering. The engineers and staff were thrilled to practice TriYoga and are awaiting Kaliji’s return!

The second half of the Mysore tour was focused on events at the Datta Peetham ashrama. First was the inauguration of the incredible 70 foot tall Sri Karya Siddhi Hanuman, an extremely rare and auspicious event! The inauguration was attended by tens of thousands of people, and the ashrama served over 60,000 free meals in one day. Second was the celebration of Datta Jayanti, an annual event that packs the ashrama with devotees and features a variety of pujas and rituals and lots of music! Full coverage can be found at the Datta Peetham website: under the “What’s New” menu, select “Karya Siddhi Hanuman Inauguration & Datta Jayanti ~ Dec 2012”. 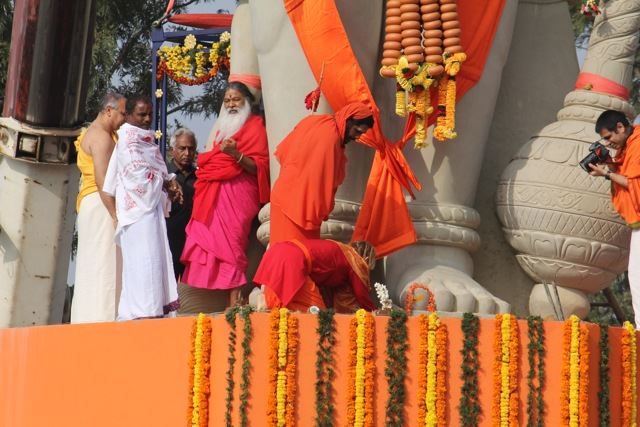 The most auspicious and important ritual in the inauguration of a holy murti (idol) is Yantra Patishtha–the placing of a special yatra at the foot of the idol. This yatra “invokes” the energy of the deity into the idol and makes it “alive”. For the 70-foot Hanuman Yantra Patishtha, Sri Swamiji was lifted to the base of the Hanuman (30 ft high) by crane and the yantra was paced under Hanuman’s feet. Immediately after the ceremony, Kalii was invited to join Sri Swamiji. Kaliji was lifted by crane to the base of the Hanuman, where Kaliji had the incredible honor of offering prayers to the yantra in the presence of Sri Swamiji and Sri Bala Swamiji. Only a select few people were blessed with this rare opportunity. This amazing event was witnessed by everyone in the massive crowd. Afterward, Kaliji accompanied Sri Swamiji in the crane car that lowered them back to earth. 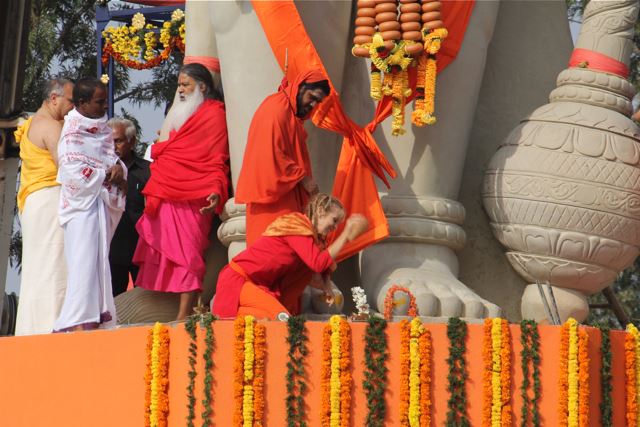 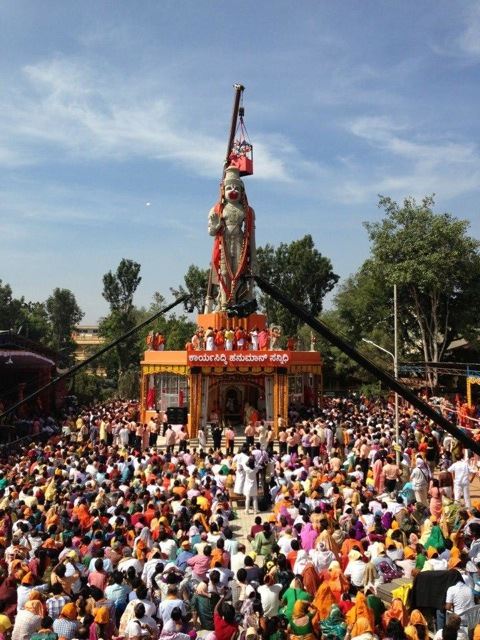 Maha abishekam performed by Sri Swamiji and Bala Swamiji, who were lifted by crane to the top of the Hanuman!

As part of the Datta Jayanti programs, Teppotsovam (raft festival) was held at the beautiful ashrama pond, modeled like Lake Mansarova at the foot of Mount Kailash. Kaliji is picture in the right foreground, observing puja. 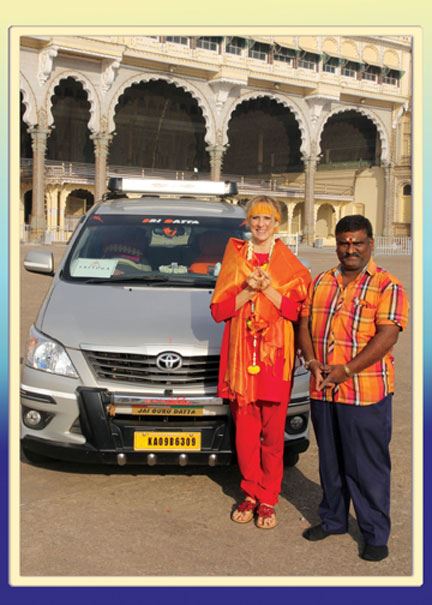 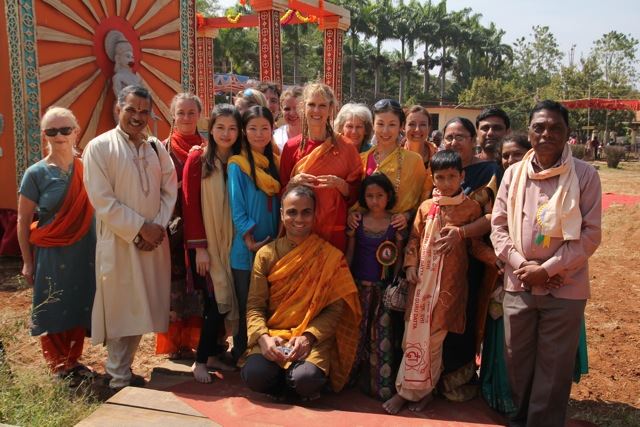