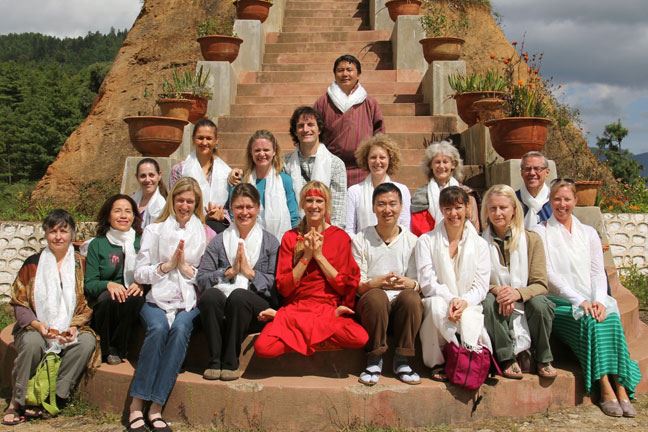 From October 1-7, Kaliji and a group of TriYoga teachers, students and friends joined for an amazing journey to the kingdom of Bhutan. The trip was organized by Victor Chng, who has coordinated numerous teaching trips to Asia for Kaliji and other TriYoga teachers. 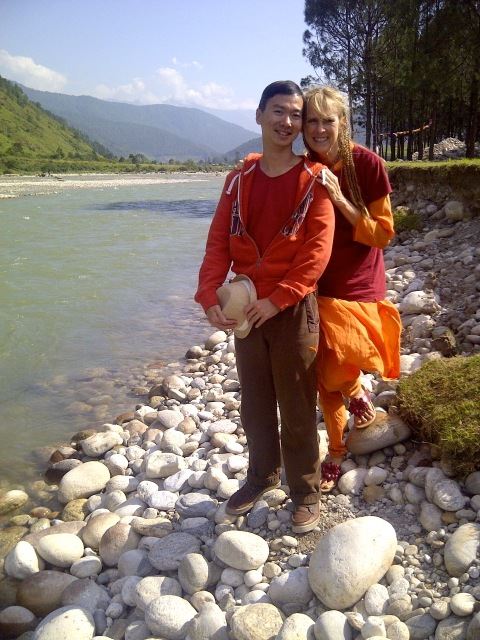 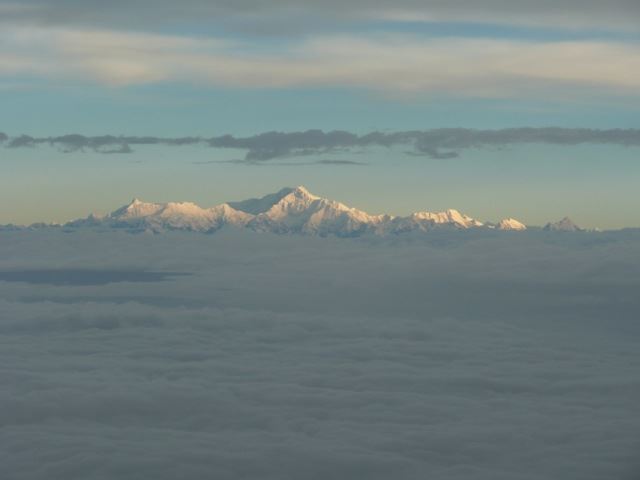 Bhutan is an entirely mountainous country in the Eastern Himalaya, bordered on three sides by India and to the north by China. Primarily a Bhuddist state, Bhutan has only been open to outside visitors since the 1960’s and its unique culture has remained largely unaffected by outside influences.

For many, the highlight of the trip was the sublime natural beauty of Bhutan and its pristine environment. The Bhutanese government has a strong commitment to preserving the environment and protecting the wildlife, with over 60% of the country remaining forested and 40% of its land dedicated to national parks.

The flight into Bhutan includes expansive views of the Eastern Himalaya. The landing at Paro Airport is very exciting, as the approach is along a narrow, steep sided valley at low elevation. Just before landing, the plane completes two consecutive 90 degree turns, with the ground just under the wings! Only eight pilots are qualified to land commercial aircraft at Paro.

The group stayed four nights at the beautiful and peaceful Nak-Sel resort in the Punakha Valley, at an elevation of 8850 feet (2,700 meters). 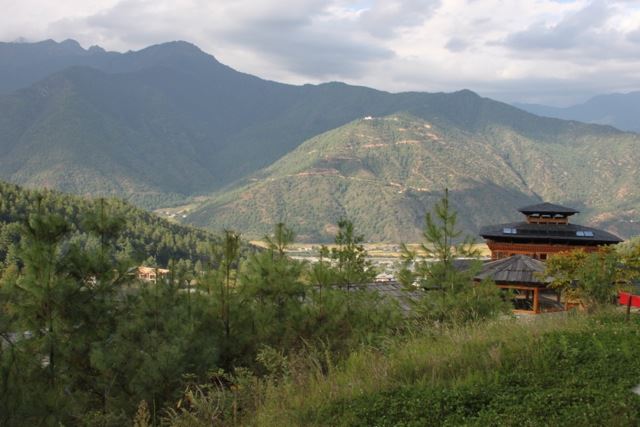 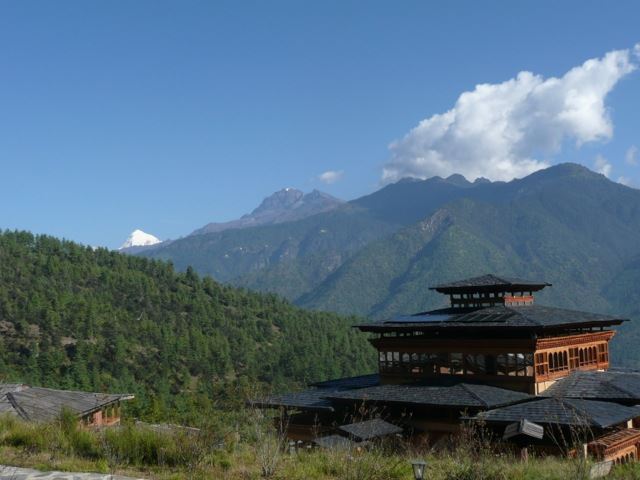 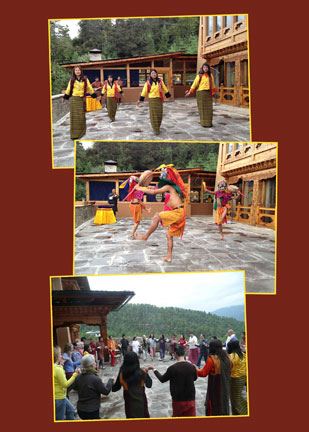 Upon arrival, they were greeted with a program of traditional Bhutanese dance! 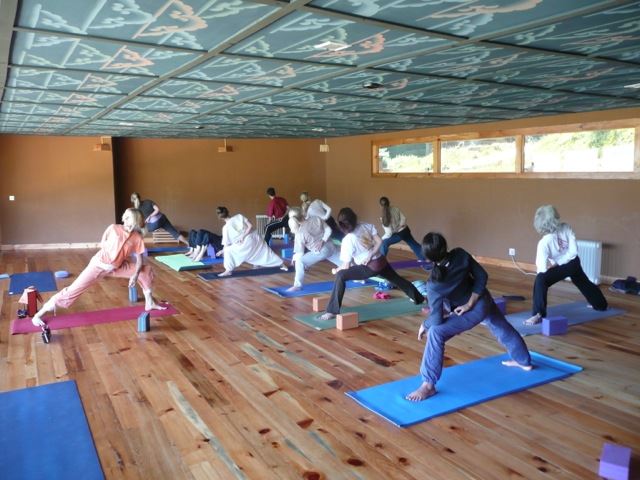 The yoga room at Nak-Sel had wonderful pine wood floors and a fantastic view. 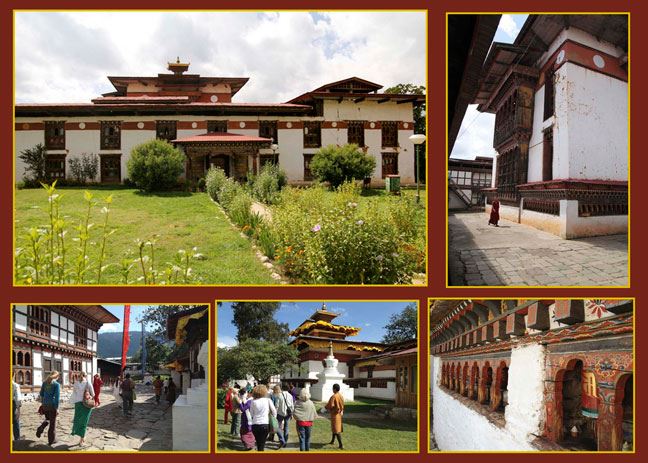 Sightseeing trips included visits to numerous Bhuddist monasteries and temples. In Bhutan, temples, monasteries, and schools are often high on the sides of mountains, requiring exciting drives or long walks to reach them! Bhutanese architecture features lots of hand-carved wood and painted murals, and temples are richly and colorfully decorated.

The second day in Bhutan included visits to two monasteries in the Paro Valley. 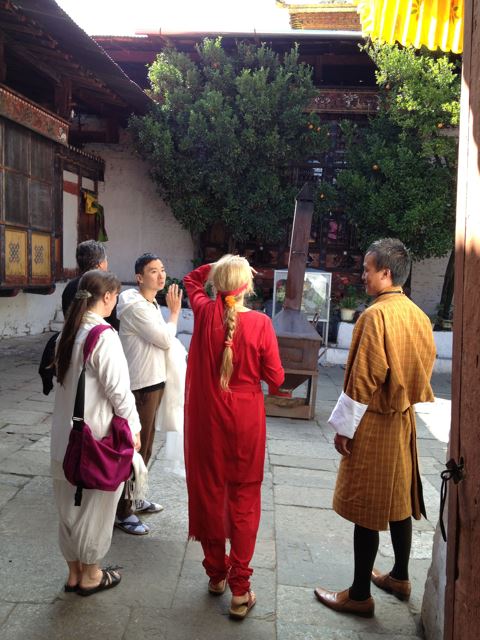 These two orange trees are at Kyichu Lhakhang, one of the oldest temples in Bhutan. These amazing trees give fruit year round, even throughout the winter. The larger tree on the left is very old, and as it started show signs of aging a new tree started growing on the right and to bear fruit. 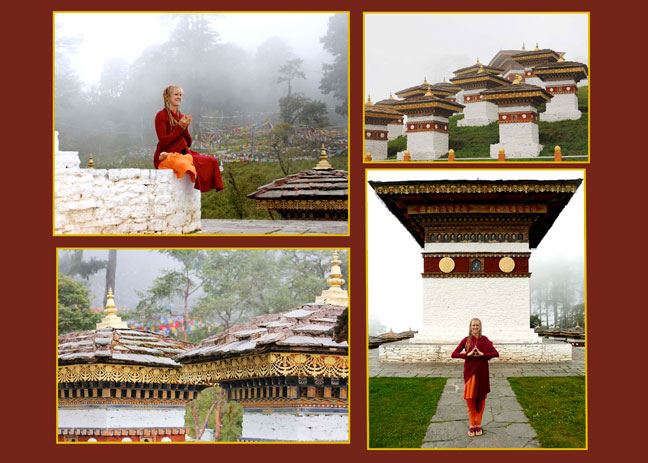 On the third day in Bhutan, the group traveled from the Paro Valley to the Punakha Valley for two days of sightseeing. The journey between valleys crossed over Dochula Pass at 10,900 feet (3,300 meters). The pass is crowned with 108 stupas of varying size, and the view from the top through the mist and clouds is stunning! 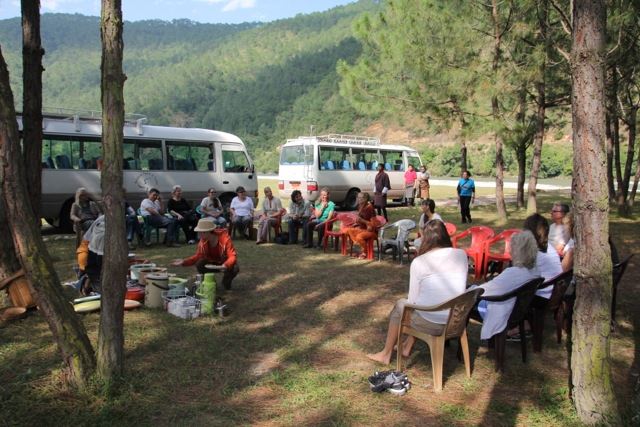 For lunch, Victor surprised everyone with a picnic lunch beside the Pho Chhu river, which means “father river” in the Bhutanese. Just downstream from the picnic spot is the confluence of the Pho Chhu and Mo Chhu (mother) rivers, which then continue together as the Puna Tsang Chhu. This confluence is the site of one of Bhutan’s most famous and important landmarks, the astounding Punakha Dzong fortress and temple. 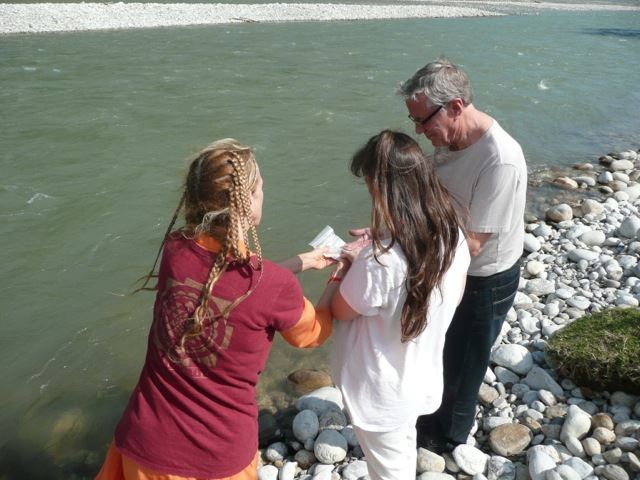 The auspicious river setting provided the perfect place for Kaliji to conduct a ceremony for Siva, her beloved tiger who had left his body 36 days before. The incredible flow story of Siva’s passing can be read here. Kaliji was joined in the ceremony by Siva’s close friend Kelli, Madan, John, Stephanie and also by TriYoga student and supporter Lakshman (Bob). A great lover of animals, Lakshman was the only person to write Kaliji a handwritten letter after Siva left his body. 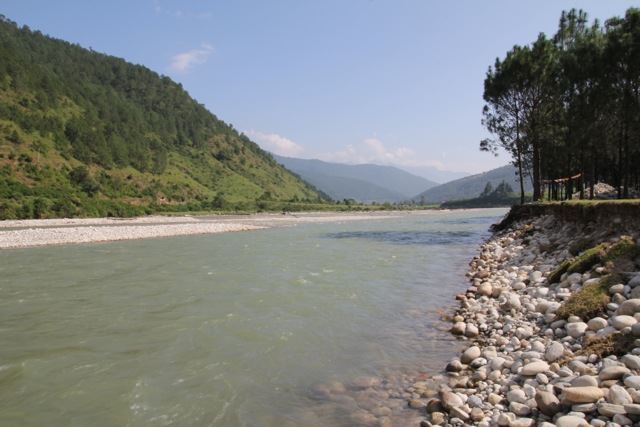 Siva’s ashes were released into the water at this beautiful place. 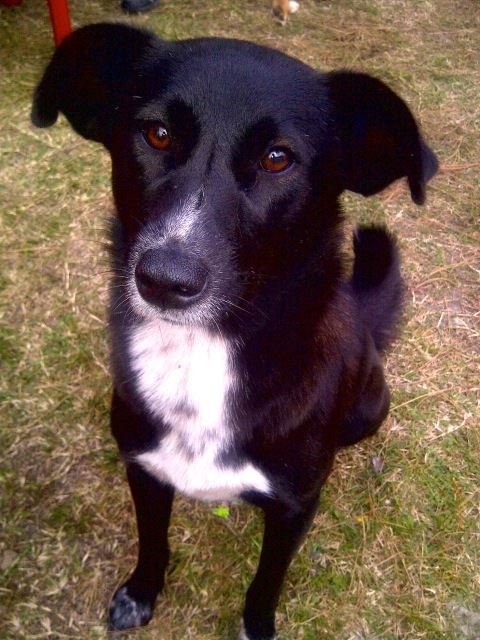 This friendly fellow sat on the riverbank and watched all of Siva’s ceremony. Afterward, he was the first to greet Kaliji and would not leave Kaliji’s side! 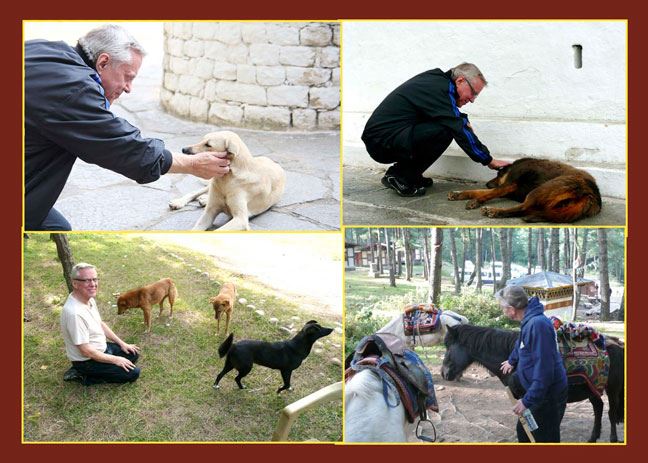 Throughout the Bhutan journey, Lakshman approached every animal he saw and gave them lots of love. Lakshman shows endless love and generosity to his animal friends by supporting animal shelters in his native Denver and around the world. 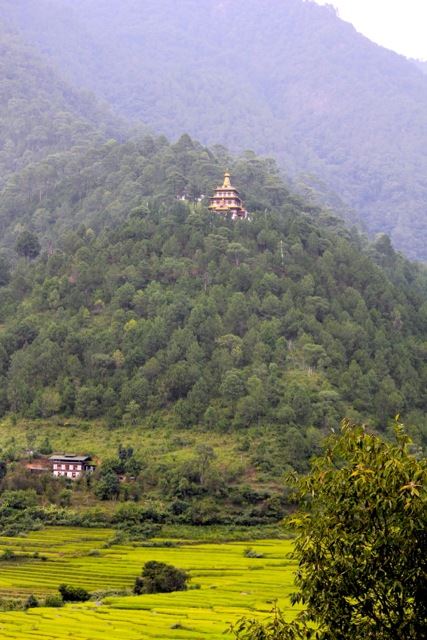 After the picnic, the group visited a Buddhist temple dedicated to the feminine aspect of the Divine. Situated high on a hill, reaching the temple required a steep and beautiful climb through golden rice paddies and green forest. 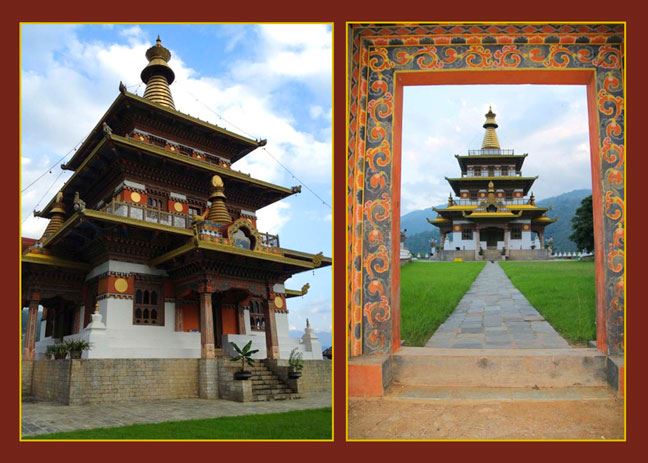 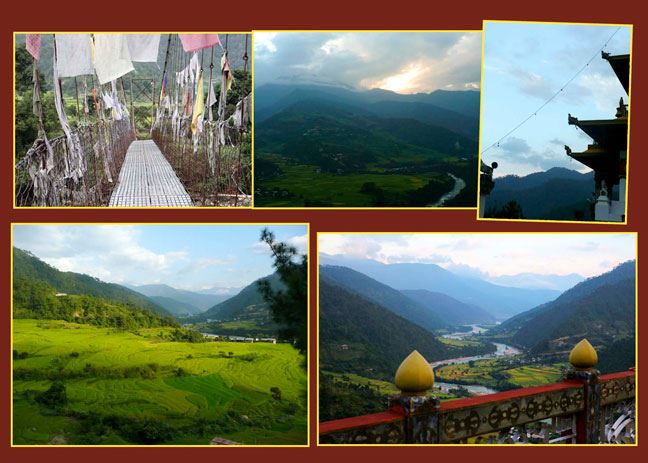 The following day started with an early visit to Punakha Dzong. Once the capital of Bhutan, the Punakha Dzong is still Bhutan’s most important site for government and religious events. 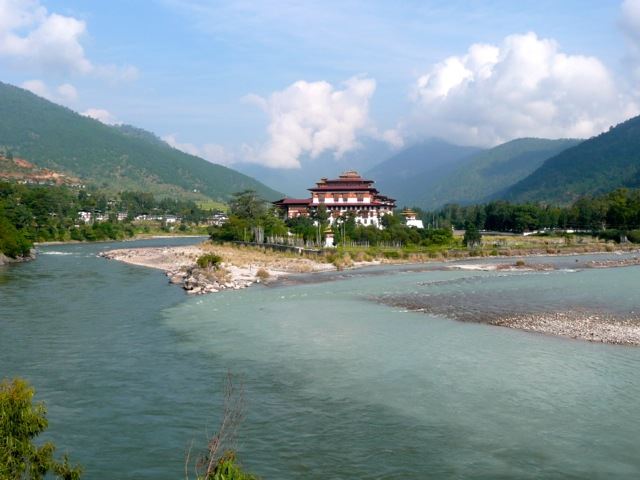 Punakha Dzong, at the confluence of the Pho Chhu (left) and Mo Chhu (right). 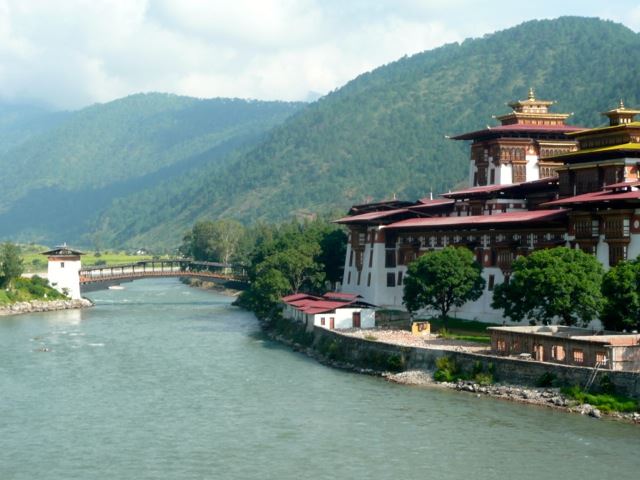 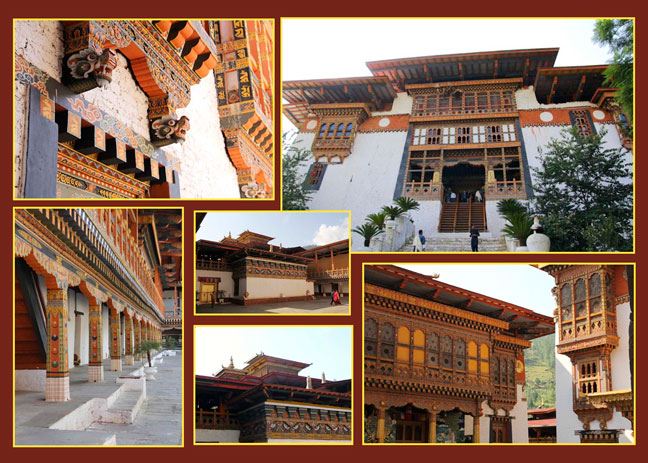 After departing Punakha Dzong and enjoying and afternoon of shopping in the capital city of Thimpu, the group returned to Nak-Sel for the remainder of the trip. 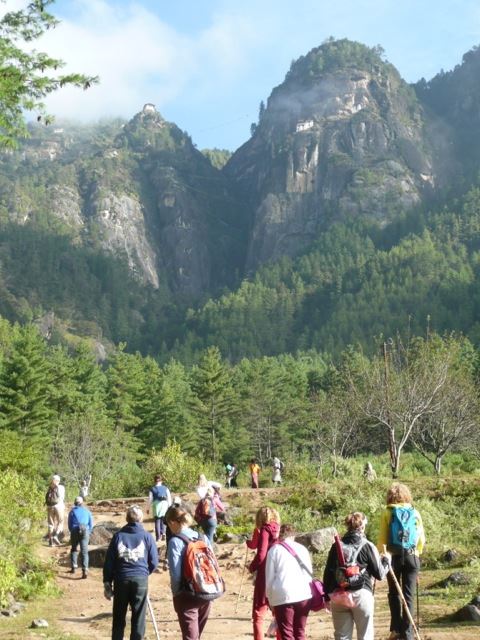 The final day in Bhutan featured a visit to the spectacular Paro Taktsang or “Tiger’s Nest” temple, built on a sheer cliff face about 3,000 feet (900 meters) above the valley floor. One of the most sacred Bhuddist temples in Bhutan, it is the site of caves where Guru Ripoche, the founder of Bhuddism in Bhutan, meditated for 3 years, 3 months, 3 weeks, and 3 days in the 8th century. Reaching the temple requires a very rewarding three-hour climb through thick forest, along steep rock walls and over a bridge covered with prayer flags. 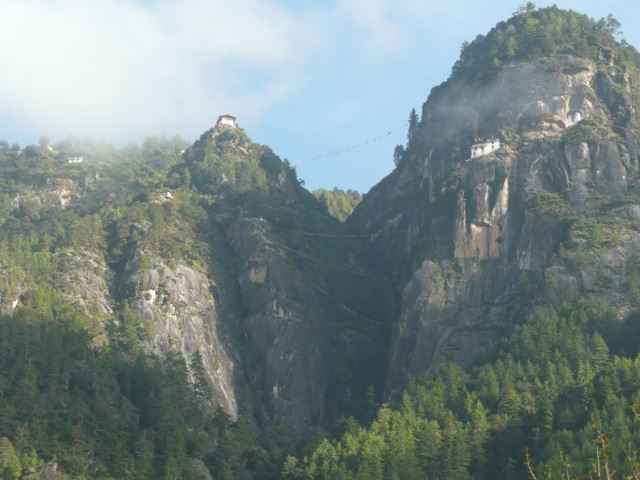 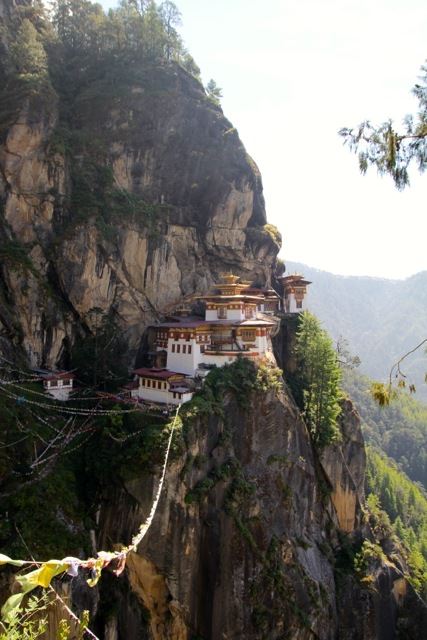 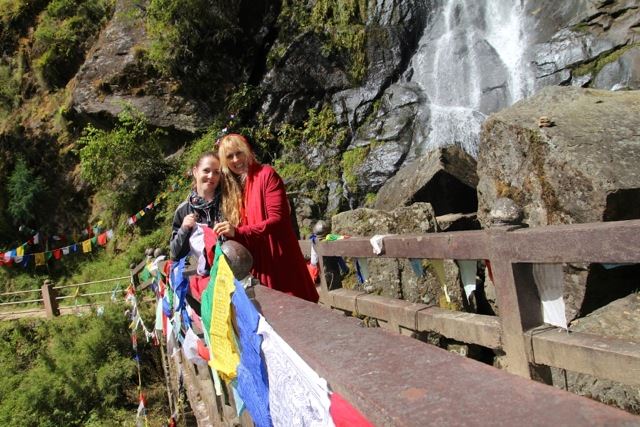 TriYoga teacher Keren carried flags to the monastery, and asked Kaliji to help her tie them to the bridge. 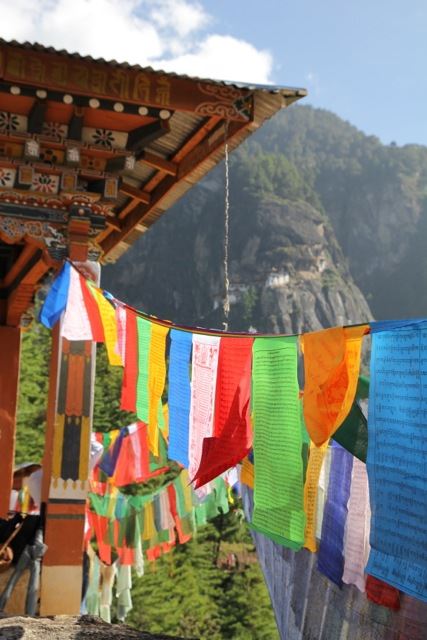