Chant Club and TriYoga in Israel

Chant Club performed and Yogini Kaliji offered classes at the 4th Israel Yoga Fest, May 23–25 at Gan HaShlosha National Park. Kaliji remained in Israel through May 28 and offered workshops in Kibbutz Afek, Megadim, and Tel Aviv. This was Kaliji’s fourth trip to Israel; she visited previously in 2006, 2010, and 2014.

Chant Club played an hour-long set as the opening band on the first night of Yoga Fest. Kaliji and Berni were joined by Dini on cajón.

Chant Club performed at the Yoga Fest closing ceremony. Kaliji guided a parade through the Yoga Fest grounds, singing the chant “Bolo Bolo” with Berni backing on guitar, while attendees joined along the way. Once the parade reached the main auditorium, Kaliji and Berni took the stage to join other musicians from the festival who were already playing the same chant. Together they played Bolo Bolo for 30 minutes while attendees danced nonstop!

Following Yoga Fest, Kaliji taught two days of workshops at Kibbutz Afek: three-hour Basics and Level 1 workshops on Sunday, and a five-hour Level 2 workshop on Monday. The Level 2 workshop was held at TY teacher trainer Anat’s studio on the kibbutz. 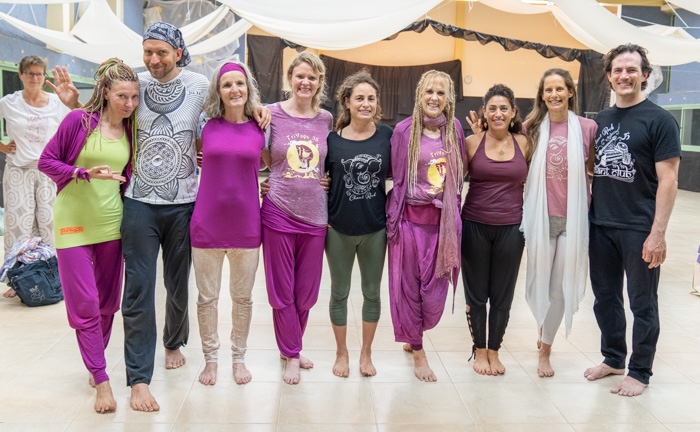 Kaliji taught a three-hour workshop at Megadim near Carmel Beach on Monday evening. 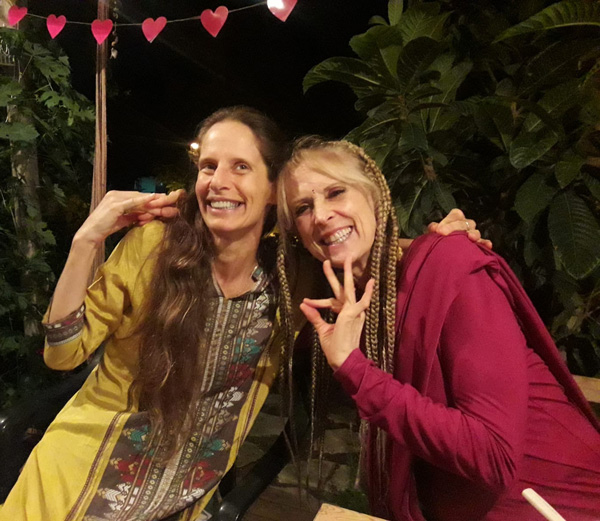 Special thanks to Anat for her wonderful organization. 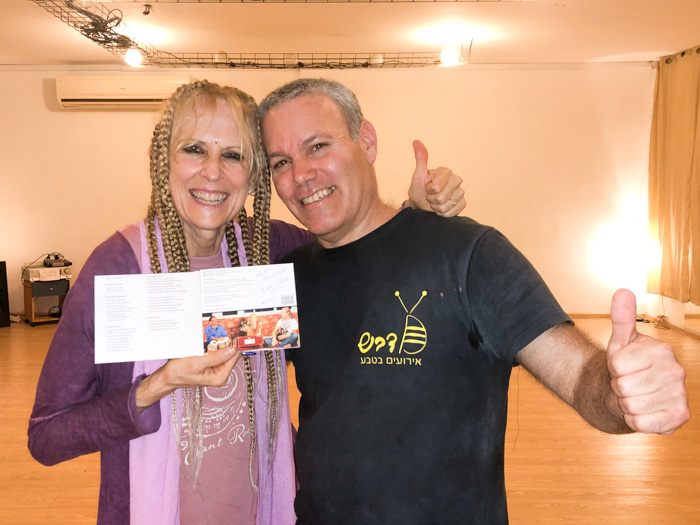 Kaliji taught a workshop at Zen Groove in Tel Aviv on Tuesday evening, organized by the Israeli Yoga Teachers Association. The owner of Zen Groove had a happy first meeting with Kaliji and received a copy of Yogis in the Sky.

Berni remained in Israel after Yoga Fest to celebrate his birthday with Kaliji and friends. On his birthday eve, Anat hosted a surprise birthday party at her home complete with an amazing vegan meal and birthday cake she prepared. Berni spent his birthday afternoon and evening demonstrating during Kalij’s workshop at Kibbutz Afek. The celebration continued into the next day at vegan restaurant Alf in Haifa.

Berni was invited to return to Alf for open mic night. Kaliji and friends enjoyed hearing Berni lead the open mic band, which included a singer and a keyboard player who were passing by on the street and joined for songs including an impromptu and rocking rendition of the Beatles’ “Hey Jude”!

The owner of Alf (pictured center) enjoyed sitting and talking with Kaliji and the TY group. The restaurant, located near Haifa Port, has a cool vibe with open air seating along the sidewalk and is open late. A yoga teacher from India passing by with two friends was drawn by TriYoga mudrā and was able to do it immediately.

Kaliji and friends also enjoyed a delicious vegan meal at the atmospheric vegan restaurant Rabbit Hole, located along a narrow street on the slopes of Mount Carmel above Haifa.

Rom and Gil, children of Anat’s brother, came to meet Kaliji upon her arrival to Kibbutz Afek. They were fascinated by mudrā. Gil just celebrated her birthday and all joined in singing “Happy Birthday” to her. TY Teachers Aditi and Alyona joined from Ukraine. Aditi is a gifted illustrator and Alyona is a talented clothes maker. Together they created Hanuman Clothes for yoga practice and life. Each piece of clothing has a unique design with original artwork. Hanuman Clothes (left to right): (left to right): TY teachers Kiki (Berlin, Germany), Anat, Alyona, Aditi, and Monica (Berlin, Germany). A farewell photo at Anat’s before Kaliji and team departed for Tel Aviv.
triyoga2019-06-08T11:30:57-07:00