Kaliji’s Yatra (journey) to India began on February 6. She was accompanied by students from US, Ukraine and Russia.

After 3 days in Sri Swamiji’s ashrama in Mysore, Kaliji went to Bangalore, to take part in the International Conference on Yoga and Naturopathy. 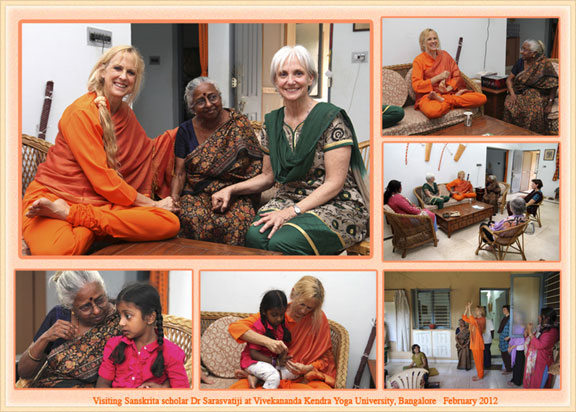 (Click on the images for larger versions of the collages)

On the way to Bangalore, she visited Sanskrit scholar Dr. Sarasvati Mohan, who teaches at Vivekananda Kendra Yoga College. TriYoga teacher Kamala (Davis, CA) was also visiting Dr. Sarasvati. Kamala, inspired by Kaliji, has been studying Sanskrit with Dr. Sarasvatiji via Skype for a few years. Now she traveled to India for the first time to deepen her Sanskrit knowledge and experience this country with Kaliji.

Dr Sarasvati was very happy to see Kaliji again, and she introduced her students to Kaliji. Among them was a young Sanskrit prodigy. Dr Sarasvati is sure that by age 7 the girl will know the whole Bhagavad Gita by heart! 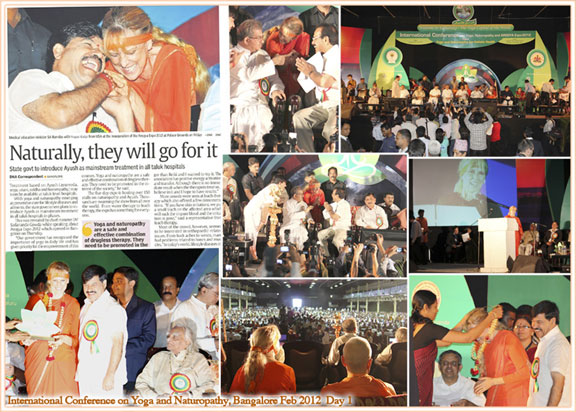 The highlight of this yatra was the International Conference on Yoga and Naturopathy (February 10 – 12), attended by over 5000 delegates representing over 32 countries. Kaliji was an honored guest and keynote speaker. The list of other dignitaries included: Chief Minister of the State of Karnataka, D.V. Sadananda Gowda; Medical Education Minister of Karnataka, S.A. Ramdas; philanthropist and the hereditary administrator (Dharmadhikari) of the Dharmasthala, Dr. D. Veerendra Heggade; B.K.S. Iyengar; and S.A. Ramdas, who expressed his joy in meeting her again.
The joyful moment of Mr Ramdas (who met Kaliji at the Dasara Yoga Festival in October 2011) was captured by the press and made it to the front pages of the Bangalore newspaper DNA India. Kaliji was interviewed by the government TV channels and the interview was broadcasted in over 70 countries. 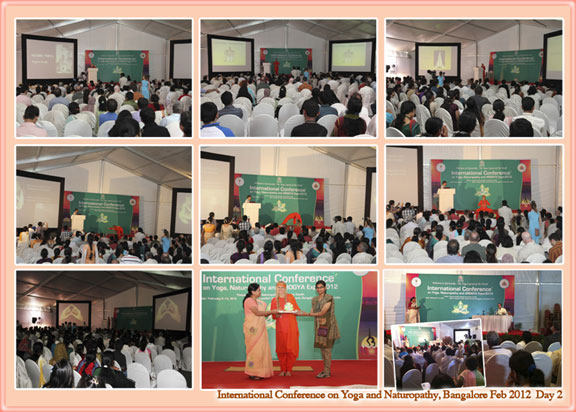 On the second day of the conference, Kaliji gave a presentation on Mudra Vidya, which included Devi Dance that was performed to the meditative chanting of Sanskrit mantras by Dr. Raghavendra Pai. Dr. G, who accompanied Kaliji on this trip, chaired one of the scientific sessions, and gave a concluding talk on yoga lifestyle and health, stressing the importance of ahimsa (non-violence) in one’s dietary choices. 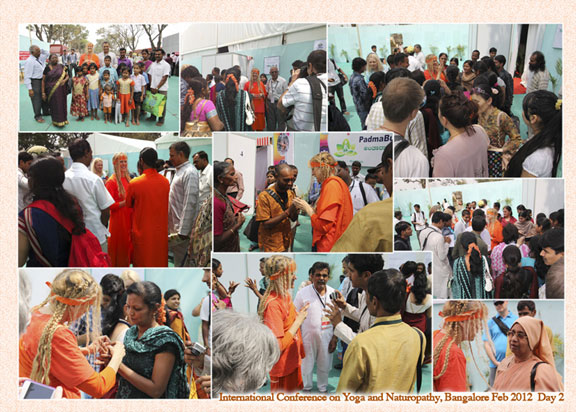 After the presentation, many came up to Kaliji to learn more about mudra, yoga, and health.

After the conference Kaliji and TriYogis (Padmasri (US), Hari (US), Anjaneya (Russia), Priya (Ukraine), Irina (Russia), Dr. G and Ganga (US)) took a flight to Kerala, which is called God’s own country. They spent the next few days in magnificent tropical beauty, immersed in yoga sadhana and nature.

On a 2-hour motorboat ride, enjoying the beauty of the backwaters of Kumarakom. 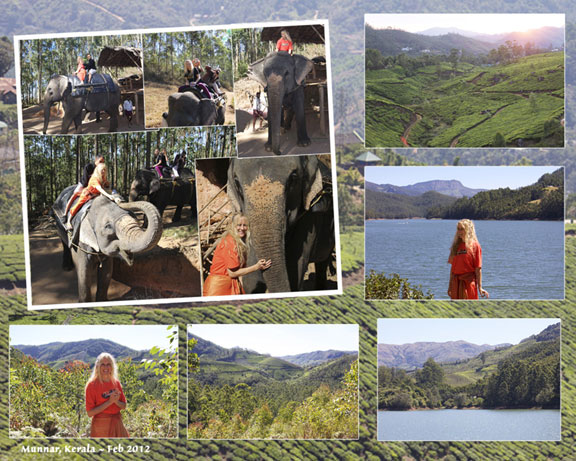 From Kumarakom the group went to Munnar, the famous hill station located in the confluence of three rivers. The mountains of Munnar are often referred to as the Himalayas of the South. Endless tea plantations add to Munnar’s spectacular views. The trip offered nature walks, a visit to the traditional Kerala theater to watch Kathakali, one of the oldest dance/theater performances, a visit to the spice garden and an elephant ride. Interestingly, the elephant that Kaliji was riding had the name Laksmi! 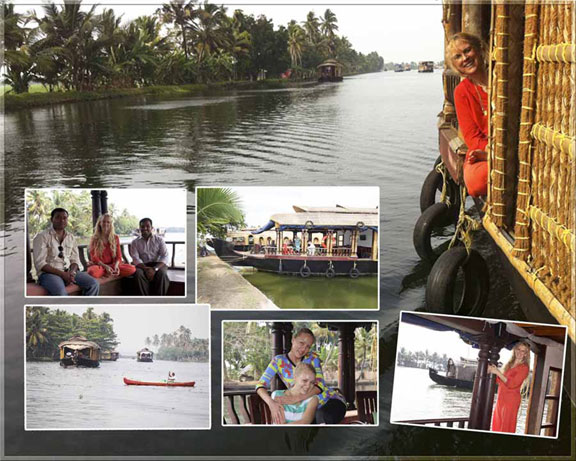 The last day in Kerala was spent on a houseboat cruising along the most beautiful back waters of Allepey. Two friends from Kerala joined the boat ride. 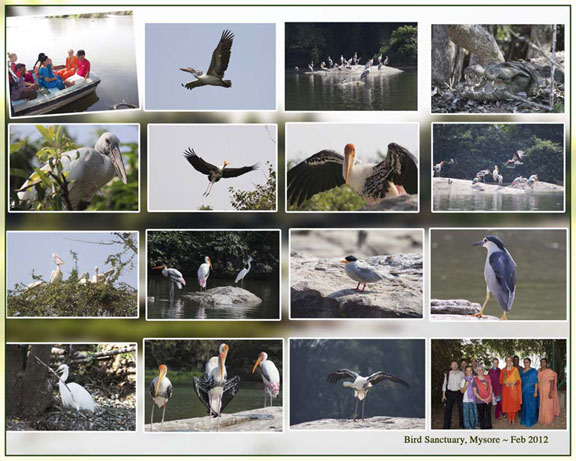 After returning to Mysore, the group enjoyed more nature. Kaliji visited the famous Ranganathittu Bird Sanctuary. The boat ride across the lake gives a chance to see a wide variety of birds, fruit bats hanging from the trees, as well as alligators. Hari’s family, who came from Hyderabad, joined this trip. 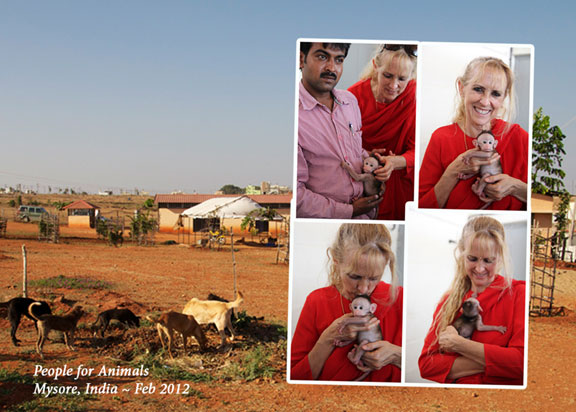 Visiting People for Animals (more on Kaliji’s first visit to PFA in October 2011), Kaliji met a little baby monkey named Ramo. He lost his mother and was saved by the PFA workers. Ramo will have to stay together with humans, as now he has human imprints that would interfere with his integration into wild life. It was the most heartfelt and touching experience. 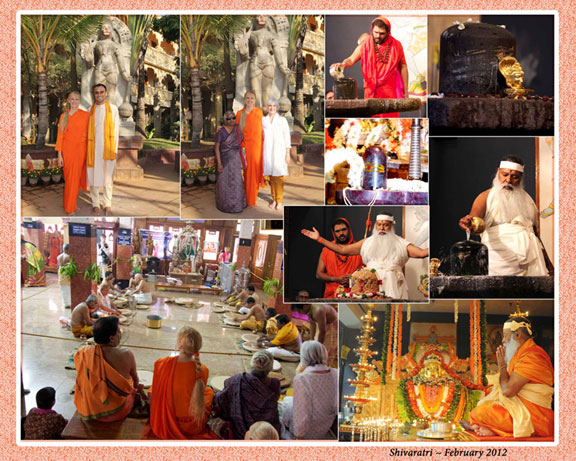 Shivaratri, the new moon in February, was celebrated in the Mysore Ashrama of Sri Swamiji. Dr Sarasvatiji, her son Nihar, and Kamala came to Mysore for these celebrations. The day was full of music, beginning with Sw. Manasa’s chanting leading the voices of those who were making sandalwood paste for evening offerings. From time to time, one of the people in the circle would stand up and dance to Sw. Manasa’s chanting. Throughout the day, beautiful pujas (offerings) were performed by Sri Swamiji, Bala Swamiji and ashrama priests. The evening/night program was all music. Renowned saxophone player Gopal Kadri performed a saxophone rendition of Sri Swamiji’s melodies. Sri Swamiji and the Celestial troop played a Music and Meditation Concert, accompanied by world recognized genius mridangam player Dr. Yella Venkateshvara Rao. The Maladi Brothers performed Sri Swamiji’s bhajans in the traditional carnatic vocal style, followed by chanting by Sw Manasa Datta and the ashrama musicians. The main arati (offering of lights) by Sri Swamiji concluded the program at around 5 am.