TriYoga was represented at the “Follow Your Flow” yoga conference in Beijing by senior teacher John and Chinese teacher MaMei. Held at a huge conference center complex in the north of Beijing, in an area also known for its hot springs, the official conference name (in common Chinese style) was “2015 International Famous Yoga Teachers Grand Ceremony & The 5th International Yoga Championship”.

The conference was a major event, attracting thousands of students. As the conference opening ceremony coincided with World Yoga Day (the brainchild of Indian Prime Minister Modi) on June 21, the Indian ambassador to China and other Indian and Chinese government officials were on hand. For the conference organizers and teachers, there was a “Red Carpet” entrance similar to at an entertainment awards show. John and MaMei walked the carpet together as TriYoga teachers.

John taught a 3.5 hour TriYoga workshop on June 22, the first day of classes at the conference. The workshop was given a prime time after lunch, and was much longer than any of the other classes. Except for a representative from TYC Beijing, the group of 40+ students were entirely new to TriYoga. John began with an introduction to TriYoga and a demonstration, then taught a four-season flow focusing on an all-levels Spring salutation. First all of the parts of the salutation were learned in detail, then the saluation was practiced for many rounds. Students picked up the TriYoga flow and felt it deeply, and many expressed their love of the class and their inspiration to continue with TriYoga. After class, John was surrounded by excited students eager for selfies! 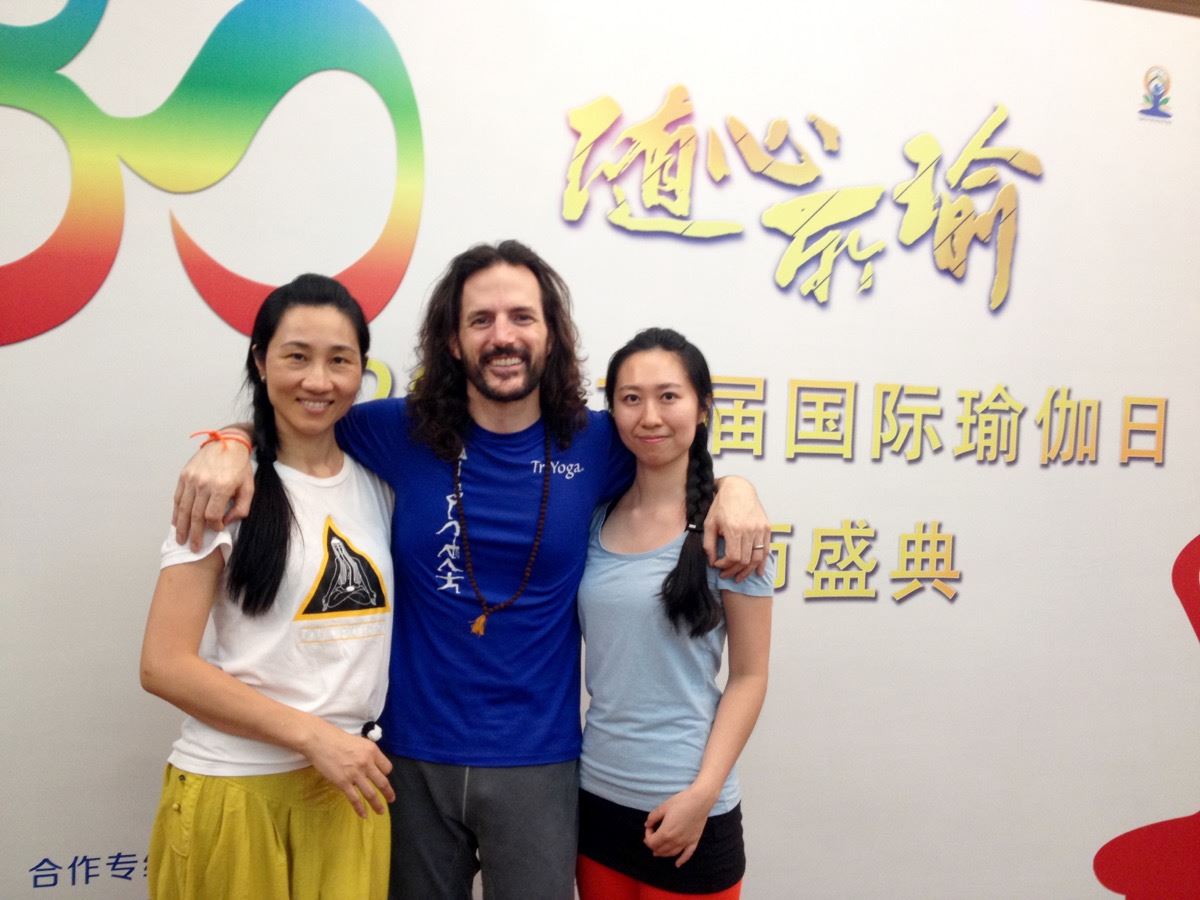 Ma Mei (left) was contacted first by the conference organizers and organized John’s conference workshop. Sisi (right), Ma Mei’s niece, provided translation. Both MaMei and Sisi are active TriYoga teachers, and they run a TriYoga studio in Shenzhen OCT as well as the TriYoga Retreat Center outside of Shenzhen. MaMei travels extensively in China to share TriYoga at conferences, festivals and workshops, and will begin her Junior Teacher Trainer internship in Tianjin in September with Santoshi. Ma Mei and Sisi were wonderful hosts for John—many thanks for their efforts to bring TriYoga to the conference and for representing TriYoga in China!

MaMei also taught a TriYoga workshop on the last day of the conference with great response.