Kaliji arrived in Baroda yesterday and was greeted with warm hospitality. 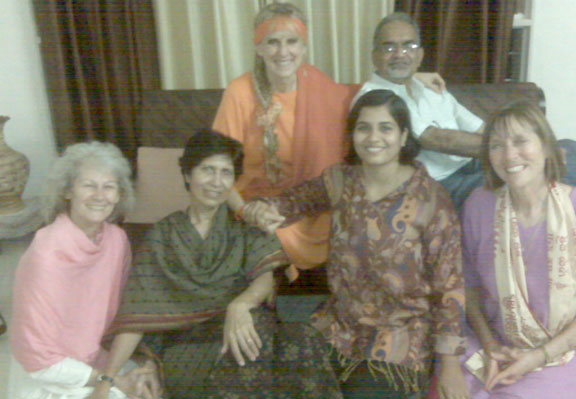 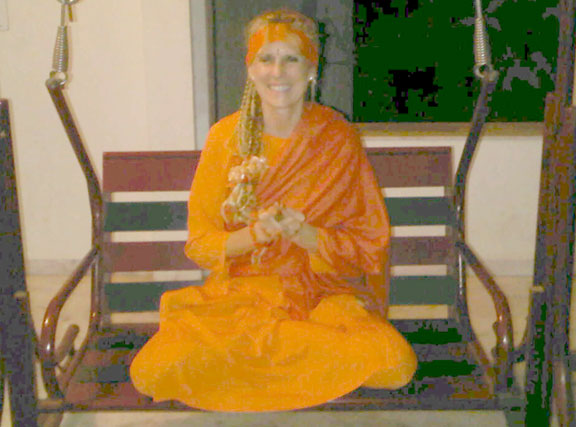 Kaliji on the swing at Anjali’s home 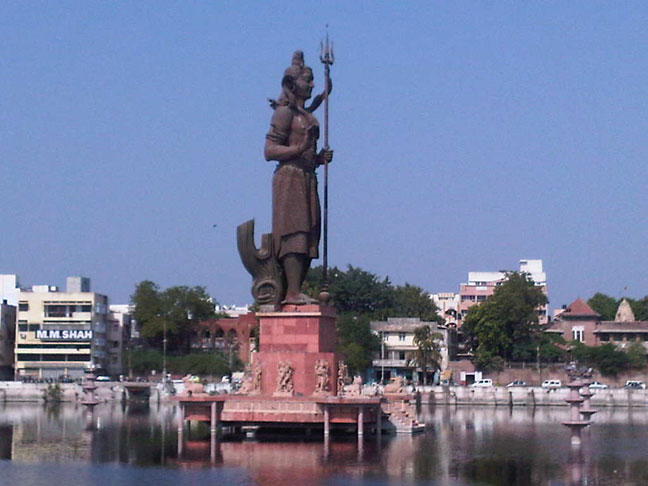 On Monday, Kaliji was invited to have a program at Maharaja Sayajirao University, Baroda with her very dear friend of 20 years, Dr Jayanti Patel. This magnificent statue of Shiva stands in front of the university.

Dr.Patel was sitting with the young “finger-puppet yogi” Virang, and Ramesh Pandya, Art Professor of the Performing Arts Drama Department who also draws Dr Patel’s wonderful cartoons for his books and other publications. 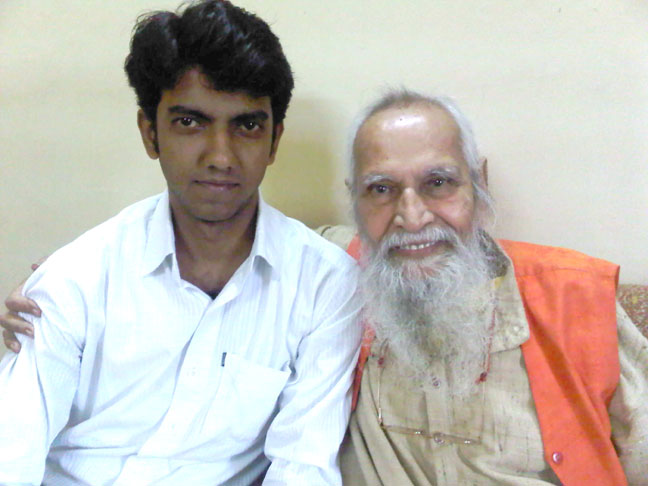 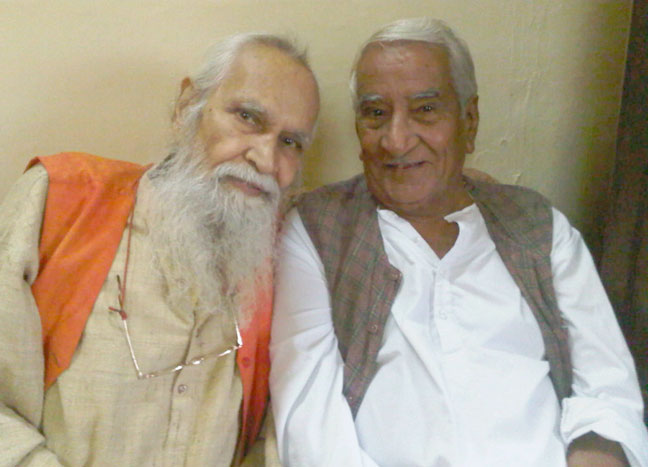 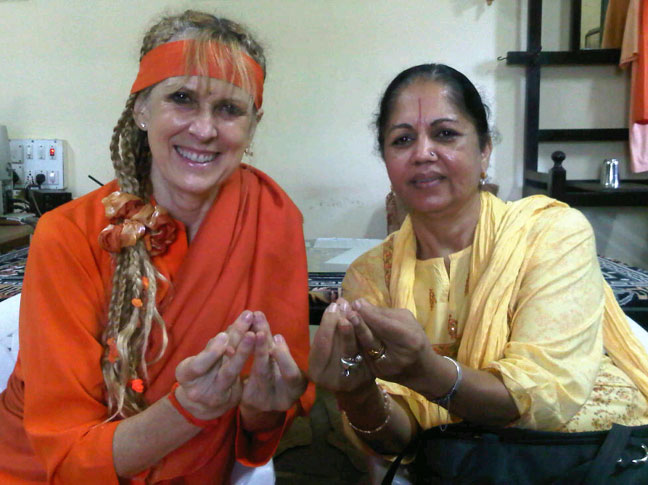 Also visiting with Kaliji was Professor of Dance, Dr. Parul Shab. Kaliji shared knowledge of mudras with her and had them flow spontaneously. While this happened, a new mudra was born. She was inspired with Kaliji’s flow and would like to work with her. 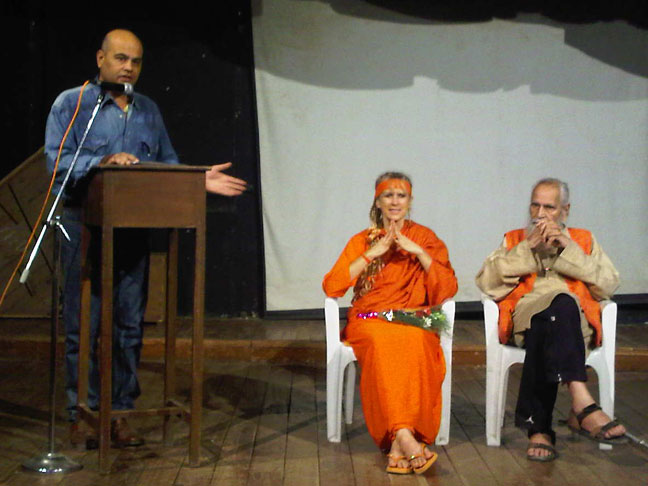 Kaliji and Dr Patel were introduced by Professor of Drama Literature, Mr Bhanuprasad Uppadhay in an intimate theater setting.

Dr Patel delivered a spirited inspirational talk on yoga as theater. He said, “Atman is dancing and the body is the actor with the five senses as the dress.” And, “Maya is nothing but an illusion. Enjoy life.” Also, “The sutra of today’s society is, “I have no time to tell you that I have no time.” “The purpose in inner theater is to bring you back to your Self.” “When you are in control of the inner world, you will be able to handle any challenges of the outer world.”

Dr Patel introduced Kaliji and she began with a tribute to him. Kaliji spoke about yoga not being about difficult postures, but rather about the flow of asana, pranayama and mudra with the intelligence of prana behind it that allows one to take the u-turn back to the Self. Kaliji demonstrated this graceful, dynamic TriYoga Prasara flow with the music of Sri Swamiji: Om Aim Hreem Shreem Siva Rama Anagha Dattaya Namaha. 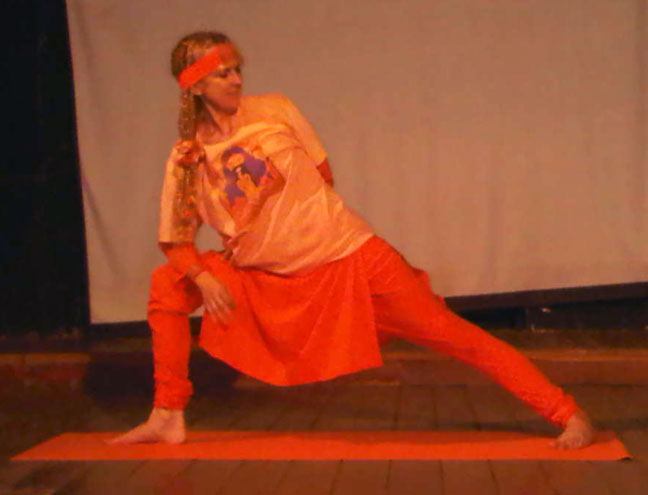 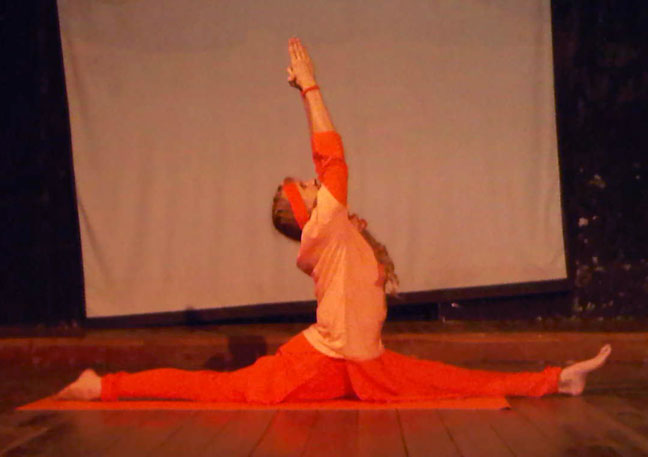 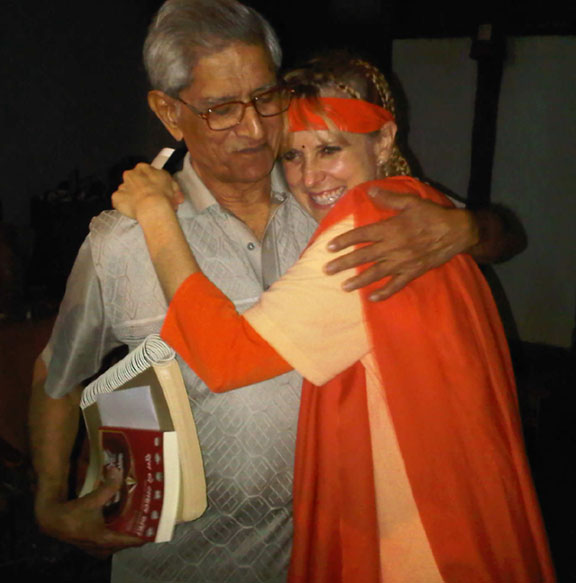 The tribute to Kaliji by Professor of Drama Literature, Mr Harish Vyash, afterwards was heartful, saying “Now I see yoga is really universal, as yoga began here, but you from the west is bringing it back to us in a way we have never seen. Most stop ashtanga (8 limbs) at asana. But you take it all the way the samadhi (8th limb).” 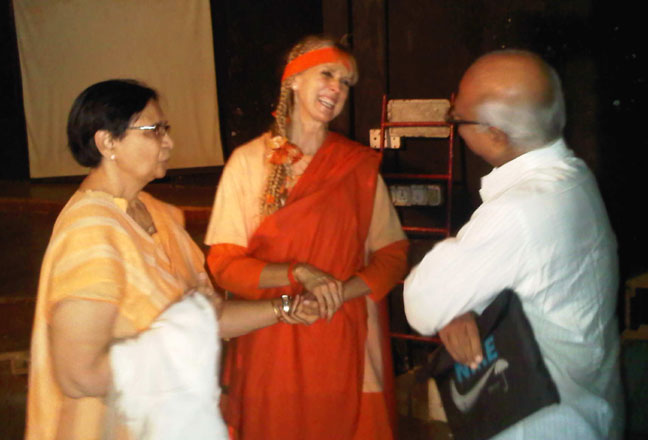 This professor from the University said that what Kaliji did had to be given from the divine, as she was so blissful. 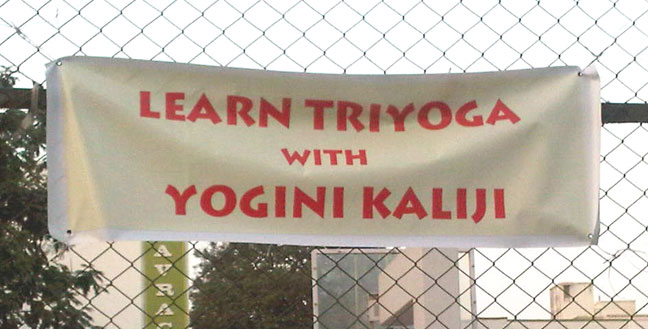 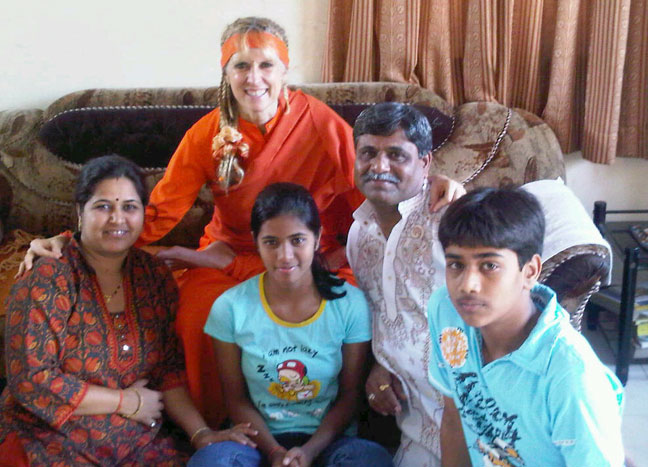 In between programs, Kaliji had lunch with this family of Datta devotees: Vidya, Aishwarya, P N Patel, Kshitig. Aishwarya plays the keyboard and Kshitig plays tabla. 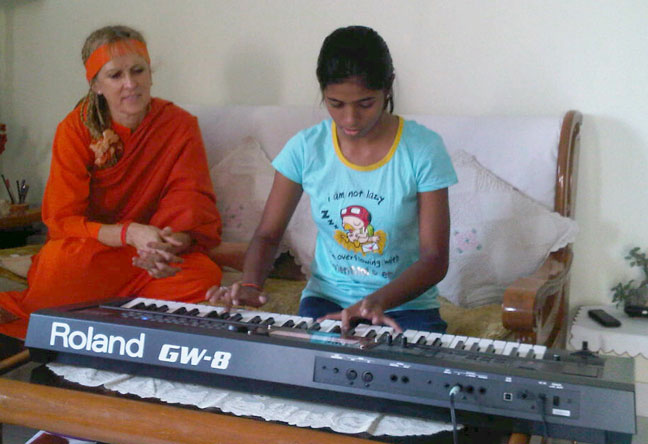 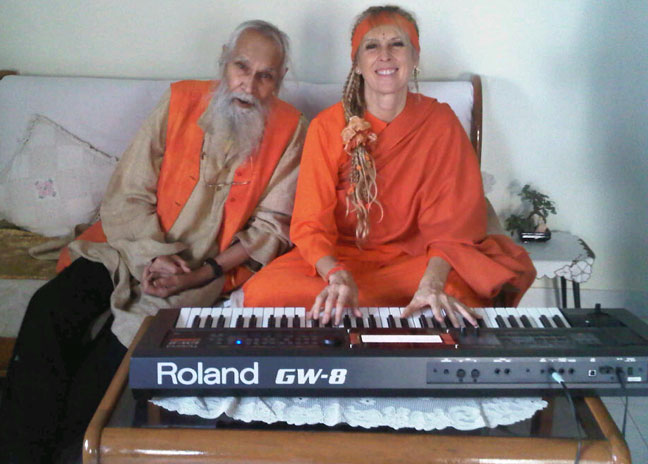 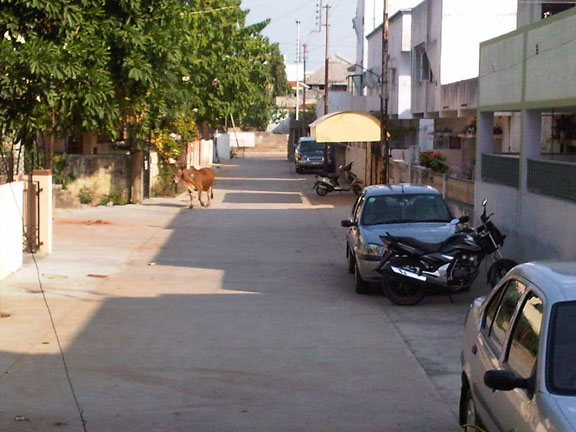 The next TriYoga program took place at Navrachna School (with students from 5 to 16 years). 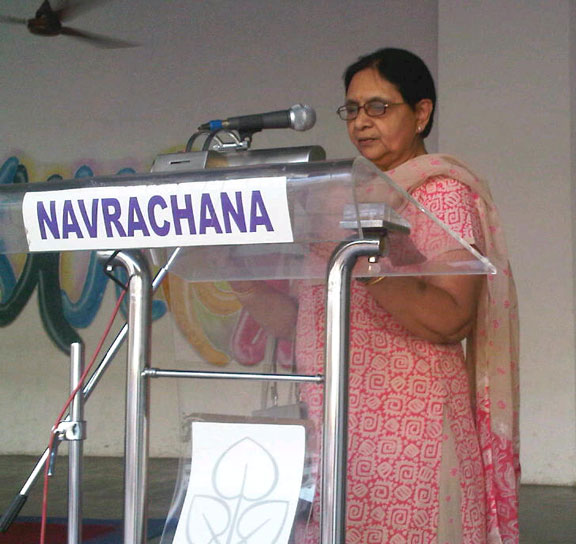 Kaliji was introduced by Sheela Mehta, wife of (the former) Col. Mehta who studied with Kaliji and was the founder of TriYoga Center Baroda. Many TriYoga teachers and students attended the program. 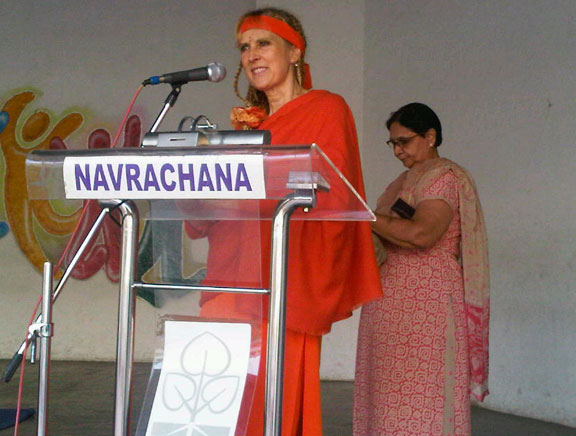 Kaliji spoke about the importance of inspiring the children to yoga, the great spiritual tradition of India. TriYoga represents the trinity of Sat Chit Ananda….one way to speak of this is the unity of posture, breath and mudra, ultimately flowing the prana to expand consciousness. 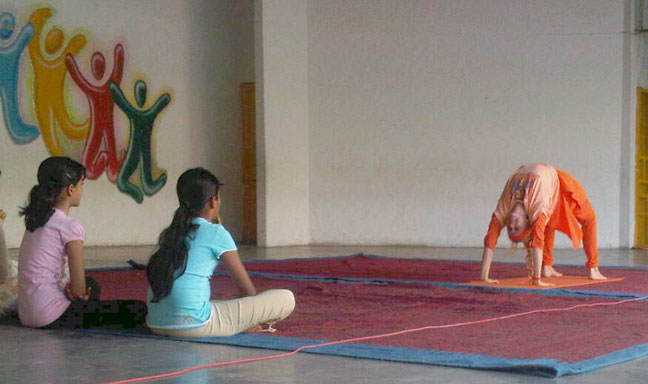 Kaliji then demonstrated the. Devi Dance flow to the appreciative audience followed by Lochan and Rajvi, young TriYoga students (about age 10) from Baroda who demonstrated. 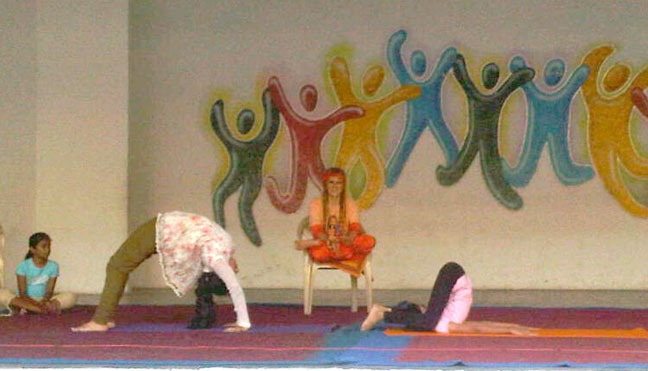 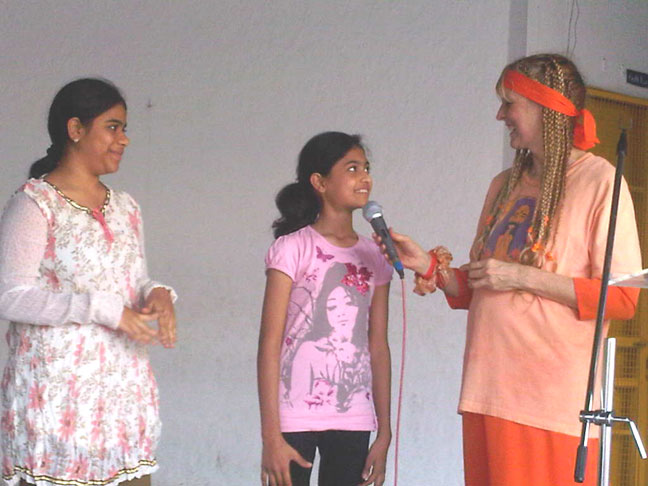 Kaliji congratulated them and asked them how TriYoga had changed them. They responded that it had improved concentration and made them calmer. One can start at any age.

A few students from the audience spoke and shared that they had enjoyed the presentation and would like to study TriYoga. 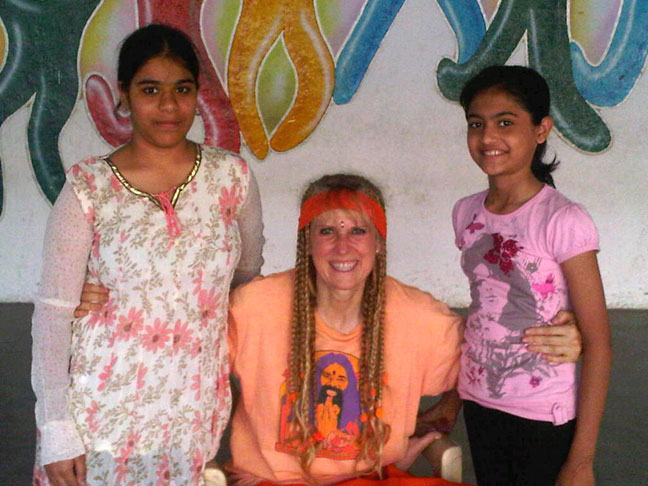 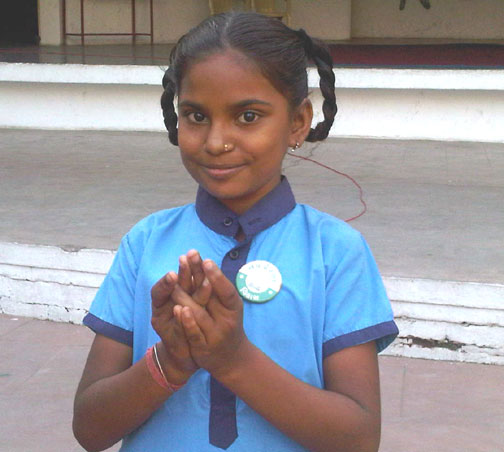 Following the session, Kaliji showed the mudras. This little one loved them…. 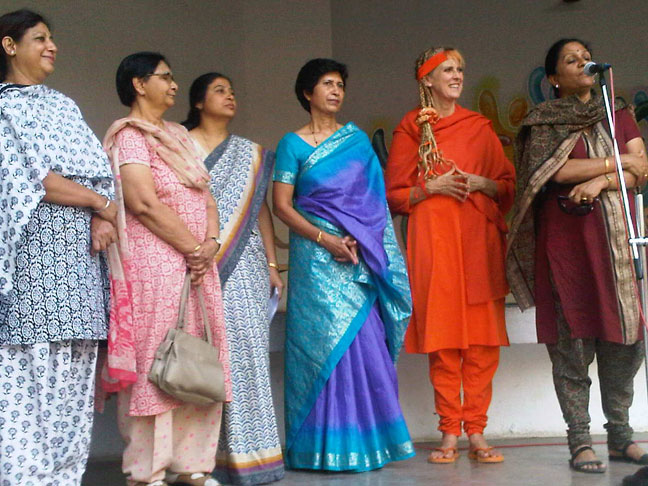 Kaliji with the Baroda TY teachers

At the end of the program the Vice Principal, Vijayalakshmi Nair, gave special thanks to Kaliji and to Anita, Anjali and Shilpa of the TriYoga Center Baroda. The Vice Principal has been a student of TriYoga for a year and a half and has brought many to TriYoga. 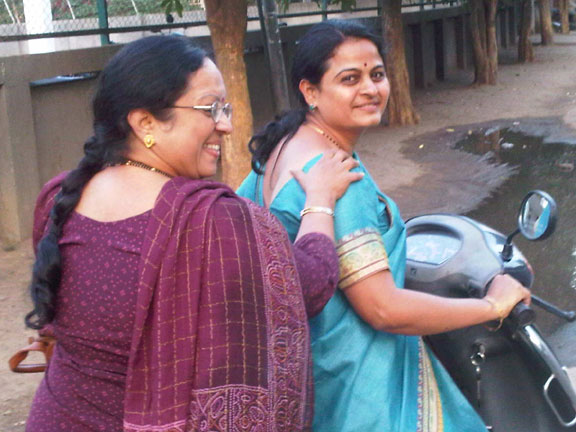 Vice Principal Vijayalakshmi Nair prepares to depart from the program. 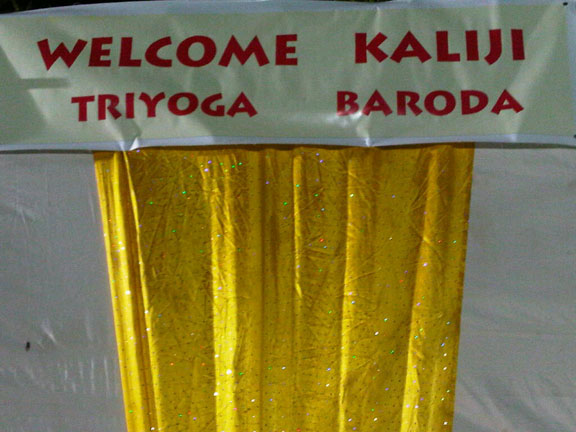 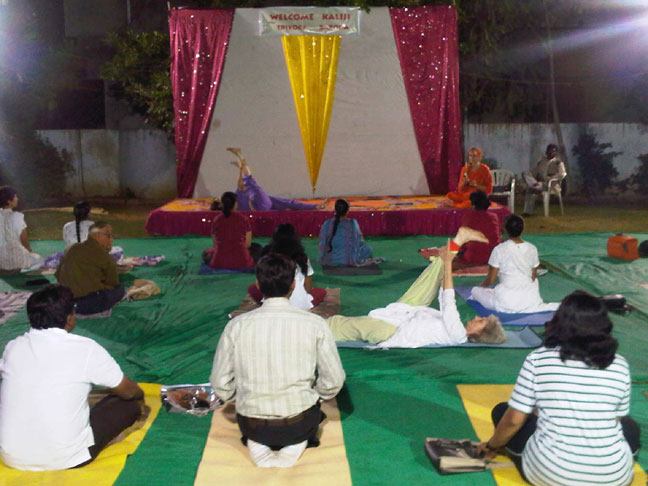 The TriYoga Prasara and Prana Vidya program was held outdoors at the TriYoga Center Baroda. The weather was perfect for the outdoor program. The students of all ages listened with complete involvement to Kaliji’s talk, inspirational and motivational, on the importance of regular sadhana. She then taught Basics Prana Vidya. 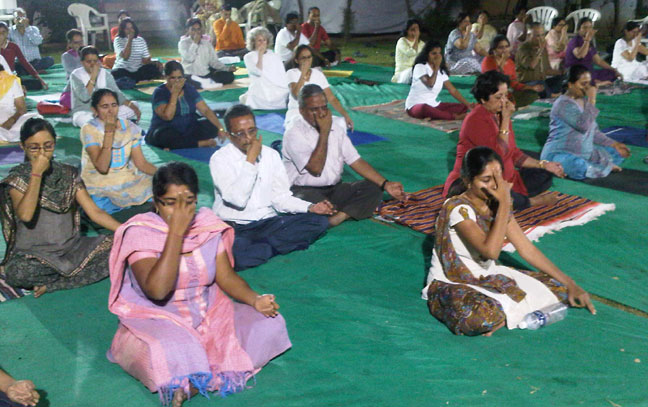 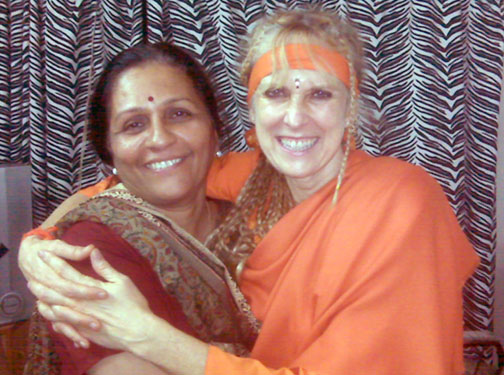 Kaliji had dinner at the home of TY teacher Anita. 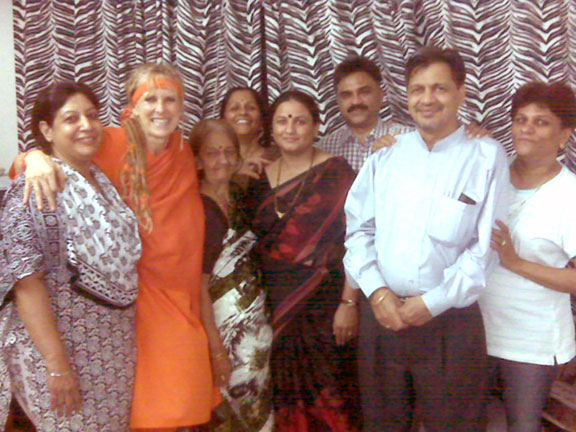