On Saturday Dec 19, Kaliji was in Bengaluru at Vivekananda Kendra, the foremost yoga research center in the world, to give a program on mudra at their 18th annual yoga conference.

Preceding Kaliji’s talk, a dance drama about Swami Vivekananda was presented. Kaliji gave awards both to those who made the drama possible and also to the actors and dancers.

In her presentation, Kaliji gave a history of Devi mudras, spoke of the upcoming publishing of the book by Sri Swamiji, and showed 108 of the Devi mudras. She gave a TriYoga Prasara demonstration showing how mudras are united with asana and pranayama. The audience responded throughout with appreciative applause. Kaliji closed with a tribute to Swami Vivekananda and thanks to Dr Nagendra.

After the presentation, many enthusiastic members of the audience came to talk with Kaliji including swamis, doctors and scholars. 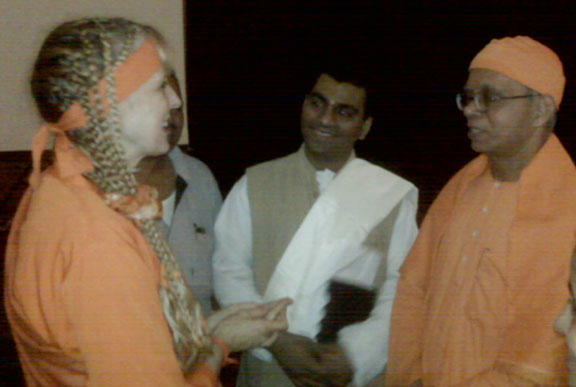 With the head of the Ramakrishna order in Delhi

Later, Dr Saraswati Mohan’s son Nihar spoke with Kaliji and brought her to visit with his mother, the well-known Sanskrit teacher. Recently she has published several new Sanskrit books. Kaliji gave a great tribute to Dr Saraswati who, with Kaliji, recently completed conferring Sanskrit names to the 108 Basics TriYoga postures. Previously, she helped with the Sanskrit words and markings in the Prana Vidya manual. 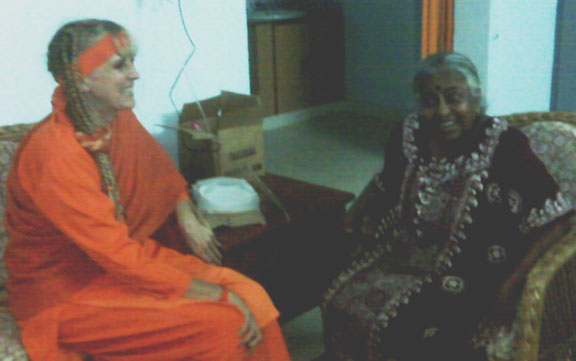 Dr Saraswati and Kaliji will continue working together to name postures within the other levels and to work together on many other projects.