A workshop on Integrated Yoga Therapy for Autism Spectrum Disorders (ASD) began February 25
at Sri Swamiji’s ashrama in Mysore. Following is the report from the Star of Mysore newspaper: 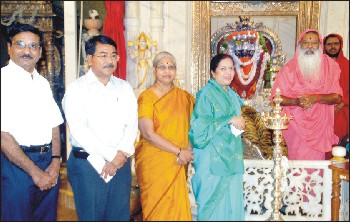 About 1,000 therapists are taking part in the one-day workshop which is being held in two Sessions.

The valedictory of the workshop will be held in the evening with Rajendra Kumar, Commissioner of Income Tax, Mysore, as the chief guest.

The participants covered ‘Principles and psychology of integrated yoga therapy with scientific evidence,’ ‘The five koshas as a model of health and the role of body exercises for each of the koshas’ and ‘Neuro-psychology & yoga,’ in the first session.

At the second Scientific Session, the following topics were covered: (1) Datta Methodology for Enhancing Learning (DMEL) and Autism Spectrum Disorders (ASD); A Pilot Study Report, (2) Role of Psychology, Assessment, Evaluation and Counselling, (3) Pranayama – Major pranayamas and their effects on each of the koshas and their uses in Yoga Therapy.’